New York’s 421a Tax Abatement Is Dead. Now What?

The city’s biggest and most lucrative tax incentive to build affordable housing expired June 15, and the chances for a replacement remain remote 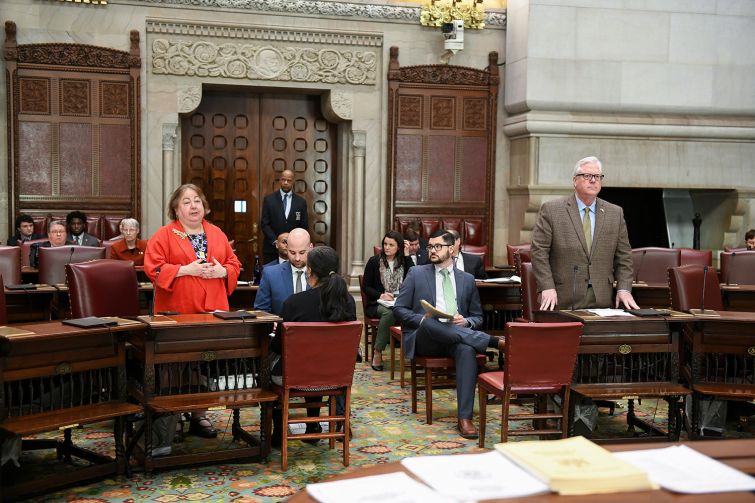 On the day when a lucrative tax subsidy for New York City developers finally lapsed, real estate stakeholders and state lawmakers remained far apart on its need (or effectiveness) for solving the city’s housing crisis.

Several property owners spent the past few months in a mad dash to break ground on foundations for new rental properties before the June 15 deadline to take advantage of the abatement, known as 421a or Affordable Housing New York. But as average rents topped $5,000 per month in Manhattan, industry leaders warned that construction of below-market-rate units would slow to a trickle in the future if the now-expired abatement was not renewed.

“Anyone with any clout whatsoever got their piles in before the deadline, but long term the expiration is a surefire way to slow housing production and raise rents even higher than they are today,” one Brooklyn-based developer told Commercial Observer.

That threat did not bother legislators, who happily let the incentive die on its own.

“Real estate is welcome to build under a capitalistic model, but if they’re going to take tax credits they’re supposed to be giving us something for public good in exchange, and this program has flunked this test,” said Liz Krueger, chair of the state Senate’s Finance Committee. “At a time when the market is incredibly hot and people continue to build throughout high-end areas of the city, I don’t think anybody in the Legislature thought it was a great idea to give giant tax exemptions for activity.”

The tax incentive allowed developers to skip paying property taxes on new construction projects for a decade or longer in exchange for offering rental units at prices that would be affordable to the average family. Over the past decade, some 3,000 properties in the city, or about 117,000 units, utilized the 421a program, according to a New York University Furman Center report. A Real Estate Board of New York study estimated that more than half, or 56 percent, of all multifamily residential units built in the last eight years have applied the tax program.

But critics assert that the law enabled the construction of luxury rental apartments where a portion of its affordable units were at prices as high as 130 percent of a household’s area median income (AMI), well above what an average family could reasonably afford. For the opportunity to build these units, the city relinquished collecting $1.77 billion in property taxes over the past fiscal year, City Comptroller Brad Lander’s office calculated. (Property owners disputed the comptroller’s estimate, arguing the figure was merely theoretical because developers would not have built their properties without the incentive.)

Hours before the incentive expired, New York Mayor Eric Adams unveiled his housing plan, which would invest $22 billion into affordable housing projects, including an additional $5 billion over a 10-year period. His plan includes zoning incentives that would encourage affordable housing development and a tax break that would galvanize the construction of child care facilities.

But Adams administration officials warned that without an additional abatement from Albany that could be used in conjunction with programs, like mandatory inclusionary housing, it will be difficult for the city to reach its goals.

“This tool for the creation of housing should not be understated,” City Planning Commissioner Dan Garodnick told CO. “We are extremely worried about the impact it is going to have, and we will continue to make that case.”

A deal falls through

The Legislature’s hostility to the tax subsidy began six years ago when then-Gov. Andrew Cuomo brokered a deal with real estate and labor leaders to renew the program after it had expired earlier in the year.

The 421a tax subsidy was created a half-
century ago but must be renewed periodically, and it was due to sunset in June 2016. Cuomo signaled in the spring of 2015 he would block the incentive’s renewal unless developers paid union contractors prevailing wages on their projects. Negotiations between the Real Estate Board of New York and construction union leaders dragged on for months until Cuomo nudged them in November 2016.

But Cuomo made the arrangement without input from the Legislature. State lawmakers resented swallowing the new law, which included a 35-year property tax abatement that was 10 years longer than what then-Mayor Bill de Blasio wanted. The new units weren’t particularly affordable, either. A majority of new units advertised between 2019 and 2021 were affordable to households earning 130 percent of AMI, the Furman Center found.

“They went into a room and worked out a deal that was great for them but had nothing to do with production of units of affordable housing,” Krueger said. “I believe that entire deal was a violation of legislative function and should never have been allowed to happen.”

When it came time for Gov. Kathy Hochul to advance her version of the abatement in this year’s budget, lawmakers in both houses dug in against it. In January, Hochul introduced a plan, renamed 485w, that tweaked affordability levels for a quarter of the units of a new rental project in order to become eligible for the tax break.

REBNY argued the modified incentive was a crucial tool, and got the building trades and property service workers’ unions in their camp early. The newly inaugurated mayor was on board as well.

But housing advocates almost immediately lambasted the measure as a giveaway to developers that would do little to create affordable units or alleviate the high cost of housing for existing renters.

“The 421a incentive is a fix for the fact that multifamily rental properties are shouldered with a huge burden of the city’s property taxes,” Cea Weaver, campaign coordinator for Housing Justice for All, a grassroots tenants coalition, said. “It drives up rents for every other building that isn’t getting the tax exemption, and that’s bad for tenants. Ultimately it’s not a very good way to subsidize the production of low-income housing, and that’s what we need to focus our subsidies on.”

Progressive legislators soon told the governor’s office they wouldn’t support the law’s inclusion in the budget without further revisions.

“I and others pointed out early on that it was not going to meet our needs and I would oppose it as it was,” said Brian Kavanagh, a Manhattan state senator and chairman of the Housing Committee. “It wasn’t likely to occur in the budget and there wasn’t support in the Senate because it needed a better balance of jobs and affordability.”

Brooklyn Assemblyman Steven Cymbrowitz, who leads the Assembly’s Housing Committee, tried to make a deal between his colleagues and the governor’s team to lower AMI ranges but found the governor was not receptive to further alterations.

“In our conference, many of the people felt that [AMI levels] didn’t go deep enough,” Cymbrowitz said. “I don’t agree with those who say, ‘Well, let’s get rid of the whole thing and not try to figure out how to build more housing.’ The demand, especially by elected officials, is to have the lowest bands of AMI, and it’s really difficult to provide that without some sort of incentive, whether it’s through a tax exemption or through a government program.”

Once Gov. Hochul took her proposal out of the budget, it spelled the end of the 421a program. Several lawmakers said they did not engage in talks with the governor about reviving the tax incentive in the weeks after the budget passed. It’s now election season, too, making brash legislative action all the more remote. Meanwhile, real estate stakeholders have begun planning for next year’s budget.

“New York City’s housing crisis will only get worse without one, and we’ll lose much-needed family-sustaining jobs in the process. As we approach the next legislative session, we are hopeful that lawmakers will work productively with our growing coalition to address the city’s housing crisis,” 32BJ SEIU President Kyle Bragg, Building and Construction Trades Council of Greater New York President Gary LaBarbera and REBNY President James Whelan said in a joint statement.

In early June, just before the session ended, lawmakers passed a bill creating an Affordable Housing Commission that will discuss how to tackle the housing crisis.

Its 25-member body, appointed by the governor and legislative leaders, will include tenant advocates, property owners and labor leaders who will consider a number of proposals that didn’t pass the Legislature over the past year before submitting a report in December. Lawmakers indicated that the group would likely take another crack at the 421a tax subsidy in the coming months, including whether to use more targeted AMI levels for different neighborhoods.

“If we’re going to move forward, we need a technical evaluation of how the numbers will work,” Kavanagh said. “It is important we look at any tax program to see what activity is incentivizing. There is some concern that the housing that it creates may or may not serve people in the neighborhood.”

Some developers would like to see a buffet of options that include different AMI bands tied to the length of the tax abatement or a property’s location. Other new projects could include a zoning bonus to build higher or denser with greater levels of affordability. There could even be room to include existing buildings to opt into an incentive program to reduce property taxes, perhaps following a unit’s renovation.

“There are tweaks that could be made that would probably satisfy the development community and those concerned about the far-lasting impacts of 421a on the other side,” said Brett Gottlieb, a partner with Herrick Feinstein’s real estate department. “Otherwise you’re not going to see developers go forward with multifamily projects where they’re required to provide middle- and low-income affordability in exchange for additional floor-to-area-ratio if they’re paying full-freight taxes. The economics just doesn’t work.”

If the New York State Legislature makes no progress on a new incentive this year, developers could begin to look toward investing in areas with fewer zoning regulations. Some New York-based firms are already exploring investments in the Southeast and Southwest because New York City is becoming too expensive to build, real estate attorneys say.

“My clients are literally going to Texas and Florida,” YuhTyng Patka, chair of Duval & Stachenfeld’s NYC Real Estate Tax and Incentives Practice Group, said. “They have not completely abandoned New York City, but they are prepared to if New York continues on the path of not being friendly to tax incentives. When you have the likes of Florida and Texas competing for developers who contend they are much friendlier environments to build, a brain drain follows along with housing.”

If that happens, state governmental leaders will have more to worry about than whether a tax incentive is not doing what it was designed to do.

“The dynamic was that the legislative leadership saw the issue as the industry’s problem,” one Manhattan developer said. “In a few years, it will be their problem.”