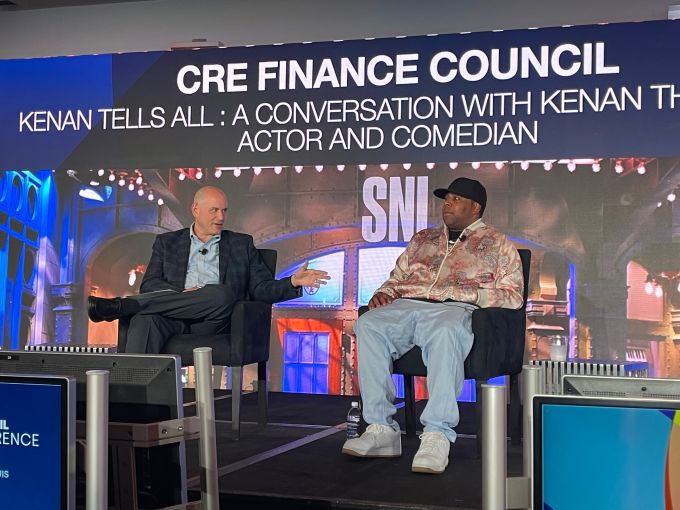 There isn’t a ton to laugh about in commercial real estate right now, with various headwinds blocking transactions left and right, but thankfully the keynote speaker at CREFC’s annual June conference brought plenty of laughs to the room.

Kenan Thompson of NBC’s “Saturday Night Live” was interviewed by Eric Thompson, global head of structured finance ratings at Kroll Bond Rating Agency, and spoke to a packed room. The “SNL” actor and comedian recently completed his 19th season at the hit show, and is its longest-running cast member.

As someone who received an Emmy for outstanding original music and lyrics and multiple nominations over the years for both outstanding lead actor and supporting roles, Kenan shared his passion for performance art, “SNL” and music with the audience — with a classic touch of his trademark humor.

Aside from sharing behind-the-scenes stories of his sketches at “SNL,” Kenan believes it’s important to promote diversity and inclusion in any industry. “We need inclusion, we need open conversation,” he said. “It’s fine to be on different sides of the aisle because not everybody’s experiences are the same, but there should be a common ground with humanity.”

Established in 2020, the Woman of the Year Award honors a woman in commercial real estate finance who, through her engagement in CREFC and other organizations, has enhanced and improved the industry.

“The women’s group has always been a close team,” said Glick. “Members are creative, hardworking and supportive of each other. That’s how we’ve gotten where we are. But this year, given your commitment, and support under such extraordinary circumstances, I feel like I should share Woman of the Year with the other women in this room who hold everything together no matter what. Today, we are all Women of the Year”