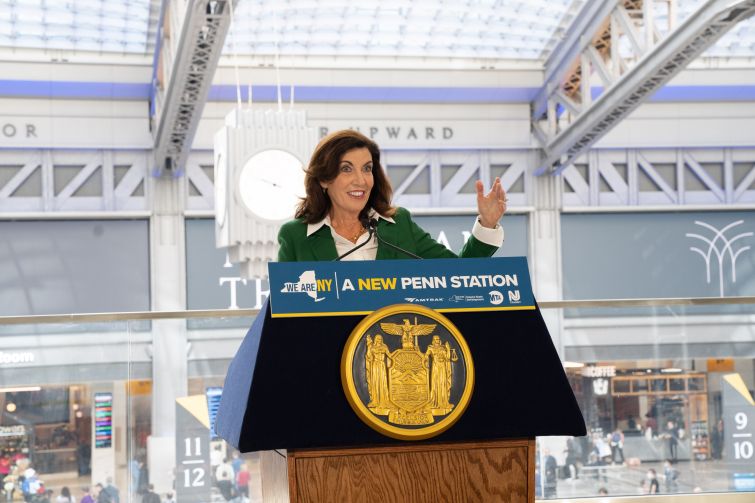 Governor Kathy Hochul announces that the Metropolitan Transportation Authority, in partnership with Amtrak and NJ TRANSIT, is requesting proposals from architecture and engineering firms to guide the Penn Station reconstruction effort recently outlined in the Penn Station Master Plan study that was announced in the fall. Photo: Don Pollard/Office of Governor Kathy Hochul

Scott Fitzgerald once said that the test of a first-rate mind was being able to hold two contradictory ideas in one’s head at the same time and still retain the ability to function.

Was Scott talking about the New York real estate market?

Because the signals are downright mystifying. On the one hand, office attendance is still terrible. Like, really terrible. According to research by Placer.ai, compared to May of 2019 total visits to office buildings in New York were down 40.6 percent. And that’s actually good in comparison to Chicago (down 45.7 percent) and San Francisco (down 67.8 percent). Yes, all three markets have been showing improvement from earlier in the year (even though San Francisco’s office usage declined during April) but these are bad numbers to see well more than a year after COVID vaccines became widely available. If these kinds of trends continue, it could spell true disaster for the office market.

Just how bad a disaster?

NYU Stern School of Business and Columbia University Graduate School of Business put out a report saying that U.S. office buildings could lose $500 billion in value by 2029 – 28 percent of their overall worth nationwide. The report used the word “Apocalypse” in its title.

And yet multifamily property has never looked more in-demand or more valuable in Gotham’s 398-year history.

According to a report by Douglas Elliman the average monthly rent in Manhattan now stands at $4,975. (This is a record figure.) The average studio – a single room, for goodness sake! – averages $3,088, up 25 percent in a year. Moreover, the vacancy rate has been below 2 percent for the last six months, with listing inventory down 70 percent from what it was last year.

In fact, it’s such a tight inventory that brokers are charging as much as 40 percent of a year’s rent on their broker fees, and bidding wars are breaking out on desirable apartments.

As good as this is for multifamily landlords, this is not a healthy or stable situation, and it’s certainly not good for New York City renters. Given the fact that the New York state legislative session ended with the future of the 421a development incentive essentially doomed, one could expect that the problem could get a lot worse.

Thankfully, on Tuesday Gov. Kathy Hochul signed legislation expanding the state’s ability to convert distressed hotels into housing. Hopefully this will eventually ease some of the city’s housing scarcity.

A place that seems to be having similar multifamily demand (but not as severe work-from-home problems) is South Florida.

One of the early embracers of South Florida was the legendary New York real estate figure Richard LeFrak, who first started developing in Miami in 2012.

“One of my executives was very high on Brazil,” LeFrak told Commercial Observer in an exclusive interview. “My oldest son traveled to Brazil and noticed that everyone who had money was taking it to Miami. So we said, ‘You want to invest in Brazil; we might as well invest in Miami.’ ”

LeFrak continued: “I was watching the real, live numbers and a lot of that product was being literally inhaled by investors, foreign buyers, domestic buyers. What people thought was a 10- or 15-year supply really was a two- or three-year supply. I told my sons that before the world figured out what was happening in South Florida, let’s see what we could buy.”

Properties are moving elsewhere, too!

Of course, housing is in demand in a lot of urban areas. It has been one of the reasons a real estate developer like Rick Caruso is doing so well in the race to become L.A.’s next mayor. (Although Caruso is much more associated with retail than affordable housing.)

But, yes, there is a need for more housing, and other developers are also making plans. Local Development, a multifamily builder, filed plans to construct a seven-story, 136-unit apartment building at 5101-5125 West Pico Boulevard in L.A.’s Mid-Wilshire.

And office property is trading, too. Vectra Management Group sold a mostly vacant 45,630-square-foot office building at 640 North Sepulveda Boulevard, on the Westside of Los Angeles, to the J. Paul Getty Trust (the world’s largest and wealthiest art institution) for $32.5 million.

In Northern Virginia, Amazon picked up a 12-acre site called PenPlace as part of the second phase of its HQ2 from JBG Smith for $198 million. (This will add 3.2 million square feet of office space and more than 100,000 square feet of retail to the project.)

And, yes, New York is seeing trades. SL Green Realty sold the office portion of 609 Fifth Avenue to an undisclosed “domestic investor” for $101 million. (SL Green sold the retail portion to Reuben Brothers in 2020 for $168 million.)

Keep calm and lease on!

Whether or not tenants are returning to the office, the leases keep coming.

One of the darlings of the proptech sector has been Latch, the smart-lock company that secured a $1.5 billion valuation last year after going public through a special purpose acquisition company, or SPAC.

But SPACs seem to be falling into disrepute. Last week The New York Times reported that the vehicle has been losing much of its luster in the eyes of many investors. That includes when it comes to SPAC-backed proptech companies such as Latch.

“The overall market is more volatile than it’s been for some time and companies overall are more cautious,” said Casey Berman of Camber Creek, which was an early investor in Latch. “Whether it’s SPACs, taking a company public or raising money through private financing, generally, companies are being more cautious and prioritizing cash. There’s uncertainty around how long this volatility will last, so people are choosing the more prudent option.”