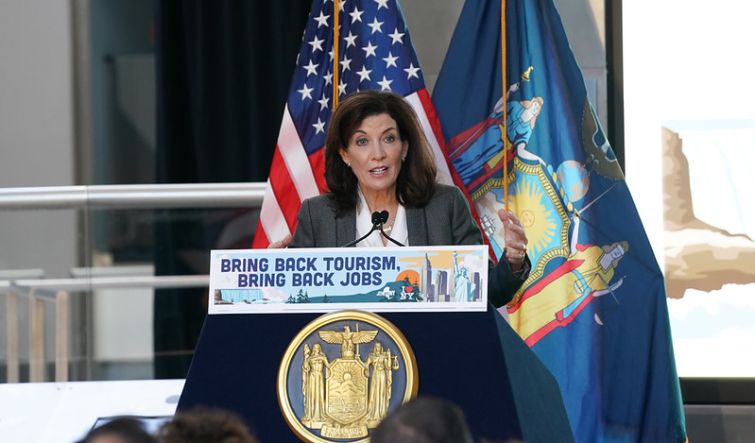 The bill lets hotels keep their certificates of occupancy when switching to residential use instead of acquiring new ones and expempts hotel conversion projects from undergoing a lengthy review process, addressing concerns from developers who blamed heavy regulations for the low number of applicants applying for state financing. Hochul said the legislation was crucial given the low supply of housing in the city’s red-hot rental market.

Mayor Eric Adams has pressed lawmakers to pass the legislation to address New York City’s limited affordable housing stock and grow the number of supportive housing beds for the city’s homeless population. The new rule, which applies to Class B hotels inside or within 400 feet of residentially zoned districts, makes it easier for developers to access $200 million in funding the state allocated to the Housing Our Neighbors with Dignity Act (HONDA), which first outlined a mechanism for state-financed hotel conversions when it was signed into law last year.

However, not a drop of the first $100 million in financing the state allocated in 2021 for hotel conversions has been used and New York State Homes & Community Renewal (HCR) — one of the agencies a developer could approach about the program — has received just two proposals for projects within New York City and one outside the five boroughs, an HCR spokesperson said.

“I’ve directly spoken to interested parties who are among the people that opined that they couldn’t get these projects off of the ground because they needed these changes made,” Gianaris said. “I think we’re going to see an increase in interest.”

Projects converting distressed hotels and office buildings into affordable housing will be owned and managed by nonprofits, according to HCR. HONDA requires half the units to be set aside for people experiencing homelessness while the other half will be subject to an 80 percent area median income cap for tenants. Rents can not exceed 30 percent of a tenant’s income, according to the bill’s text.

Hotel unions — whose industry was decimated when the coronavirus pandemic began — became an unlikely supporter of removing the obstacles for HONDA financing and the bill itself since it containts a provision to protected unionized hotel workers from lay-off after a building is converted, according to a spokesperson for the New York Hotel Trades Council, a union representing nearly 40,000 hospitality and gaming employees. Union leadership must certify that the union has agreed to a conversion before it can occur, according to the bill.

“Thanks to Governor Hochul, the state legislature, and the leadership of Mayor Adams we now have a smart, thoughtful program that can protect quality hotels that are key to the recovery of our tourism industry while converting failing hotel properties — that pay poverty wages and are a blight on neighborhoods — into much needed housing stock,” Rich Maroko, president of the council, said in a statement.

The HPD may face further delays in administering the program, even without a ULURP process, thanks to the agency’s staffing shortage of about 400 people, which has slowed the leasing of affordable housing units and supportive housing, Commercial Observer reported.

“I know that Mayor Adams has prioritized conversions and so hopefully he will make sure that the agencies move quickly,” Gianaris said. “The faster we move the better … This is a very effective way to get people back on their feet, get them into homes, give them the supportive services they need as opposed to just clearing up [homeless] encampments and dumping them into shelters — which everyone can agree in some cases are worse than being on the streets themselves.”

Adams — a strong proponent of converting hotels into housing — has removed homeless encampments from public spaces, forcing unhoused people to relocate or accept a spot in the city’s shelter system, with limited success. The mayor has also added $171 million into the city’s shelter system budget to address the limitted number of housing options for those experiencing homelessness.

A rents across New York City climb to their highest levels ever, affordable housing is essential to preventing homelessness, Gianaris said. The median rent in Manhattan reached a record high of $4,000 and $3,200 in Brooklyn in May, according to a report from Douglas Elliman. About 15 percent of renters reported an increase of between 20 and 50 percent in their rent, according to a survey of 1,500 residents from openigloo, a landlord review and apartment listing site.

The average increase across New York City was 7 percent, with Willimasburg, Brooklyn and several neighborhoods in Manhattan experiencing the most with jumps of more than 50 percent, according to the survey.