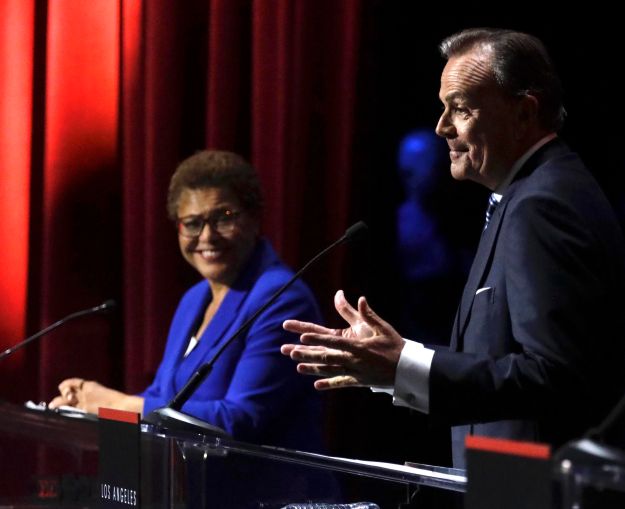 Prominent retail developer Rick Caruso and Congresswoman Karen Bass are set for a runoff in the November general election in the race to be the next mayor of Los Angeles.

Caruso held a lead with 42 percent of the votes over Bass’ 37 percent, according to the L.A. County Registrar-Recorder/County Clerk’s office. City Councilman Kevin de León, a former state senator, was in a too-distant third with 7.5 percent of the vote in a nine-person race to replace Mayor Eric Garcetti, who is term-limited.

Most of the election has been focused on crime, public safety, the rising rate of homelessness and a lack of affordable housing. In a poll by UC Berkeley Institute of Governmental Studies, potential state voters said those topics were their top concerns. And the top candidates for mayor in L.A. responded in kind: Those issues make up three-fifths of the policy initiatives laid out in Bass’ campaign, and Tuesday night Caruso told an audience of supporters that he sees a “more compassionate Los Angeles, where we move tens of thousands of people off the streets and into housing and treatment.”

Bass was a community leader and organizer in L.A. before being elected to California’s state Legislature in 2004, becoming speaker of the California Assembly in 2008. In 2010, she was elected to the U.S. House of Representatives, where she has remained for more than 11 years. In 2020, Bass was on the short list to be President Joe Biden’s running mate.

The billionaire “Walt Disney of retail,” Caruso is founder and CEO of the Caruso development firm and one of the most powerful figures in the city after developing 10 retail centers, including the iconic 575,000-square-foot shopping center called The Grove, as well as other developments that are among the 15 largest shopping centers in the country in sales per square foot.

As of June 1, Caruso had spent a record $40 million of his own money on his campaign, according to media reports, making the 2022 mayor’s race the most expensive in city history.