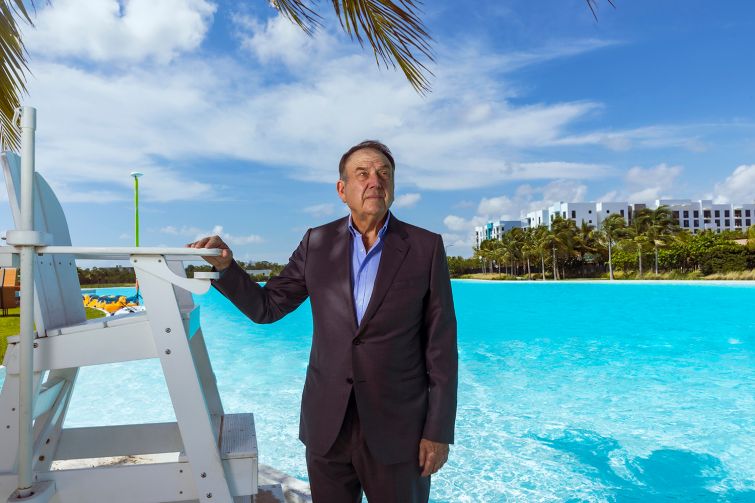 MIAMI, FL - MAY 25, 2022: Richard LeFrak poses for a photograph at Sole Mia in Miami, on May 25, 2022. PHOTO: Saul Martinez/for Commercial Observer chavagourarie

Richard LeFrak could well be considered the elder statesman of New York’s real estate scene — the scion of a rental empire, the LeFrak Organization, which built and owns tens of millions of square feet there and across the country as well as being a longtime friend of former President Donald Trump.

Richard LeFrak’s grandfather, Harry, founded the eponymous company in the early nineteen hundreds. Over the last century, it built a sprawling rental portfolio in New York. Some developments are so large they’re considered cities unto themselves. A prime example is Lefrak City in Queens, a 40-acre complex consisting of 4,605 rent-stabilized apartments.

Richard took the reins in 2003, becoming chairman and CEO after the death of his father, Samuel. Under Richard’s leadership, the company has remained a heavyweight, building massive developments such as Jersey City Newport along the Hudson River.

The organization expanded to South Florida not long after the 2008 market crash, when many thought it was a risky bet. Taking its New York formula south, the firm bought a 183-acre site that housed a former landfill in North Miami with plans to transform it into a residential-heavy, mixed-use development. It brought on another real estate dynasty for the project, the Soffers, who developed and own much of Aventura, including the famed mall. Jackie Soffer, daughter of developer Donald Soffer, now runs the company, Turnberry Associates.

LeFrak also struck it big in the hotel business, working with Barry Sternlicht’s Starwood Capital Group to develop the first 1 Hotel in Miami Beach, which sold for $610 million in 2019. Today, the deal is still one of the region’s priciest hotel trades.

The real estate veteran sat down with Commercial Observer in May to discuss his South Florida excursion, which paid off, and the state of New York’s markets. (The interview was edited for length and clarity.)

Commercial Observer: You began developing in South Florida in 2012, not long after the crash when lenders were still wary of the region. What potential did you see in South Florida?

Richard LeFrak: There were a couple of things that happened. One of my executives was very high on Brazil. My oldest son traveled to Brazil and noticed that everyone who had money was taking it to Miami. So we said, “You want to invest in Brazil; we might as well invest in Miami.”

We participated in the asset purchase of a failed bank, Corus Bank. That bank’s portfolio was about 2,000 empty condominiums in Miami, from Sunny Isles all the way down to South Beach. We got an up-close look at the market.

I was watching the real, live numbers and a lot of that product was being literally inhaled by investors, foreign buyers, domestic buyers. What people thought was a 10- or 15-year supply really was a two- or three-year supply. I told my sons that before the world figured out what was happening in South Florida, let’s see what we could buy.

One of those acquisitions was the site of the first 1 Hotel with Starwood. But people said it was a risky move. Why did you move forward with the project?

I got to know Barry in conjunction with the Corus transaction. He’s a super-creative guy. And he had a vision. He said, “I want to build the 1.” “What’s that?” I asked. He said, “It’s green, sustainable luxury. I’ve had something like this in my mind for quite a while.” “OK. … Is there a brand book?”

Whenever they do hotels, there’s always a brand book. But he just pointed to his head. I had a lot of respect for his creativity and so we embarked. Of course, you misjudged the cost — it was much more than you thought. You misjudged the market — it was more robust. One balanced the other in the end.

So the answer was yes. I think we were pleasantly surprised by the market reception as we came into the market at the same time as Edition and Faena [other luxury oceanfront hotels in Miami Beach.]

You spent about $300 million repositioning the property?

Four hundred million — that was a nice round number.

Do you see a bubble forming in South Florida’s condo market?

No. There are far fewer cranes. There’s construction, but the product is very limited. I don’t see the big inventory of unsold units.

Condo developers are now much more cautious about giving someone the green light. The financing of the condos is basically getting done, somewhat, by down payments.

But, why aren’t you developing the condo at Solé Mia?

You’re talking to a resident of New York state. As a tax matter, if I succeed, the money goes to the government. If I fail, it’s all on me. So it doesn’t make much sense. And that’s not really our primary business. I’m happy building rental apartments. It’s always been our stock-in-trade.

Why did you team up with Jackie Soffer on the North Miami project?

It was started by me in 2012. I went through an extensive period of negotiation with the regulatory authorities. This is a massive project. We’re talking about something like $3, $4 or $5 billion worth of development. So, we had to set the table properly and we did.

If we were going to implement this thing, then I need a real organization. I didn’t have an office in South Florida. And so the Soffers came along to actually buy in. We worked out a transaction where we would go 50-50. And I would have access to their staff, basically — construction, marketing, regulatory and public affairs.

Both you and Jackie Soffer are heirs to real estate empires. Was that factor in the decision to join forces?

This project is basically five minutes away from Aventura. They’re local hometown heroes. They knew the market. Not necessarily Jackie, but the firm had the experience of doing one of these developments, which is slightly different than doing a one-off. Not everybody has the stomach for that. In the beginning, it just eats money.

As a matter of chronology, Jackie is about the same age as my kids. She’s from a younger generation. She’s a delightful person.

Speaking of your children, what’s succession looking like at LeFrak?

Right now, I’m more of a coach than a player. I have two talented sons. They’re not kids — they’re 48 and 50. One is more into development and implementation. He’s an MIT engineer by training. The other deals more with the finances. They have complementary skills.

Do you have any plans to retire?

No. Day to day, my sons run the show. I help them when they have problems. If there’s a big idea, then I get more involved.

About New York, do you think it’s possible to develop another LeFrak City?

The closest we got is in Jersey City with Newport, which was most of my career. We’ve just finished the 37th building on the project. But, in New York, it’s very tough to build.

Do you think that there will be a replacement for 421a, a controversial subsidy that many developers have used to build housing in New York?

I don’t like making political prognostications. The mayor has come out in support of some version of it. It seems to be controversial in the legislature.

He’s a friend of mine. It’s a personal relationship, but I don’t want to get into it.

Fair enough. South Florida, like New York, is one of the least affordable places to live. What steps should governments take? Is rent-stabilization — how LeFrak City is priced — the answer?

The way you deal with demand is by creating more supply. South Florida had a big outburst of rent prices, but some of it will level off. The reason is COVID. I don’t see an explosion of population that has happened in the last four months continuing. Some will stay and some will go.

I think the jury is still out on remote work. The pandemic may be slightly less frightening, and certain offices are reopening. Especially younger people want and need the office environment to learn and have mentoring.

My observation about affordability is that it’s a sensitive subject. There was an article in the Wall Street Journal – somebody was living in a condo on Brickell and paying $3,500 a month. Now, numbers are $6,000 or $7,000, and they’re not happy about it. I’m happy to rent them an apartment at Solé Mia for $3,500 a month.

I’m not here to not be sensitive to it, but it’s still a lot less expensive living in Florida than it is in New York.