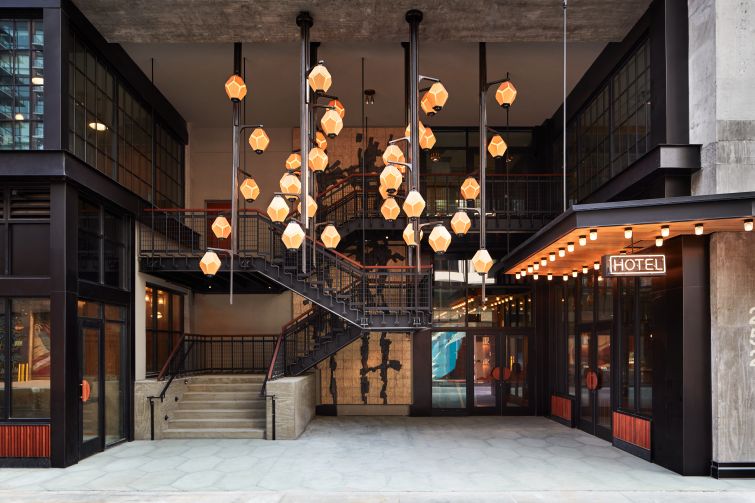 In 1999, the Ace Hotel was a former flophouse in the Belltown area of Seattle that the late Alex Calderwood and two friends saw possibilities in. Twenty-two years later, it is a global, creative, hipster, culinary hospitality phenomenon with outposts in Palm Springs, Downtown L.A., London, Nomad … and Downtown Brooklyn!

Commercial Observer got a sneak peek at the 13-story, 287-room hotel designed by Stonehill Taylor with a cast concrete facade, Roman and Williams interiors, and (of course) a ground-floor restaurant and bar.

It was an interesting week for hospitality. Those who were hoping that Brooklyn’s great hospitality icon, the Grand Prospect Hall (“We make your dreams come true!”) would be spared the wrecking ball were sadly disappointed by a Landmarks Preservation Commission decision.

But, hospitality had some good news, too. The Times Square Alliance told CO that an average of 211,000 people have been going through Times Square every day so far this year, which is more than double last year’s anemic 102,000 numbers. This is still (as one might guess) below what peak numbers were in 2019 (when pedestrian counts were at 380,000 per day), but progress is being made!

Of course, hospitality is not just a New York concern. Miami Beach’s iconic Art Deco, 42-room Hotel Astor, which was built in 1936 and shut down last year, was picked up by the New Jersey-based Victory Investments Group for $12.75 million, with plans for a revamp of the property.

Plus, this week we learned that Steve Witkoff and PPG recapitalized the Diplomat Golf Club and Residences (which, in addition to an 18-hole course, also has a 60-key hotel) in Hallandale, Fla., to the tune of $55 million.

Some properties went the other way. In Washington, D.C., the Fairfax at Embassy Row was acquired by a joint venture between Maplewood Senior Living and Omega Healthcare Investors with plans to convert the property into a 174-unit senior living facility called Inspīr Embassy Row.

It was a big week for hirings and promotions, too. Hines announced it had named Sarah Hawkins CEO of the company’s East region.

“I’ve been transitioning into this role for three years now,” Hawkins told CO. “We’ve had two other CEOs in the East region over our 40-year history, so we take transitions very seriously and we try to do them the right way. It’s something that’s happened very organically and naturally, and a lot of what I’ll be doing is actually a continuation of what I’ve been putting in place over the last three years.”

It can’t be denied, they like her! We’re talking about real estate pros and New York Gov. Kathy Hochul, of course.

It’s been less than four weeks, but Gov. Hochul has mostly gotten off on the right foot, as far as a lot of real estate pros are concerned. Many were not wild about her signing an extension of the eviction moratorium (“Ugh!” John Catsimatidis texted our correspondent), but she has also vowed to get $2.7 billion in federal funds out the door for rent relief. (​​“She knows that she’s got to get that done,” said a hopeful Jeff Gural, chairman of property owner and manager GFP Real Estate.) Likewise, she refused to dilly-dally in adding names to the Cannabis Control Board and signed legislation guaranteeing prevailing wages for building service employees.

A plurality of New Yorkers like Gov. Hochul, too. Forty-two percent told a Siena College poll that they approve of her, with only 17 percent saying that they disapproved. It’s true, 41 percent said they had no opinion, but that means that there’s quite a bit of room for her approval number to grow.

There’s a lot more that Hochul will have to contend with in the near future. New York City Councilman Stephen Levin introduced a bill, for instance, for commercial rent control. Every real estate pro’s favorite topic! We’ll see how Hochul and the next mayor handle this.

Politically, this week contained what could have been a major bombshell, the recall attempt of Gov. Gavin Newsom, but that turned out to be a major dud. It was always a stretch that California would kick a Democrat out of office and possibly replace him with, say, a right-wing talk radio host, but California is known for its unorthodox ways.

Still, another big election is coming up: mayor of New York. And the likely winner, Eric Adams, said something this week that was no doubt music to real estate professionals ears. Adams has an interesting history of interacting with the industry during his days as Brooklyn borough president. What does it tell us about how he’d act as mayor? This is the question CO asked in this week’s Brooklyn issue.

Brooklyn real estate is actually faring much better during COVID-19 than many people expected. Kings County lost fewer people than Manhattan, rents on office and retail declined by a lower percentage, and rents are even ticking up in Downtown Brooklyn.

Maybe this is one of the reasons why Atlas Capital Group decided to shell out more than half a billion dollars this week to buy All Year’s troubled Denizen Bushwick project, the 911-unit complex in Bushwick.

Denizen wasn’t the only big deal last week. There were leases all over the country! Apollo is thinking about taking 23,000 square feet at 701 Brickell in Miami. Newsmax doubled its footprint at 805 Third Avenue in Manhattan. (Apparently, Third Avenue is hot. The glass manufacturer, Verescence, also took space at 630 Third Avenue.) And videogame developer, Riot Games, subleased 131,000 square feet in a Santa Monica office complex owned by Starwood.

There were sales, too. Oxford shelled out $134 million for Santa Clarita’s Southern California Innovation Park.

And plans were filed for a half-million-square-foot creative space in Los Angeles called The Star in the heart of Hollywood. (Price tag: $500 million.)

And there was also the big walkaway. Even though the terms “multibillion-dollar deal” and “walkaway” have never been used in a sentence that also contained the word “Blackstone”, the real estate behemoth apparently said, “Thanks, but no thanks,” on a deal to buy Chinese real estate firm Soho China for $3.3 billion.