Tourists Returning to Times Square, But Far Less Than Before Pandemic 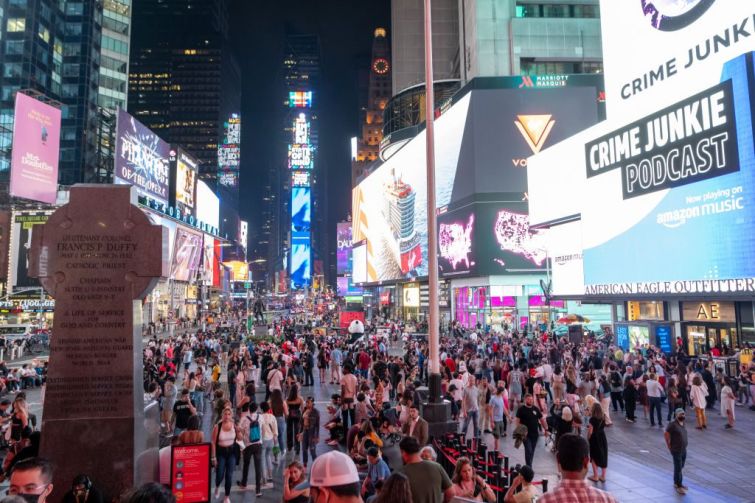 Broadway reopened on Sept. 14, but Time Square still has a long ways to go before its teeming with tourists. Photo: Alexi Rosenfeld/Getty Images

Broadway turned its lights back on this week, but the city has a long way to go before Times Square and other attractions are teeming with tourists.

So far, an average of 211,000 people traipsed through the Crossroads of the World this year, more than double last year’s average total of 102,000 per day, according to a pedestrian count by the Times Square Alliance business improvement district. And, as many as 255,000 visitors wandered through Times Square over Labor Day weekend, with the highest number of people since the pandemic began — 263,902 — entering on Sunday.

“It’s exciting times,” Harris said. “I was out last night and went to all of the shows that were open, and there was a festive mood in front of theaters. You could feel the excitement in the air.”

Whether that momentum continues through the holiday season is harder to predict. The number of visitors to the heart of Midtown has increased 41 percent since May, when an average of 148,000 came through. New hotels are under construction, too, including TSX Broadway at 1568 Broadway, the Riu Hotel at 145 West 47th Street, a future Marriott on 46th street, and a Hard Rock Hotel opening on 48th Street in 2022.

But, foot traffic in the area is still 44 percent below 2019 levels, when pedestrian counts averaged 380,000 per day, the Times Square Alliance said. And the city’s tourism arm, NYC & Company, forecasted in April that New York would receive 36.4 million visitors by year’s end, slightly more than half of the 66.6 million tourists who traveled into town in 2019.

Hotel occupancy has also been slow to rebound since bottoming out last spring, when nonessential businesses shuttered and international travel ceased. Now, hotels in Times Square are about 55 to 65 percent full in recent weeks, Times Square Alliance said.

That will change as large-scale events that draw national and international guests return to the city more frequently. In the past three weeks, the city hosted multiple days of Fashion Week festivities, the Met Gala, the Armory Show, several art fairs, and the U.S. Open.

This month, the United Nations is returning in person to Midtown for the first time in two years, but is limiting the number of delegates per country. Hotel leaders are hopeful there will still be 3,000 to 4,000 guests during the plenary week, but are worried about the future.

“It is a ‘one-off’ event like the U.S. tennis open that just finished, and we are more concerned at airline trends which were headed upwards but have pulled back due to the delta variant. Hopefully, it is transitory,” said Vijay Dandapani, president and CEO of the Hotel Association of New York City. “The mood will change decidedly to the optimistic side if international travel is lifted.”

Restaurants and bars face additional challenges. Broadway’s reopening has been a boost to Midtown cafes and pubs, but several stalwarts, such as O’Lunney’s, closed because their rent burden became unaffordable during the city’s extended COVID lockdowns.

“It’s important to stay optimistic, but also realistic, since the only thing that’s been certain throughout the pandemic is that everything is uncertain,” said Andrew Rigie, executive director of the New York City Hospitality Alliance. “Broadway opening is a boost, and we need more symbols and reasons for people to go out safely.”

Many Manhattan companies have pushed back their return-to-work dates until 2022, due to the rise in COVID infections from the delta variant, but special events in Times Square are continuing unabated. The Macy’s Thanksgiving Day Parade is returning to Midtown with a live audience along its full-length route this November, city officials announced this week. And Times Square is welcoming hundreds of thousands of revelers for its annual New Year’s Eve ball drop, unlike last year’s more limited audience.