Eric Adams Promises ‘New York Will No Longer Be Anti-Business’ 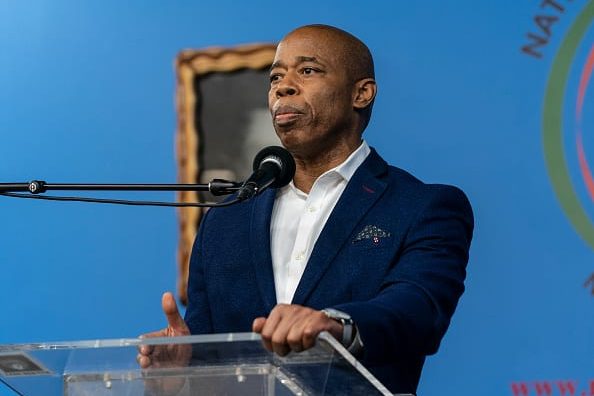 Eric Adams expects New York to be more business-friendly if he becomes mayor in January, in a stark contrast from the current mayor who campaigned on narrowing the income inequality gap.

The Democratic mayoral nominee told Wall Street insiders he would welcome the input of corporate leaders and promised to improve the city’s quality of life if voters elect him in November.

“New York will no longer be anti-business,” Adams said to a roomful of hedge fund managers and financial tycoons on Tuesday. “This is going to be a place where we welcome business and not turn into the dysfunctional city that we have been for so many years.”

In his remarks, Adams outlined his vision for moving the city forward as it recovers from a pandemic that killed 34,000 New York City residents and put a million of them out of work last spring.

“Government must do its job to create an environment for growth,” Adams said. “That means lower crime. We have to curb COVID, fewer homeless on our streets, greater affordability, and partnership with the business community.”

Scaramucci told the crowd he would be voting and raising money for Adams and tweeted a photo from the conference with the caption, “New York is back baby.”

Adams ran his campaign as a business-friendly alternative to Mayor Bill de Blasio — who often shunned hobnobbing with the city’s executive class — and progressive candidates seeking the Democratic nomination. Adams made public safety the centerpiece of his candidacy, which is what business leaders demanded de Blasio address — crime, panhandling, and sanitation issues — in an open letter one year ago.

“Obviously we’re thrilled,” said Kathy Wylde, president and CEO of Partnership for New York City, the city’s leading business organization, who helped draft the letter. “New York is the commercial capital of America, and it’s only appropriate we have a mayor who recognizes that and supports the New York business community.”

Adams has also benefited from this embrace, raising $7.3 million in private funds for his campaign, while taking in another $10 million in public funds so far. This past summer, he has raced between the Hamptons, Martha’s Vineyard, Downtown Brooklyn, and tony corners of Manhattan with a goal of hauling in $5 million by November for a general election battle with Republican Curtis Sliwa.

But most business leaders have anointed Adams as the mayor-in-waiting. Former Mayor Michael Bloomberg endorsed him last week. He’s dined repeatedly with John Catsimatidis, the Republican power broker and CEO of the Red Apple Group, and he been a guest of venture capitalist Lisa Blau, the spouse of Related Companies CEO Jeff Blau.

Most leaders are eager to hear the likely future mayor’s plans for curbing COVID as remote work for many in the private sector has continued past Labor Day.

Adams promised to create community health centers in underserved neighborhoods and improve access to vaccines. But the city’s third wave of coronavirus appears to have reached a plateau as school reopened this week, creating fears that the virus could surge as it did last fall.

“So far, we’re doing better than other cities, but there’s concern that this cooler weather could come in and we’ll see a ramp-up of new strains of COVID-19,” Wylde said. “People want to feel safe, and until they do, we’re not going to get back to normal.”