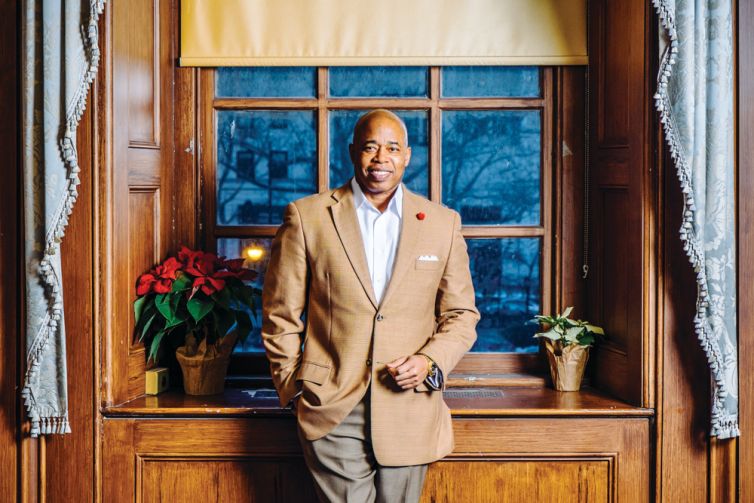 Two weeks before the June primary, Eric Adams let a gaggle of reporters root around the inside of his three-story, Bedford-Stuyvesant brownstone.

The Brooklyn borough president had emerged as the Democratic frontrunner for mayor, thanks to a near-singular focus on crime and quality-of-life issues, but an explosive story in Politico questioned whether he lived in Brooklyn at all, and suggested he split his time between staying overnight in his cramped Borough Hall office and his partner’s co-op in Fort Lee, N.J.

The following day, Adams and campaign aides set about to prove that he did live in the Lafayette Avenue row house he owned by leading a tour of his basement unit.

The bizarre scene played out on the local news like a reboot of MTV’s “Cribs” featuring a middle-class, retired cop’s home instead of those of Hulk Hogan or 50 Cent.

Adams patiently answered questions about the contents of his fridge and about his neighbors as reporters snapped photos of a chaise lounge sofa and a line of sneakers, and while people on social media speculated if his son actually lived in the space.

Photos of Adams leading the press through the humble basement unit may have been the defining images of the primary. The episode didn’t hurt his eventual win a month later, when he edged out former Sanitation Commissioner Kathryn Garcia in the final round of ranked-choice voting.

“Nobody is going to out-cop the cop,” said Lupe Todd-Medina, president of Effective Media Strategies and a Brooklyn political consultant who worked with one of Adams’ opponents. “Even before crime became the issue of the campaign, it was always number two or three. The rest of us on the campaign trail were talking about other ways to open the city and get businesses open, and he was still talking about crime.”

Adams’ eight-year legacy as Brooklyn borough president has been harder to pin down. The Brownsville native served in the New York City Police Department for 22 years before becoming a state senator representing neighborhoods not far from those he once patrolled.

His borough president predecessor, Marty Markowitz, was a relentless booster, who embraced nostalgia for Brooklyn’s most beloved attractions while charting the borough’s future growth. He pushed for more amusements in the Bloomberg administration’s controversial Coney Island rezoning and secured an amphitheater on the waterfront before he left office. And the void Markowitz felt when the Dodgers left Brooklyn for Los Angeles 50 years before drove him to court a professional sports franchise while pushing for the development of Atlantic Yards into a sports and entertainment complex.

Markowitz’s political career ended after a dozen years in Borough Hall, while Adams is on the cusp of a citywide promotion. His style has been more subdued, resembling a conscientious student body president to Markowitz’s hammy class clown, but Adams used his bully pulpit in similar ways, often attending four or five events a night and promoting a vegan lifestyle.

“Marty was more of a cheerleader, and Eric is more into policy and affecting change,” said George Arzt, a Democratic political consultant who advises the Brooklyn Democratic Party. “Eric has always been quiet about his accomplishments in key areas in getting things done.”

Development and neighborhood rezonings — one of the few areas within a borough president’s purview — continued at a brisk pace on Adams’ watch. But he took more of an ad hoc approach to proposals compared with Markowitz’s carte blanche approvals.

“His questions are, ‘How will these projects help the underserved residents of the borough?’ said David Lombino, Brooklyn-based Two Trees Management’s external affairs director and a supporter of, and donor to, Adams. “They want to maximize affordable housing. They’re aware it makes a lot of sense to do density in high-opportunity neighborhoods, and there’s more skepticism for market-rate development in actively gentrifying neighborhoods.”

Adams doesn’t have a signature project that he can claim to have supported like the Barclays Center. Instead, he has backed the development of several sites scattered throughout the borough, while shooting down politically unpalatable ones.

In July, Adams opposed an 18-story residential tower at 840 Atlantic Avenue where a McDonald’s drive-thru is located, agreeing with local community board members and New York City Council Member Laurie Cumbo, who criticized the project’s height and density. The following month, Adams rejected two 39-story towers on Franklin Avenue, siding with neighborhood activists and Community Board 9 members, who argued the project would have blocked sunlight to the Brooklyn Botanic Garden.

Even when he favors a project, Adams issues caveats. For two nine-story towers that Camber Property Group hoped to build in Bushwick, Adams demanded broader levels of affordability and more tenant protections.

“He had an eye toward ensuring that residents who already live there were able to participate in the development of their communities,” Todd-Medina said. “We didn’t see that before under Marty.”

He refused to back the city’s initial plan to upzone swaths of East New York unless affordable units were made permanent, more construction for low-income housing occurred, and more anti-displacement measures were added. Adams announced his support for the Gowanus rezoning only when the city agreed to spend $274 million to repair two public housing complexes in the area.

In other instances, Adams deferred to local officials who fought with the city over controversial rezoning proposals. He stayed out of a five-year fight between North Brooklyn community activists and the de Blasio administration over their dueling plans to rezone 300 blocks in Bushwick.

He gave his blessing to Industry City’s proposal to expand its waterfront footprint in March 2020, but did little to champion the plan publicly as Sunset Park Council Member Carlos Menchaca, Congresswoman Nydia Velazquez, and a slew of progressive advocates fought the rezoning. Developers privately grumbled over the slight, sources told Commercial Observer, although Council Speaker Corey Johnson and Mayor de Blasio wouldn’t cross Menchaca either.

Adams still has four months to continue making his mark in Brooklyn. He is expected to weigh in on Two Trees’ River Ring project on the edge of the Williamsburg waterfront.

The Gowanus rezoning plan could transform South Brooklyn for decades. And he may even get to revisit the Atlantic Avenue site after its developer revised its proposal this month.

After eight years, Adams will leave the borough having won widespread support among multiple communities that are hard to please.

“Eric Adams is a thoughtful leader, and has shown a rare talent to truly always lead from the heart, and has the best interest of all of his constituencies at heart,” said Ofer Cohen, founder and president of TerraCRG, a commercial real estate firm in Brooklyn, and an Adams mayoral campaign fundraiser. “He had prioritized and fought for the most burning issues Brooklyn had faced during his tenure, and I know he will continue to do so as a mayor.”