Project plans include a funicular up to a rooftop dome 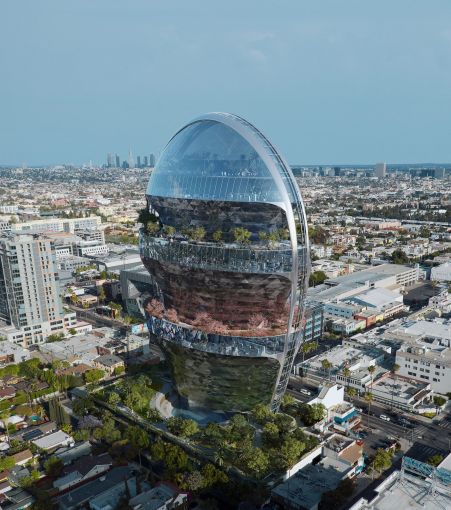 Developers on Thursday filed plans for a $500 million creative office campus with a one-of-a-kind design, rising 22 stories on Sunset Boulevard in the heart of Hollywood.

The project, called The Star, would replace small office buildings at 6061 Sunset Boulevard with approximately 500,000 square feet. It would be across the street from Sunset Gower Studios, and about a block from the Hollywood Palladium and the planned Palladium Residences tower project.

The developer, The Star LLC, acquired the property for $64.1 million in 2017 through the entity managed by Yi Chang Gong, property records show.

The proposed glass egg building that looks like a spaceship would surely stick out in Hollywood. MAD Architects, which is behind the Lucas Museum of Narrative Art, is designing it with sky gardens and a funicular cable rail from the green roof at the building’s base up to a terrarium-like rooftop dome with a restaurant and event space.

Edgar Khalatian, representative for the developer, said the project will give a new opportunity for “a major company to make a bold statement and proudly plant their flag.”

The office market in Hollywood is suffering after the pandemic, with about 30 percent of the total space available for lease or sublease, according to Savills’ second-quarter report. But office rental rates in Hollywood are toward the top regionally at about $4.82 per square foot.

Across the street, Hudson Pacific Properties is expanding Sunset Gower Studios to include 828,339 square feet of creative office space, 205,202 square feet of soundstages, and 65,319 square feet of production support. It’s part of the portfolio shared with Blackstone with almost 1 million square feet across five office properties: 6040 Sunset, ICON, CUE, EPIC and Harlow, all in Hollywood.