How Jeff Gural Learned to Love Shorter Leases and More 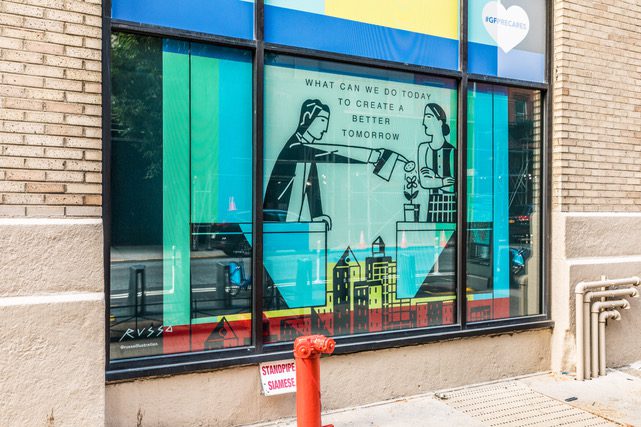 One of the Anthony Russo murals, at 200 Varick Street. Photo: Julien Capmeil

Jeff Gural has been involved in commercial real estate ownership and development in New York City for a half-century. So, he’s seen some crises, including the city’s submersion into the socioeconomic malaise of the 1970s.

Now, as chairman of GFP Real Estate, which controls some 12.8 million square feet, primarily in Manhattan, he is working his and his company’s way through the coronavirus pandemic. That includes incentivizing employees and building workers to get vaccinated and providing wiggle room for tenants walloped financially by COVID.

Gural talked to Commercial Observer during the last full week of August, as the delta variant continued to surge and Kathy Hochul became New York’s governor as Andrew Cuomo exited. The developer and owner says he’s learned some things during the pandemic, particularly when it comes to lease lengths.

He also warned about what might derail New York’s recovery — one that his company has sought to promote through five murals at 10 Astor Place, 200 Varick Street and 80 Eighth Avenue, among other GFP addresses. Noted illustrator Anthony Russo is behind the murals, which include such phrases as “We rise by lifting others” and “Be kind, it powers the world.”

Tell me about the Anthony Russo murals.

That’s how you get through something like a pandemic. Our view of the world was that the right thing to do, to work with our tenants and help them get through this.

How many of your tenants are back?

Only about 25 percent. But I’ve been very busy leasing space, so I think that a lot of the tech tenants that I’ve been working with, they’re young companies, and they can’t work from home because they don’t even know each other. I think I have 10 leases out for signature.

So, I think people are renting space, even though we all thought that after Labor Day we’d see a huge return — that’s not likely to happen. On the other hand, hopefully, the fact that this Pfizer vaccine now has full approval, maybe that will encourage people to get vaccinated. I mean, New York is doing OK.

Can you talk about the tech tenants you’ve signed or are in negotiations with?

I can give you a list of tenants that I’ve leased space to. [A rep for Gural later emailed a list that included 11 leases executed or pending in 2021, with tech clients in Manhattan addresses, such as 100 Crosby Street, 594 Broadway, 10 Astor Place; the tenants included data processor Materialize, as well as data analytics firms Denver Technologies and Curacity.]

There was an employee vaccination incentive at your company. Can you explain that?

In our corporate offices, everybody’s vaccinated. We thought this was the best way we could encourage those that were hesitant since we could not make it mandatory for our union employees.

So, I came up with the idea that we would give everybody who’s vaccinated a $500 bonus, whether they had already been vaccinated or they were going to get vaccinated. Then, to have a little fun, we put $10,000 in a kitty, and everyone who’s fully vaccinated would be able to put their hand in the fishbowl; and we’ll have one person get a $5,000 bonus, and five people will get a $1,000.

In the middle of September. We gave everybody an opportunity to get fully vaccinated.

Besides vaccinations, what can New York City, the public and private sectors be doing to spur the recovery?

Unfortunately, the rain came, but I thought the concert was a good idea. I think Broadway opening is a good sign. I think we have to hope, frankly, that this delta variant, that we’re able to keep the positivity rate at 3 percent. Some countries that have seen the rate spike with the delta variant have seen it drop, so maybe the same thing will happen with us.

Do you worry about remote —

Do I worry about remote? Yeah, I do.

Look, personally, I don’t like working remotely. I’m talking to you remotely, and I’ve been on phone calls all day. So, I find it harder.

It’s just being around people, sharing ideas — but do I think it’s going to come back to the way it was before the pandemic? I don’t think so. I think there will be more on quality of life, and I think companies will look to allow their employees to work from home. It’s hard to argue that if your company’s been successful over the last 18 months working from home that you can’t do it.

But I think it remains to be seen.

You talked about tech leasing. Are they the ones driving leasing in Manhattan, or is it still financial services?

My experience — I’ve been leasing to a lot of young companies. Like I said, they have to have offices; they don’t even know each other. That’s what I’m seeing — a lot of companies that were formed over the last 18 months, and now they need office space. They recognize that it’s important to get to know each other.

Do they look for a particular office space that’s maybe different than before?

Not really. We have locations in SoHo, in the Village, Tribeca — I think they feel more comfortable in those kinds of locations, in the older buildings. I’m talking with tenants renting 2,000, 3,000, 5,000 square feet; they’re not going to Hudson Yards to rent 100,000 square feet.

What were some of the lessons that you learned that the pandemic taught you?

I think, for us, the goal is to make shorter leases rather than longer leases. That’s what the people want.

Two, three years. Sometimes with options. These are young companies; they themselves don’t know what kind of growth they’re going to have. They don’t want to make a longtime commitment.

Anything else that you wish had been in leases before the pandemic?

Rents have come down. We still do OK. Rents were pretty high.

How does now in New York City — the real estate market, the city at large, and the economy — how does it compare to the mid-1970s or the Great Recession?

It’s completely different. Back then [the 1970s], nobody wanted to be in the city. The city was unsafe; people were leaving; major companies were moving out. That’s not the case today.

We have to get crime under control. I think Eric Adams will do a good job. He understands that.

But everyone was depressed back then. This is completely different. This is a pandemic — you’re looking at something nobody can control. If a tenant can’t pay the rent, ordinarily, you know, ‘OK, give us the keys.’ In this case, you had tenants who couldn’t pay the rent, but it wasn’t their fault. There were outside factors. You have to look at it that way.

Was insurance any help from your end?

No. What has actually helped us was the city — I give de Blasio credit — has lowered the real estate assessment on all of the buildings. That’s allowing us to cut costs a little bit.

Is anything else weighing on real estate’s recovery besides the pandemic and the trend in remote work?

I think we have to get crime under control. People can’t feel unsafe. The No. 1 goal, in my opinion, for Eric Adams and Kathy Hochul is to make the city safe again.

I think that Cuomo talked about it in his farewell speech, but didn’t mention the fact that one of the reasons the city had become less safe is the no-bail laws. I support no bail, but you’ve got to give judges discretion. If you don’t give judges discretion, you can have the situation where someone’s committing the same crime over and over again, and there’s no way to put them in jail.

Do you have an opinion on the new governor?

I know Kathy. I’ve known her for a while. I think she’ll do a great job. I think she’s a breath of fresh air. I think everyone’s glad to see Andrew leave.

Going back to where we started, with the murals, is there anything that’s in the works or that you think should be in the works as far as drawing in the arts community?

I think the arts community is going to go where rents are low.

I think the most important thing right now is to get everybody vaccinated, so the positivity rate [can get] back to under 1 percent and make people feel safe. That’s it. We accomplish those things, the city will recover.