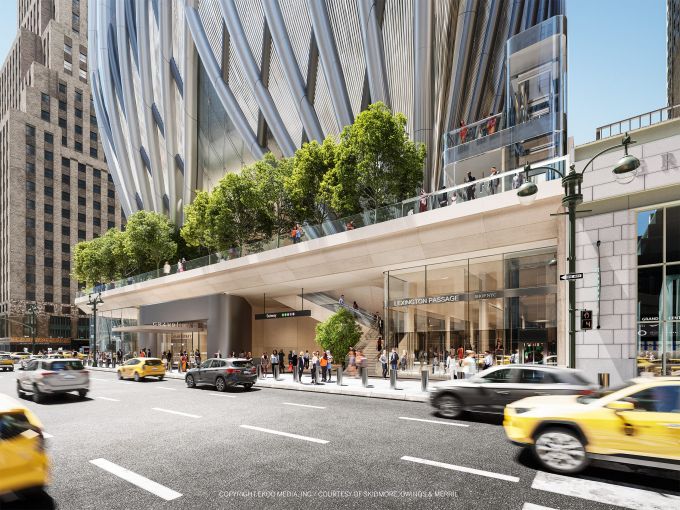 The new elevated public space will be landscaped and include two cafes. Rendering: SOM

If there was one big takeaway from 2020 regarding real estate, it was this: Rethink everything.

But, given all these rethinks, it was a palpable, unalloyed pleasure to see some of the gloried developers of the most recent boom, RXR Realty and TF Cornerstone, go big with their plans to replace the Grand Hyatt by Grand Central Station.

The bold new development will be a massive 83-story, 1,600-foot tall, 2.2 million-square-foot office-and-hotel hybrid, and will add 12,000 square feet of passageway underground to link the Long Island Rail Road with Metro North. And two of the most iconic architects in the business are taking on the job: Skidmore, Owings & Merrill and Beyer Blinder Belle. (SOM’s legendary T.J. Gottesdiener is leading the design.)

Did we discern a whiff of optimism in the air?

If you listened in on Commercial Observer’s panel discussion in late January, you’d get that impression.

That seemed (more or less) to be the sentiment among the high and mighty of real estate. “We can see the light at the end of the tunnel,” declared Chad Tredway, director and head of real estate banking at JPMorgan Chase, one of the celebration’s sponsors, who sits on REBNY’s board of governors.

A few days before that, CO hosted another panel, “Dressed for Distress,” about the distress market and the mood was … not quite as terrible as we imagined.

Those who were banking on picking up properties going into default for a song are going to be disappointed, according to some of the panelists.

“Buying cheap is not going to be successful this time,” said Empire State Realty Trust’s Aaron Ratner. “We have trillions of dollars of fiscal and monetary stimulus; half of high-yield bonds are trading below 4 percent; commercial mortgages are being issued below 3 percent. This, as a result, makes investors have to change their strategy … There’s too much global capital, with $300 billion in dry powder out there, just to buy cheap.”

None of this is to say that the market is good; but, according to panelist Rob Verrone of Iron Hound, borrowers and lenders behaved much more prudently than they did in the great credit crisis, when they fatally overexposed themselves.

And not all markets are the same.

If you were in the Southern California industrial sector, you were coming off one of the best years ever.

“The industrial market continues to be the hottest segment of the CRE world,” said Barbara Perrier, vice chairman at CBRE. “2020 was a record year with 224 million square feet of industrial product absorbed in the U.S.”

Industrial is hardly alone. The other area where there’s been no shortage of activity is life sciences, supporting all those future Pfizer and Moderna geniuses in lab coats. One firm that is making a very shrewd bet on life sciences is Nuveen, which unveiled a plan for a 400,000-square-foot Upper West Side life sciences campus last October. CO spoke to Nadir Settles, Nuveen’s head of real estate for the New York office, about life sciences and more.

Finally, the old wisdom that there is security in American real estate seems to hold up. There are still foreign investors looking to park their capital in something safe, and real estate is still the answer for many.

It was a very swift reversal for the firm, which had been looking extremely good at the beginning of 2020; back then, All Year had struck a deal for $346 million to sell off a chunk of its property and had refinanced its construction and bond debt to the tune of $675 million. And then coronavirus hit and the roof caved in. CO took a deep dive into the frayed finances of the firm and Goldman’s increasingly contentious relationship with creditors and bondholders.

While Simon Property Group has been one of the more intrepid of the big mall owners, purchasing defunct brands, and aggressively renegotiating previous purchases, they haven’t been immune to the bad market, either.

Last summer, Simon defaulted on a $200 million loan to Deutsche Bank for the Town Center at Cobb mall in Atlanta. This past week, the bank foreclosed on the mall.

Simon’s partner on the purchase of JCPenney, Brookfield, also had a not-very-great week. The REIT, which owns One Manhattan West and Brookfield Place, revealed that it lost $2 billion in the pandemic.

Can you bring us back to our happy place?

Speaking of Deutsche Bank, they’ve actually been doing pretty well this year, all things considered. They had to deal with a lot of negative publicity, due to their relationships with Donald Trump and Jeffrey Epstein (one of whom is going to remain a PR problem), but the bank still did $3.75 billion in real estate deals between March and November, COVID-19 pandemic or not, and had the fourth biggest CMBS book, behind only JPMorgan Chase, Citigroup and Goldman Sachs; and, in November, Moody’s changed Deutsche’s credit outlook from negative to stable.