Now, it’s a guessing game as to when its effects wear off — if ever 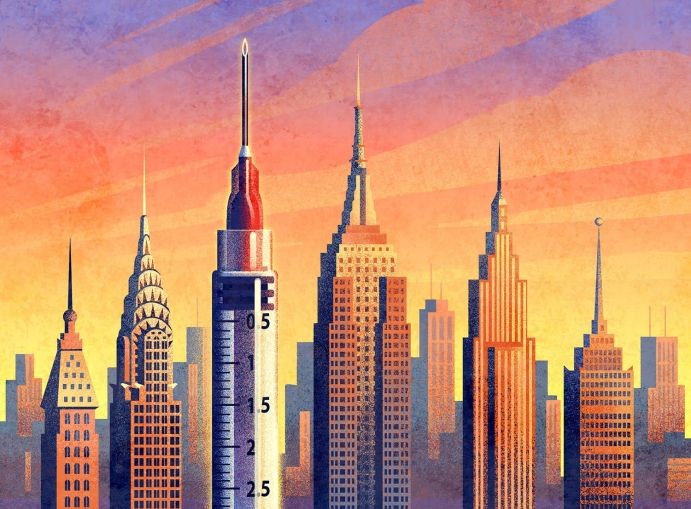 In early December, real estate investment firm Clarion Partners closed on a 70 percent purchase of a life sciences portfolio in Seattle from an affiliate of Alexandria Real Estate Equities, a prominent developer of such space. The sale price for the 322,858-square-foot, fully leased portfolio was $450 million. That was enough to make the deal the largest investment sale completed in Washington State to date in 2020, according to brokerage Newmark, which arranged the deal for Alexandria.

In the same part of the month, Silverstein Properties, a firm best-known for rebuilding much of Manhattan’s World Trade Center, and financial services giant Cantor Fitzgerald announced they were partnering on a 250,000-square-foot, eight-story lab and office building in Philadelphia with local developer University Place Associates. It’s supposed to be finished in 2022, and already has two tenants lined up.

About a week after the Seattle and Philly deals, private equity giant Blackstone Group announced that one of its offshoots had agreed to pay Brookfield Asset Management $3.45 billion for a 2.3 million-square-foot portfolio of life sciences buildings located almost entirely in Cambridge, Mass.

A little over a week before the Seattle and Philly deals, a partnership between developer Tishman Speyer and Bellco Capital, an investment firm founded by two physicians, announced it had raised more than $1 billion for its Breakthrough Properties, a venture aimed at buying and building labs globally.

This early winter crush of deals highlighted one of the best-known commercial real estate storylines of the pandemic: the continued rise of the life sciences industry.

That industry, however, was growing coming into COVID, and the pathogen has only accelerated its growth. Now, it looks like the successful sprint for a vaccine may prove a further boon. In fact, the storyline’s latest plot twist seems to be trying to divine what, if anything, can derail the industry’s growth and that growth’s effect on property markets nationwide.

Specifically, the race for COVID therapeutics and vaccines erased a lot of government bureaucracy that those in the industry and servicing it hope will never come back. A more rapid approval pace should make it less expensive to bring salable, scalable medications and technologies to market.

“The perverse silver lining of COVID is that it forced the U.S. government to realize that the [Food and Drug Administration] approval process was protracted and filled with red tape,” said Jason Kaufman, senior vice president of investments and development at Silverstein Properties.

COVID has also spurred a push for onshoring more of the supply chain for life sciences products. Companies want fewer links in other countries and more in the U.S., despite potentially higher costs, observers say. Onshoring means more business for the industry itself and for those that service it — including developers and commercial real estate investors providing additional storage for onshored supplies and more room for domestic manufacturing.

“We believe the pandemic has actually focused both public and governmental attention on the inherent value of science in a way that we really haven’t seen since the space program in the 1960s,” said Yanni Tsipis, a senior vice president at WS Development, which is building one and a half million square feet of lab space in Boston’s Seaport District. It’s due to be finished in the fourth quarter of 2022, and has a tenant already lined up for 600,000 square feet.

These trends — a greater focus on the potential, market or otherwise, of life sciences; a possibly faster federal review process; and a rise in interest in onshoring — have collided with those that were already fueling a life sciences land rush pre-COVID.

Chief among these earlier pre-existing conditions was the rapid aging of the U.S. population. An estimated 10,000 people were turning 65 every day by 2019, and 21 percent of the U.S. population is expected to be at least that old by 2030, according to census data. This growth has fueled demand for life sciences products.

Then, there were the evolutions in technology, including artificial intelligence, and in discoveries and developments in gene and cell therapies. These innovations have expanded the realm of possible products. The COVID vaccines themselves represent unprecedented usage of research into the use of messenger ribonucleic acid (mRNA) to speed an immune response in the body.

Due to growing demand and the similarly fattening ability to satisfy it, the other key trend behind life sciences’ earlier growth fell naturally into place: money.

Venture capital investment in the industry grew from $3.7 billion in 2008 to $17.4 billion in 2019, according to Cushman & Wakefield. The National Institutes of Health also granted $124 billion to the industry from 2014 to 2019, mostly to medical institutes, universities and hospitals, per the same Cushman & Wakefield research. Finally, research and development spending by the industry’s individual companies themselves increased 40 percent from 2012 to 2019.

The investment continued into the pandemic, and likely because of it. Venture capital funding for the life sciences industry for the year ended June 30 was a 12-month record $17.8 billion, according to CBRE. The same CBRE figures, released in November, forecasted National Institutes of Health funding to major universities and institutions to grow 6 percent in 2020, to $42 billion.

Unsurprisingly, the number of life sciences jobs has grown, too, and this has fueled demand for lab, research and office space. For 20 years, starting in 1990, employment in the sector grew 1 percent annually, versus 0.9 percent for job growth for the entire U.S. Since 2013, life sciences job growth has increased by about 7.5 percent a year, according to Cushman & Wakefield.

Estimates now place the number of life sciences jobs nationally at between 200,000 and 250,000, with the majority concentrated in just a handful of metros. The number of jobs appears to have peaked in March, just at the start of the pandemic, according to CBRE. There was a 1.3 percent dip from then until July, but the number was still up 1 percent from the same time in 2019. What’s more, job growth in biotech research and development, in particular, has even been outpacing growth in the almighty tech industry, CBRE research showed.

In those metro areas that host the most life sciences space and new development, the share of just how much commercial real estate is given over to the sector has grown significantly in the shadow of this funding and job growth.

Such development is unlikely to ebb significantly anytime soon, even after COVID. On top of increased demand are those twin trends of onshoring and expedited approvals. Then, there’s how good an investment life sciences real estate looks like when stacked against other asset classes.

The pandemic has famously walloped hospitality, especially hotels, and brick-and-mortar retail. Dozens of retailers have gone bankrupt, closing hundreds of stores. And numerous hotels have shuttered nationwide, with cities particularly impacted. In the New York area, nearly half of commercial mortgage-backed securities loans made against hotels were in special servicing in November, according to research firm Trepp.

“There’s a lot of capital on the sidelines looking for yield, and there are very few asset classes that offer that like life sciences,” said David Providenti, a vice chairman and a director at brokerage Savills. “Would you rather bet on office or on retail or on life sciences, in terms of where there’s room to grow, given current market conditions?”

As far as what might derail the growth, it’s hard to tell. Developers and the companies themselves, as well as the investors behind both, are understandably bullish. The sector will never overtake the likes of office or multifamily in commercial real estate in terms of share and influence. But it’s proving an enduring safe haven — therapy, if you will, for the ills of the market now.

It’s also primed to move beyond its primary clusters, such as Boston, San Francisco and San Diego, and even its secondary ones, such as New York and Austin. Emerging markets mentioned often include Philadelphia, Salt Lake City, Baltimore, Houston, and Raleigh-Durham (and its Research Triangle Park).

“Any market, really, that has good research universities and institutions can be viewed as an expansion market,” said Adam Sichol, co-founder and a managing partner at Longfellow Real Estate Partners, a leading developer of life sciences space, including the nearly 600,000-square-foot Center East campus of the New York Blood Center planned in Manhattan.

Meanwhile, the fundamentals beneath life sciences, the funding in particular, make it attractive for as far as anyone following the sector can see. A third-quarter report from the National Venture Capital Association, a trade group for VC investors, found that pandemic-spurred investment in the industry could not only continue through the COVID vaccine rollouts, but reverberate well beyond. That means more investment and more development.

“This surge in investment over the last two quarters,” the report said, “could result in a five- to 10-year boost for the industry.”