Cross-Border CRE Investments in the U.S. in 2020 and Beyond

International investors, particularly from East Asia, Canada and Europe, have continued to pour money into U.S. real estate as a diversification play amid COVID. What’s next? 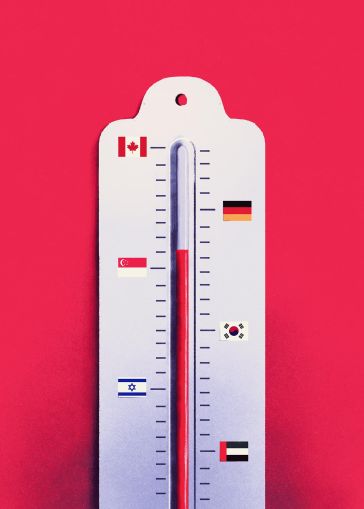 The climate that COVID-19 created made investment in U.S. commercial real estate more attractive, due to lower hedging costs, although not every overseas player was willing to dive headfirst into the muck to find and engage with opportunities.

After a dismal 2019, cross-border investment into U.S. commercial property was expected to balloon last year — and then the coronavirus caused a screeching halt. But now that many international players have stepped back and surveyed the landscape, industry observers are expecting a very busy 2021.

“On the ground, there’s a tremendous amount of pent-up demand and excitement,” as investors look forward to 2021, said Berkadia Senior Managing Director Chinmay Bhatt. “You’re seeing the vaccine rollout in the U.S. and other parts of the world, which allows us to open up and reduce some of these near-term difficulties. The excitement that was there going into 2020 has only grown.”

Cross-border investment into U.S. commercial real estate came stumbling into 2020, dropping 54 percent the year before and falling short of U.S. outbound investment into other markets for the first time in six years. It fell further in the first half of 2020 due to the pandemic, dipping 34 percent on the year, according to data from CBRE.

Now, as another round of federal stimulus nears and interest rates are expected to remain at historically low levels, inbound investment into the U.S. is poised to take a leap in 2021 — at a time when the commercial property market is looking for glimmers of hope on the investment sales front.

Lower hedging costs against the U.S. dollar on inbound investments helped spur a number of overseas investment groups to jump on opportunities stateside in 2020.

Two of the biggest beneficiaries of this were South Korean and German institutional investors.

“German open-ended funds and [South] Korean institutions are required [by law in their countries] to hedge the equity portion of their investments,” Alex Foshay, a vice chairman and division head of international capital markets at Newmark, said. “Those costs were high as of March last year. The Fed reduced rates, which brought the cost of hedging down dramatically.”

“That was the biggest single shift, which caused a dramatic ramping-up in investment out of both of those geographies, particularly out of [South] Korea,” Foshay added.

Indeed, investment from South Korean institutions jumped dramatically on the year to more than $5 billion as of December 2020, a roughly 93 percent year-on-year leap, and they haven’t slowed down in 2021.

Since 2016, China has essentially retreated from the market. While Chinese cross-border investment was far and away one of the largest sources of inbound overseas capital and the leader out of the Asia-Pacific region, its presence has evaporated, due to Chinese government mandate and capital controls.

Filling the void are South Korean institutions, pension funds and securities companies, such as Hana Financial and Mirae Asset Global Investors, as well as capital from other outlets out of Asia, such as major Singaporean real estate investment trusts (REITs) and Japanese investors.

Logistics was a hot topic for most of last year, before focus in the second half of the year began to shift to prime, core office products with credit tenancy. Investors have preferred that these assets be occupied by FAANG tech companies (Facebook, Amazon, Apple, Netflix and Google), sources told Commercial Observer.

“Overseas investment is weighted to core investments, prime assets that are leased to credit-weighted tenancies, preferably with a tech tenancy in place for a term of 10 years or longer,” Foshay said.

Hana Financial, specifically, closed 2020 with a flurry of activity. In December, it moved to acquire a 95 percent stake in the 38-story, 700,000-square-foot Qualtrics Tower — formerly called 2+U — in Downtown Seattle from Skanska in a roughly $700 million transaction. It then recapitalized the mixed-use tower with a $457.6 million loan from JPMorgan Chase, of which a nearly $298 million senior note will be offered up to commercial mortgage-backed securities (CMBS) investors.

Weeks later, in early January, Hana dove into one of the country’s more high-profile secondary markets, when it closed on a $201 million purchase of a 359,000-square-foot office building at 300 South Brevard Street in Charlotte from Dallas-based Stream Realty Partners. Hana also teamed with fellow South Korean investor IGIS Asset Management to spend $390 million on a collection of three Amazon distribution facilities.

Foshay said that the fervor from many South Korean and other Asia-Pacific investors to capitalize on the investment opportunities presented by COVID-19 was such that some groups would go through the process of sending representatives out to travel to and from the U.S. They were willing to quarantine for 10 to 14 days, both on arrival and before departure, in order to see an asset and seal a transaction.

His team brought four Korean bids and one Singaporean bid to the table for 1918 Eighth Avenue, a 500-foot skyscraper in Seattle that ultimately was sold to CPPIB (Canada Pension Plan Investment Board) and Hudson Pacific Properties. Canadian investors are usually the predominant force among international investors, typically making up around half of cross-border investment into U.S. real estate, given their proximity and familiarity in the space; these players were leaders in cross-border investment in 2020.

“[The Korean and Singaporean bids were] very competitively priced,” Foshay said. “Our client, JPMorgan, was keen to close before the end of the year and went with an investor with a faster closing time. But, it’s an example of these players out of Asia-Pacific pursuing core prime assets and the expansion of that into office [late last year].”

German funds also benefited from more favorable hedging costs, but rather than jump into opportunities like their Asia-Pacific counterparts, they were more reserved in 2020, aside from a couple of big splashes.

“[German funds are] underwriting deals that fit requirements, but they’re seeking to generally wait this out until [travel is easier],” Foshay said. “They require members of the investment committee to travel and see the assets, and domestic laws require that German valuers sign-off on these acquisitions.”

Primary coastal markets have been the traditional playing ground for cross-border investors, but if Mirae Asset’s nearly $400 million warehouse portfolio acquisition is any indication, the sophistication of these investors has them diving into high-growth secondary markets.

CapitalLand engaged in a joint venture with an Austin-based developer for a $300 million residential development in the city, and Singporean REIT Mapletree scooped up a three-property office portfolio in North Carolina’s Research Triangle for $189 million; both deals closed in the fourth quarter.

“There’s definitely been an expansion beyond the classic, super-six gateway markets,” Foshay said. “This dislocation has presented an opportunity to invest in a less-competitive environment, and drivers of lower hedging costs are backing that trend up.”

Some large transactions were had in 2020 by Middle Eastern institutional players, too.

Qatar First Bank dove into Phoenix, one of the fastest-growing secondary markets, with its purchase of Grand 2 at The Grand at Papago Park Centre office property for $188 million.

But the buck doesn’t stop with the large asset managers and institutional investors.

Ultra-high-net-worth individuals out of the Middle East have been allocating more of their portfolios to real estate investment over the last few years, as its prospect as an avenue for wealth preservation becomes more appealing. About 29 percent of these groups increased real estate allocations in 2018, which could point to why the region exhibited an uptick in activity in the sector in 2019, per data from Knight Frank that was released in early 2020.

“Folks are very excited about U.S. real estate,” said Berkadia’s Bhatt, who focuses on sourcing and arranging joint venture equity from foreign and domestic institutional capital providers, many of which are family offices out of Persian Gulf states.

The Middle East has carried only just over 4 percent of acquisition volume over the last three years, averaging about $2.2 billion in volume from 2017 and 2019, according to data from JLL released last fall. Cross-border investment into U.S. real estate from these investors fell by around 78 percent from 2019 to 2020, after a busy 12 months leading up to the fall of 2019, which saw the region grow its market share among its overseas investment peers to about 15.5 percent, from 7.2 percent in the prior 12 months, according to information from Knight Frank.

“We’re not concerned about volume having dropped off, it’s a factor nobody controls, but people are starting to ask the right questions and are really moving the dialogue along on opportunities,” Bhatt said, adding that family offices out of the Persian Gulf have been inquiring, as recently as December, about diving into the burgeoning single-family rental space.

“There are some groups that have invested stateside as LPs in multifamily and are very interested in figuring out single-family as a subsector within it,” Bhatt said. “For the most part, across Asia, Europe and the Middle East, there is an interest in single-family for-rent space. Even within the U.S., we’ve seen a number of [U.S.-based international firms] who have opened up to that space.”

He said the last 10-month period has helped these investors re-evaluate what “exactly they want to achieve with their U.S. real estate investments, and it has given them time to dig into areas they weren’t looking into before. And it’s given us an opportunity to talk about multifamily more. That’s opened up a whole new angle for many groups to look at different markets, where many were very focused on coastal gateway markets in the past.”

The appeal of growth capital in the form of platform-level investments as a way to further diversify their holdings has also been a draw, Bhatt said. It’s become a different way for family offices out of the Middle East to look at the investment space, and opens up a door for better returns as opposed to investing as a limited partner.

Sir Anthony Ritossa, founder and chairman of single-family office Ritossa Family Office, told Arabian Business last October that low interest rates, a solid leveraged return in the U.S., and an appreciation of the fact that “Gulf currencies are pegged to the U.S. dollar,” along with unfavorable investment conditions in Europe, has made prime targets out of areas like central and south Florida; Texas; Washington, D.C.; and Chicago.

He added that “U.S. property continues to be a priority for the larger family offices and sovereign wealth funds whose core holdings in international real estate are largely in the United States … [Gulf] Investors view U.S. real estate as more stable than other parts of the world.”