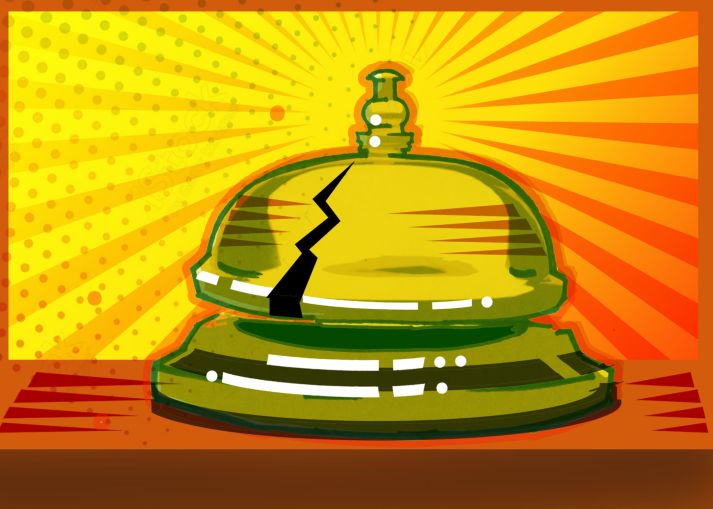 Checked out: What now for the massive hotels of Manhattan? Illustration: Val Bochkov

One feature of post-COVID New York City just may be large, hulking, dark buildings, a legacy of the hotels that have or will have closed permanently due to an extreme revenue shortage brought about by lockdowns that deprived them of their clientele.

At least four hotels by mid-November had announced they were closing permanently, according to hospitality research firm STR. And they are likely to be joined by others as the crisis rolls on.

“It’s costing them hundreds of thousands of dollars [a month], or, in some cases, higher than that, to remain closed,” said Sean Hennessey, chief executive officer of Lodging Advisors and an assistant professor at the Jonathan M. Tisch Center of Hospitality at New York University. “In order for these hotels to reopen, the numbers could be in the many millions of dollars. Employees are scattered and need to be re-hired or retrained. Right now, the outlook looks painful.”

The pandemic and the wreckage to the top line of each hotel’s balance sheet has accelerated a trend that was already under way, Hennessy said. That is, many Manhattan hotels are more than 50 years old and approaching the end of their useful life. The hotels on the Upper East and Upper West sides are the most prone to this phenomenon, he said.

“You’ll see some hotels at the very luxury end of the market, many of those properties are sort of the ‘grand dame’ type of hotels,” he said. “That’s the kind of architecture and location that would make them well-suited for residential conversion.”

But, both the decision of what type of property works best and planning to implement that change could run months, if not years, Hennessey said. He mentioned the Roosevelt Hotel, a 96-year-old dowager just west of Grand Central Terminal, as an example of a property slated to close that could reopen as a hotel, though it’s long been assumed that it would be razed and replaced with an office tower. Pakistan International Airways owns the 1,000-plus room hotel, famed for Guy Lombardo’s New Year’s Eve big-band bash, and where New York Gov. Thomas Dewey spent election night in 1948 when the Republican presidential nominee lost to President Harry Truman in a historic upset.

The Hotel Pennsylvania, the New Yorker and the Milford Plaza, now known as the Row Hotel, are other examples of properties rumored for years as possible office sites, Hennessey said.

Others besides the Roosevelt that have announced their permanent closing include the Hilton Times Square, the Courtyard by Marriott in Herald Square, and the Omni Berkshire Place, according to the New York Times.

Councilman Keith Powers, whose district includes many Midtown hotels at risk of shutting permanently, said he is “extremely concerned,” and has his staff looking into the problem.

“They employ lots of people, and they are a big part of our economy,” Powers said. “They’re a foothold to the middle class for many New Yorkers. They’re a sector we rely on.”

Most, if not all, of the hotels in the city shut down at least temporarily in the spring, including such massive workhorses as the Hilton New York on Avenue of the Americas. On a nationwide basis, 19.43 percent of securitized loans made to hotels were in arrears, meaning payments are at least 30 days past due, according to an October report by Trepp, a research firm which tracks commercial mortgage-backed securities. That’s actually down from the three months prior to that, when close to 23 percent were past due.
And, while the delinquency rate for New York-area hotels peaked at just over 40 percent in July, it’s down to a still alarming 30.44 percent as of October, according to Trepp.

Many hotels have reopened to a greatly reduced demand. Some have volunteered to house the homeless or hospital workers on the front lines fighting the virus. Federal Emergency Management Agency funds may be used to pay hoteliers who agree to take such people.