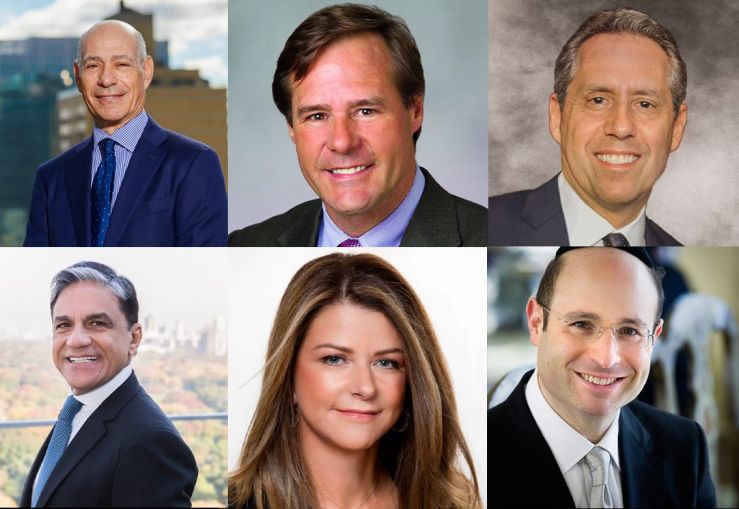 There are a lot of things New York real estate veterans will argue about, but there is one thing they agree on: New York will triumph.

“I never betted against New York, and I will not bet against New York,” Joe Moinian, CEO of the Moinian Group, said in conversation with Commercial Observer Editor-in-Chief Max Gross and Finance Editor Cathy Cunningham.

That was the main takeaway from the star-studded event dedicated to celebrating public service co-hosted by CO and the Real Estate Board of New York on Jan. 28, which included a virtual red carpet, remarks from real estate leaders, and panels composed of the who’s who of the business on leading the industry through COVID and 2021.

“We can see the light at the end of the tunnel,” declared Chad Tredway, director and head of real estate banking at JPMorgan Chase, one of the celebration’s sponsors, who sits on REBNY’s board of governors, “and my challenge for all of us coming out of COVID-19 is to make our city even stronger than it was before. Let’s tackle increasing diversity; let’s drive political unity; and let’s come together as one amazing industry to reinforce New York City as the leading city in the world.”

With the city facing the unprecedented challenge of an economic crisis wrought by a health crisis that is not yet over — and much of it happening in the midst of an especially bitter election year nationally — New York certainly feels like it’s at an inflection point.

CO and REBNY convened the event, titled “Celebrating Public Service,” to look back at 2020, at the people who did their part to pull the city through one of its darkest years, and to look ahead at 2021 and what it will take to emerge from the crisis.

“The real estate industry plays a critical role in our city’s economy and civic life, and, because of that, we must play a central role in its recovery,” said Douglas Durst, REBNY’s newly installed chairman.

Without mincing words on the challenges facing the city, Durst said there were four immediate issues that needed to be addressed: advocating for federal aid, advancing a pro-growth agenda in Albany and City Hall, prioritizing affordable housing, and addressing crime and public safety.

“To be a progressive city, we must also be a prosperous city,” Durst said. “We must advance a pro-growth land-use agenda that will kickstart our economy and address long-term needs.”

Many of the guests alluded to Mayor de Blasio’s administration, and stressed the need for more collaboration between business and government.

When asked what REBNY’s priorities should be for 2021, Ralph Herzka, chairman and CEO of Meridian Capital Group, said it needed to advocate on behalf of landlords and owners.

The government should remove barriers rather than erect them, said CBRE’s Tighe. “You have to ask yourself, if you have a community board made up of people who are obstructionists only, can the city continue to flourish?” Tighe said. “While we want the community engaged, this is not the land of ‘No.'”

Winston Fisher, principal of Fisher Brothers, pointed out that the onus is on the real estate community to repair relations with the community and, thereby, with the politicians who make policy.

“There’s a trust issue, and the real estate industry is on the losing side; we’re being left out of the conversation,” Fisher said, referencing the distrust many New Yorkers feel for the real estate industry, which is fueled by growing outrage over widening inequality. “It is imperative that we take a fresh look at how we can have better relationships, because we need our voice to be heard, and right now it’s not.”

Many professed hope that with a new mayor and turnover of two-thirds of the City Council in the next year, there will be a change in tone and policy that’s friendlier to growth. “People need to vote,” Malkin said.

Many of the guests and discussions also centered around the state of New York City’s real estate market. While many professed varying levels of cautious optimism, the specifics of when the city will be back — when the theater marquees will turn on, the tourists will return, the offices will be occupied, the restaurants will be packed, SoHo and Times Square will be overrun — and how much damage it will suffer in the interim, were harder to pin down.

“What has happened with urban office employment is not a cyclical change, it’s secular,” said Tommy Craig, senior vice president of Hines. “It’s too early to understand the long-term world of a post-Zoom world. Not only have we lost 500,000 jobs, but the fundamental relationship between work and place is being reassessed.”

MaryAnne Gilmartin said she thinks this was a time of great opportunity for those ready to bet on cities.

“There’s a possibility we’re in a moment now where, if you can seize the moment and you can extract the value proposition, and the concessions or the distress, the minute the world comes bouncing back — and I do feel like we might have a Roaring 20s moment at the end of the year — when everyone feels super-bullish about cities, I want to be there and I’m preparing for that,” she said. “Of course, there has to be enough of a discount to feel that the risk is worth taking.”

Many guests pointed to New York’s talent pool, both its quality and its size, as something that few cities can offer— and, of course, to its culture. “New York City culture,” said HqO Founder Chase Garbarino. “That’s not going to pop up on Miami Beach.”

The program included a tribute to the late David Dinkins, the 106th mayor of New York City, as well as tributes by James; Been; and Carl Weisbrod, now of HR&A Advisors, who served as chairman of the New York City Planning Commission and as director of the NYC Department of City Planning.

Others who appeared on the who’s who from the public and private sectors included Ben Brown of Brookfield, Charles Bendit of Taconic Partners, Alfred Cerullo of the Grand Central Partnership, David Falk of Newmark, Leslie Himmel of Himmel + Meringoff Properties, Bob Knakal and Peter Riguardi of JLL, Jessica Lappin of the Alliance for Downtown New York, Haniel Lynn of Kastle Systems, Nelson Mills of Columbia Property Trust, Bruce Mosler of Cushman & Wakefield, Nadir Settles of Nuveen, Kathryn Wylde of the Partnership for New York City, Andrew Rigie of the New York City Hospitality Alliance, and Laurent Morali of Kushner Companies. In addition to Cunningham and Gross, panel discussions were moderated by Fried Frank’s Jonathan Mechanic, Kramer Levin’s Jay A. Neveloff and Thea Kruger of Berdon LLP.

“You should never bet against America, and particularly New York,” said Silverstein, whose eponymous firm developed several of the World Trade Center buildings in the wake of 9/11. “This town always comes back —stronger, bigger, better than ever.”