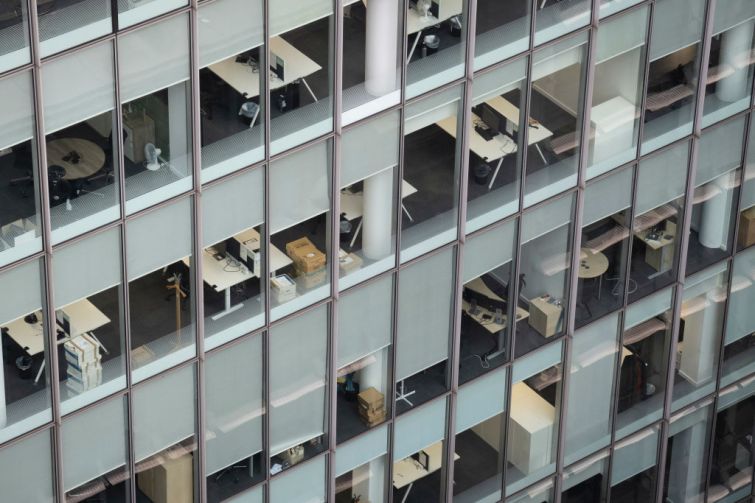 In a week sure to cause office brokers and landlords some agita, it seemed nary a day went by without some major company announcing a downsizing of its office space.

First it was BuzzFeed consolidating two 217,000-square-foot Manhattan offices to only 107,000 square feet at the former New York Times headquarters at 229 West 43rd Street. The media company took over that office after it bought Complex Networks for $300 million last year and said it had more than enough space to house both companies.

Those firms joined Amazon, Facebook, Yelp, UBS, Netflix, HSBC Bank USA, Twitter and Salesforce in pulling back on their office footprint in recent weeks. And it wasn’t just office feeling the shrink.

The aforementioned Amazon, industrial’s favorite tenant, plans to close or delay the opening of 49 delivery processing centers in the United States, soon after the e-commerce behemoth decided to cut the middle man out and just buy other warehouses itself.

Many have pointed to the fact that remote work seems here to stay as the reason for the office shrink. However, others have seen the news as already struggling companies using hybrid as an excuse to trim the fat by ditching expensive offices (and us dastardly journalists only focusing on the negatives).

But, for those still committed to in-person work, even getting to the office might be a struggle in the Big Apple as a report found that the Metropolitan Transportation Authority might not be able to access nearly $12 billion — or 20 percent — of necessary financing for subway repairs.

Silver Linings
In the midst of all this office gloom, we saw some blockbuster deals this week.

Nearly lost in the BuzzFeed news was the fact that software company Monday.com agreed to take over BuzzFeed’s former 110,000-square-foot office to expand its New York City headquarters. Meanwhile, law firm Freshfields Bruckhaus Deringer signed a 15-year lease to grow its offices from 110,000 square feet at 601 Lexington Avenue to 180,000 square feet at 3 World Trade Center. So don’t count out the office yet.

Over in Brooklyn, Two Trees Management secured $79.8 million in financing for its Domino Sugary Refinery redevelopment in Williamsburg, which includes 600,000 square feet of office space.

In other financing news, Toll Brothers sealed $98.2 million of construction financing for its planned mixed-use project on the Upper West Side.

While there were some bright spots in the office market, things still weren’t looking too rosy overall. Investment in commercial real estate reached $190.3 billion in the second quarter of 2022, the third highest quarterly total in two decades, but most of that was driven by multifamily and industrial, according to a Newmark report. Meanwhile, the U.S. office market declined further.

On the political front, while Democratic Socialists of America incumbents held their seats against more moderate Democrats backed by real estate in New York primaries, progressives did not gain enough ground to push through the good cause eviction bill next year, as The Real Deal pointed out.

Plus, in news sure to warm most New Yorkers’ hearts, former Mayor Bill de Blasio will become Massachusetts’ problem again (at least part-time) as he scored a job teaching public health at Harvard University.

He will lecture Ivy Leaguers about his handling of the pandmeic and other health issues during his two terms, and a Harvard spokesperson told the Wall Street Journal that de Blasio’s experience will “be helpful to students who want to hold public office.” (Pro tip for his students: It’s really bad political optics to hit your local gym during a two-hour standoff where a firefighter was shot. But this writer went to a public college, so what do I know?)

Lawsuits and Shake-Ups
Your beloved author wasn’t the only one feeling a bit contentious this week as several real estate firms duked it out in court.

Landlord Kent Swig was hit with a lawsuit for failing to pay $342,275 in rent on a Madison Avenue office he sublet; IG Fit Health Club sued its landlord Stellar Management to force it to extend the gym’s lease at 242 East 14th Street; and Unibail-Rodamco-Westfield took on the owners of the Proper Hall beer garden to get back $2.5 million in back rent and tenant improvement allowance for the spot that never opened at the Westfield World Trade Center mall.

This week also saw a shakeup at Columbia Property Trust with longtime president and CEO Nelson Mills vacating his post to be replaced by Oxford Properties Group executive Adam Frazier. Mills isn’t completely leaving the landlord, as he’ll remain as non-executive chairman of its board.

And Now for Something Completely Different
Everybody’s favorite mayor who says the word “swagger” a lot, Eric Adams, drew more questions regarding his late night habits. The New York Times tailed hizzoner and found he spent most evenings in June dining at Osteria La Baia, an Italian eatery run by Adams’ close friends, the Petrosyants brothers, who also happen to have felony convictions, tax debts and other legal issues.

And if you want to learn more about the brothers feeding our mayor most nights, regular Commercial Observer freelancer Aaron Short has you covered in New York with a long profile of the restaurateurs. The pair will also be behind the upcoming chophouse taking over the former New York Yankees Steakhouse in Midtown.

Until next week, enjoy the ever-dwindling summer days!