More companies either ditching space or mulling it 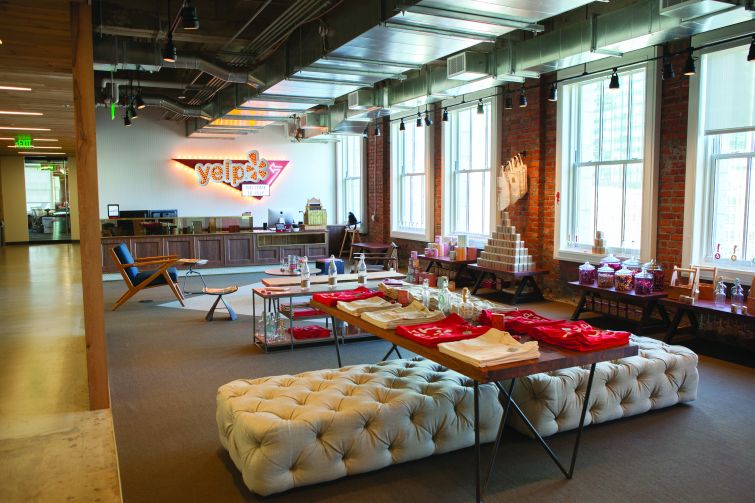 Yelp review can change your choice of restaurants. Will the tech firm’s decision to close down offices convince other firms it’s time to do the same?

As Yelp announced June 23, with a blog post from CEO Jeremy Stoppelman that praised fully remote as the employee-focused future of work, the company is eliminating mandatory time in the office. Yelp’s plan will close 450,000 square feet of consistently underutilized offices in New York City, Washington, D.C., and Chicago — a spokesperson said 2 percent or less of the space in these offices was used on a weekly basis — and shrink the firm’s Phoenix footprint. Hybrid work, Stoppelman declared, is a “hell of half measures.”

Since then, a number of other large firms have taken similar steps. UBS shrunk 15 percent of its London office space, citing work from home, and Netflix announced plans to sublease tens of thousands of square feet of office space in Burbank, Calif., and a handful of other locations. Salesforce, San Francisco’s largest private emloyer, listed over 412,000 square feet for sublease in that city in early July. At the same time, Yahoo and law firms such as Duane Morris have shrunk their footprint; the latter will cut space by a fifth in five years, using lease expirations as reasons to reorganize offices and realize “major savings.”

Companies are currently contending with the potential for a significant downturn — and, in the case of Netflix, poor performance — so reasons for shedding space vary. Some may simply be hiding behind the pandemic. Still, these shifts could signal the start of a cascade of subleasing and shrinking footprints, a sign that the overwhelming corporate caution about giving up the office for good is changing.

Many experts see Yelp as an imperfect sign of the shift – one broker notes that the firm has been trying to sublease its New York office space for two years – but that doesn’t mean change isn’t afoot. The skeptics’ case for a rapidly accelerating crisis in commercial real estate rests on a combination of companies’ sometimes extreme reticence toward giving up the presence and the power that comes with a fixed office space, an already crowded market for sublease space, and the uncoupling of job growth and real estate expansion.

In many ways, office space isn’t disappearing, it’s simply becoming invisible and unused. Green Street senior analyst Daniel Ismail said there’s roughly 4 billion square feet of office space nationally, and a staggering 20 percent of that is available for rent. Why not, on the precipice of a downturn, take the path of least resistance, cut costs and make employees happy by codifying remote work? Fifteen percent less room — Green Street pegs the nation’s overall loss in aggregate office demand at 15 percent — isn’t going to substantially change operations. That’s Yelp’s take; a spokesperson said that, “due to the varying stages of lease agreements, the exact expense reduction is unknown. As they are identified, we’ll reallocate resources toward our people and the growth of our business.”

“Cutting office space and saving those expenses as a company is a rare win-win,” said Ismail. “I think there will be a slow trickle of announcements as companies figure out what works for them, which will likely result in a shedding of office space. There’s tens of millions of square feet of office space, invisible or shadow space, that is effectively obsolete at this point.”

It’s important to note that remote work isn’t necessarily tied to a reduction in space. Firms aren’t suddenly walking out on 95 percent of their space, said Ismail. But some are unloading and subleasing, or even, like HSBC, trading up to higher-quality office space and moving into Manhattan’s Hudson Yards. With nearly 900 million square feet of U.S. lease renewals coming up by 2025, according to JLL, companies looking to move or renew in today’s extremely tenant-friendly environment will find “the world will be their oyster,” said Gabe Marans, an executive managing director at Savills.

According to Caroline Ogawa, senior principal in the human resources practice at management consultancy Gartner, research shows the shift to hybrid, and the return to office, is still extremely complicated. Numerous companies have introduced iterations on remote work policies, from becoming fully remote to embracing some version of trusting white-collar workers to do what’s best for themselves. Hybrid means fewer in-person interactions, but not necessarily a sacrifice in culture. Corporations have been cautious about making a jump toward remote, due to elevated levels of turnover amid a slowing but still competitive labor market. But moving quickly the other way invites whiplash. Gartner research shows that firms that force their employees back to a fully on-site arrangement could lose up to 33 percent of their workforce.

But chief financial executives are implementing cost-saving measures. Twenty percent are doing so now, per Gartner surveys from June, and 40 percent plan to in the next few months, including slowing hiring. Los Angeles-based management consultancy Korn Ferry, for instance, has saved $10 million annually during the pandemic from giving back 230,000 square feet to office landlords, and will decide by the end of the year whether to shrink 10 or 15 percent more.

Nationwide Insurance announced in April of 2020 that it would move to a hybrid model, accelerating a plan to scale down its national real estate footprint. Since then, the firm has closed roughly a dozen offices, which a spokesperson said helped “significantly lower our expenses, which in turn has a direct and positive impact for our members,” as well as improve operational efficiency. The results of this permanent policy shift? Half of workers permanently work from home, 40 percent are on a hybrid schedule, and the remaining 10 percent work full-time in the office, allowing the firm to grow headcount without needing to lease additional space.

That said, many of the larger firms that have embraced these cultural changes during the pandemic haven’t necessarily done so with an eye toward real estate strategy or shrinking space.

Atlassian, an international software firm, adopted a “team anywhere” approach allowing workers to “choose every single day where they want to work.” The firm is designing its future real estate spaces to “reflect intentional togetherness” — focusing more on large group gathering and collaboration as opposed to everyday work tasks — including an Austin office opening in late July and a massive hybrid timber HQ in the home country of Australia opening in 2026, according to a senior PR manager at Atlassian. 3M introduced the Work Your Way program last October, a “trust-based work approach” that, according to a spokesperson, “is not based on real estate or finance decisions.”

One important issue holding back firms from shedding more cubicles and corner offices: the crowded sublease market. Firms with 10-year leases already priced in, for instance, are unlikely to shed space via subleases if it’s unlikely the sublease will get taken.

“There’s a glut of sublease space out there right now,” said Will Burchfield, a Colliers vice president and head of its flex advisory. He’s also seeing flex operators retrenching, with relatively empty spaces and plans to expand on hold. “Companies are kind of hesitant to go ahead and join that parade, and make a full-scale change. Right now, we’re in the upside-down place, like Stranger Things; nobody knows what’s working and has fully understood the implications of remote work.”

What’s less reported on, but perhaps more telling long term, is how firms are increasing headcount without adding more space, a de facto reduction in future demand for office space.

Accommodating hybrid and remote workers has led to an uncoupling of job growth and absorption, and allows existing office space to work for many more employees. Year-to-date comparisons of job growth to office absorption show the largest mismatch in three decades. A Green Street analysis notes that “while office-using jobs have grown, employees consumed less space on average and leasing activity remains roughly 25 perent below 2019 levels.”

Densification was a major headwind before the pandemic; the rise in open-office plans between 2010 and 2020 resulted in the longest prolonged mismatch between higher job growth and less office absorption — or space taken off the market. Peter Miscovich, a JLL executive managing director with decades of experience in workplace strategy, argues that the concept of the office has always been in dynamic flux, hybrid has been around for decades, and space optimization has been a priority of top companies for years. The pandemic merely accelerated existing trends.

“Nobody was in the office five days a week in 2019 either,” Miscovich said. “You’re going to see accelerated disruption across the commercial real estate industry. I advise clients to take a surgical approach and not make rash decisions.”

Labor is, of course, key to many companies’ thought processes. According to Brad Bell, a professor at Cornell and director of its Center for Advanced Human Resources Studies, firms are still juggling how much real savings they get from cutting their space versus how much extra cost they may take on from constant turnover due to a degradation of workplace culture from remote working. There’s also a suggestion that a recession would diminish the bargaining power of workers and make it easier to force them back into offices. It’s unclear how that shift will affect retention long term, especially for workers who have grown to appreciate the time saved by avoiding commutes.

Vestian’s Silver also sees office vacancy rates increasing in major markets, from 20 percent to approaching 40 percent, which will eventually have a serious impact on landlords and their ability to refinance and pay loans. With tenant retention rates hitting 33 percent in early 2002, per Green Street, building owners will increasingly be forced to pay for inflation-adjusted new tenant improvement packages. “The situation will improve in 2025,” he said. “You won’t really see new office space get built over the next three years.”

“If I were being poetic, I would say that the pandemic killed the office as we know it,” Savills’ Marans said. “The question is, how do we reimagine the modern office?”