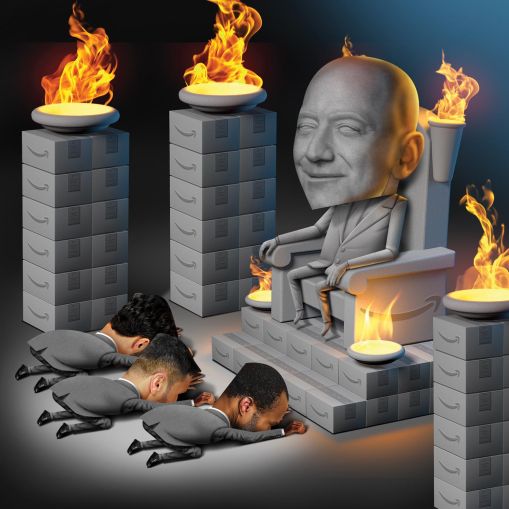 Amazon likes its numbers round, and it likes them in headlines. The e-commerce behemoth has been on a tear over the last several months, leasing, outfitting, and opening hundreds of millions of square feet across the country, in stark contrast to the general economic gloom.

Amazon opened 100 warehouses in September alone, in addition to the 100 distribution facilities and 1,000 neighborhood delivery hubs it leased, or plans to lease, in the near future.

It has more than 100 million square feet of planned space underway, and has ramped up its activity across the United States. These include at least six new warehouses in Georgia, four in the Atlanta area; at least seven distribution centers in Texas, near Dallas, Houston, Austin and El Paso; five scheduled to open in Arizona by December, doubling the number of its facilities in that state; and 12 in California.

Online sales have skyrocketed during the pandemic, so it’s no surprise that the
e-commerce king is a pandemic winner. In the process, Amazon is taking a lot of industrial real estate with it.

Of course, Amazon is not the only winner. Retailers such as Walmart, Home Depot, Petco and Costco are also taking huge swaths of industrial space, along with shipping companies, such as FedEx and UPS, and an e-commerce-spawned ecosystem of third-party shippers, distributors and storage facilities.

Additionally, developers are now building with Amazon in mind, while investors are willing to pay top dollar for an Amazon-tenanted property, as they recently did in Torrance, Calif., where a property that Amazon will occupy sold for twice the average price per square foot in the area.

“Amazon’s got such good credit, and it’s such a strong company, I think any developer would want as many Amazon deals as they could get,” Pete Quinn, national director for Colliers International’s industrial leasing platform, said.

“With Amazon, every person in the United States is a potential consumer, so they really take a national look,” Quinn said. “Big cities always have more square footage, but they still need to get [their product] to the smaller markets as well.”

Can it be too much of a good thing?

You can love ‘em, or hate ‘em — or both — but it’s impossible to ignore them.

“Whether you have Amazon as a tenant or not, you’re exposed to them because they occupy so much space,” said Alex Klatskin, a partner at Forsgate Industrial Partners. “At a certain point, we’re a little overexposed.”

It should be noted that, while Amazon surpasses any other company in leasing velocity over the last year, in terms of total space and geographic coverage, its total footprint still falls far short of more mature players like Walmart, which includes its massive retail stores.

The pandemic accelerated the adoption of online shopping, condensing into a few months what might have taken years, Kendall said, and successful e-commerce players are expanding and adapting quickly.

“[That’s] a dramatic increase that, normally, would have taken five years,” Kendall said. “COVID-19 supercharged that.”

Even prior to the pandemic, e-commerce sales were growing, and the industrial properties that support the supply-and-distribution chain were attractive investments.

“The market was already super strong before the pandemic started,” said Sara Barnes, an Avison Young researcher in Atlanta. “So, any impact it has had has still been positive.”

Barnes used to live near a small Amazon distribution facility in Cobb County, and she always knew when holiday shopping season began. “I would pass it every day on my way to work, and the amount of unmarked, white sprinter vans that would just be lined up coming out of that one-way … they would just be coming out in droves,” Barnes said.

As of this year, the number of white sprinter vans in Atlanta, as well as trucks of every shape and size, is likely to increase. Amazon has made significant inroads in the Atlanta area in 2020. The company signed four leases, three of which topped one million square feet, on top of the completion, in September, of a 2.8 million-square-foot facility in Stone Mountain in Gwinnett County.

Amazon’s focus on Atlanta makes sense, because it serves a regional hub for the Southeast, and it’s been building or leasing along the I-85 corridor, which runs north to south through the metro area.

“They kind of run that 85 corridor,” Barnes said. “So, yes, they’re servicing Atlanta, but going north, they can reach South Carolina in an hour, North Carolina in three hours, they can go west into Alabama, north into Tennessee, [and] south into Florida.”

Seefried is also the developer behind the four-story Stone Mountain facility, which is Amazon’s first multi-story fulfillment center in the state, and for which Amazon began hiring 1,000 jobs in September.

Seefried, which has been Amazon’s landlord since 2010, will often build on spec, and work  with local governments through entitlement and approval processes. The company will often announce Amazon as a tenant once those approvals are completed.

In these deals, it’s not always clear at which point of the development process Amazon comes to the table. In Stone Mountain, the project, dubbed “Project Rocket,” was approved in 2018, a common moniker for Amazon sites. While there were rumors that Amazon was involved, the company wasn’t confirmed as the tenant until 2019. The Atlanta Journal-Constitution later revealed that Amazon received $20 million in state and county subsidies for the development.

According to Georgia’s open records laws, government agencies don’t need to share details of an economic deal until it’s been all but closed, so if Amazon had been involved from the beginning, the developer, the planning and development agencies, and Amazon itself would not have needed to reveal that.

Amazon and Seefried did not return requests for comment.

In the current environment, most developers can build industrial facilities on spec with the confidence that they’ll find a tenant, and most do, said Kendall. The majority of the 330 million square feet of industrial space currently under development is being built on spec, he said.

That’s particularly true for more constrained markets like Southern California, North Jersey and Seattle, he said. Though, in other markets, like Atlanta, Chicago and Dallas, developers are more likely to build to suit.

In fact, in tighter markets, product is moving so quickly that owners are turning down warehouse tenants. In Toronto, where there were just two buildings available in the entire market, a developer rejected a potential tenant because they needed board approval, which would take a month, Quinn said. The developer had enough other tenants lined up that it could afford to do so.

A big driver for all of this demand, from Amazon and other e-commerce and retail companies, has a lot to do with toilet paper.

The run on toilet paper in the early weeks of the pandemic, along with other household essentials, led to empty shelves in supermarkets, sold-out goods online and lengthy shipping times.

It remains one of the more indelible images of the crisis, and it caused an immediate shift in the industry toward securing a more robust supply chain that has, in turn, led to an explosion in demand for warehousing space.

Three factors are driving this, according to a recent Colliers International report. First, the rise in e-commerce sales has led to demand for about 750 million square feet nationwide. Second, the shift from a just-in-time mentality has led companies to build a buffer stock of roughly 5 percent, leading to another increase in demand for about one billion square feet over the next five to 10 years. Plus, COVID-19 has accelerated the shift from offshoring to onshoring more manufacturing and more stock to further bolster the supply chain.

“Companies are moving some of the supply chain from Asia to Mexico and to the Southeast,” Kendall said, leading to an appetite for another 750 million to one billion square feet of space.

“That’s an additional 2.5 billion square feet of demand that didn’t exist a year ago,” Kendall said.

With such robust demand, investors are all-in, especially in a commercial real estate universe where the pandemic’s public health and economic effects are pummeling every other sector.

That includes investors of all kinds: existing industrial investors, who are reallocating capital away from office and retail toward industrial; institutional investors wading into industrial for the first time; and global investors looking for safety in volatile times or searching for yields they can’t find at home.

“There’s never been more capital that wants to own industrial,” Kendall said.

Depending on the investor, they might enter at any stage of the pipeline, from unentitled land to tenanted facilities. The safest category would be a tenanted property to a strong tenant with a long-term lease, and Amazon fits that bill.

“They are definitely viewed as investment grade,” Kendall said. “When you have an Amazon lease for 15 years, it appeals to a wide variety of investors. But you would see the same sort of investor appetite for a Walmart lease.”

Even with a company as strong as Amazon, oversaturation or overexposure always contains some risk, according to Forsgate’s Klatskin.

One potential risk for investors is that Amazon’s model is not easily replicable in smaller markets. A warehouse in California’s industrially busy Inland Empire will easily find a new tenant once Amazon’s leases expire. A facility in, say, Tucson, Ariz., might be less attractive to anyone other than an
e-commerce tenant with Amazon’s reach, said Kendall.

“If Amazon doesn’t extend their lease in 15 years,” he said, “who’s going to take their space?”

Another wrinkle is that institutional landlords, such as Prologis, Amazon’s largest landlord and the largest industrial landlord in the United States, might have internal checks that limit exposure to individual tenants or individual geographies, but that’s not a reflection of the tenant’s creditworthiness.

“The more Amazon deals that happen, there might be some institutions who can’t go through with it,” Kendall said.

Amazon’s might as the largest occupier of industrial space also gives it negotiating power with landlords, cities and developers, but Colliers’ Quinn said the market is too strong for them to wield it at the moment. “I don’t think [Amazon] is negotiating below market,” he said. “Developers have all the negotiating power right now.”

Then, there are the regional ecosystems that Amazon often spawns. The interconnectivity can make it difficult to quantify how much industrial space in a market is actually dependent on Amazon, or on e-commerce in general.

“If someone orders patio furniture through Amazon, it might never enter an Amazon warehouse,” Kendall said.

“There are entire companies that are procuring warehouses full of goods and putting them out through Amazon,” Klatskin said. “They have 1,000 SKUs [stock-keeping units]. They don’t sell through traditional retailers. They just go through Amazon.”

In Atlanta, the largest lease of the third quarter went to Amazon competitor Radial, an e-commerce fulfillment company that works with online retailers, such as DSW Shoe Warehouse, GameStop and Shoe Carnival, as well as hundreds of smaller online retailers.

The proliferation of e-commerce-related firms could mean dependence on Amazon, or it could signal the wider shift to an e-commerce ecosystem in general. As traditional retailers continue to collapse, and a younger generation of Instagram shoppers matures, retail models will likely continue to favor the direct-to-consumer supply chain.

Barnes, Avison Young’s Atlanta researcher, is not concerned about Amazon’s longevity or the health of the industrial market. “Even when the pandemic has cooled off,” she said, “there’s always going to be a need for Amazon.”