Amazon, Industrial’s Favorite Tenant, Is Starting to Buy Its Warehouses

The shift could upend one of commercial real estate's hottest sectors 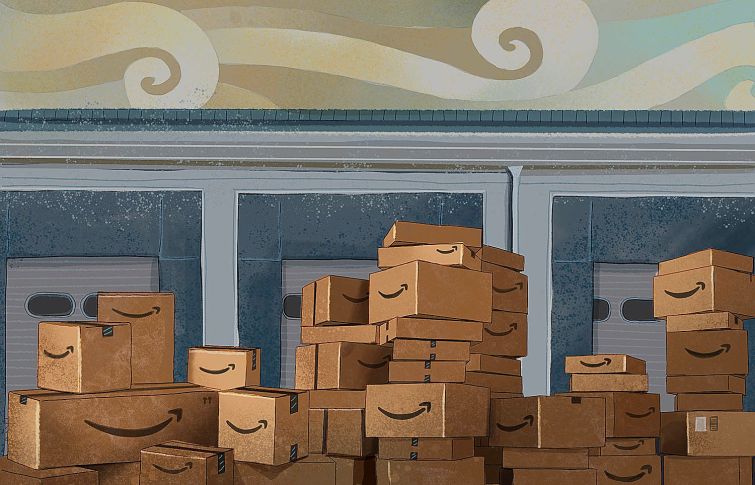 In the last couple of years, Amazon, the internet giant that dominates the e-commerce market, has let it be known that heretofore, it intends to largely own its vast order fulfillment space, rather than rent it.

For example, in September last year it reportedly paid about $75 million to acquire a 58.5-acre, undeveloped site in the city of Pleasanton, Calif, about midway between Oakland and San Jose, where it intends to build a state-of-the-art warehouse. Around the same time, it also paid $26.5 million for a 57-year-old office property in King of Prussia, Penn., which was expected to be redeveloped as a warehouse.

For the thousands of developers, from the small and local ones trying to eke out a living doing real estate to global players like Blackstone and Prologis, Amazon’s shift toward ownership is momentous and portentous. It means that the number one customer for logistics space in a market where logistics space has taken off like nothing else in commercial real estate is instead becoming every logistics landlord’s No. 1 competitor. The arrangement certainly works for Amazon, though.

“They don’t have to work with their landlords,” said Brad Tisdahl, CEO of New York-based commercial real estate consultancy Tenant Risk Assessment. “They get more flexibility. Number two, they’re so big, they have enough scale. Because their portfolio has grown to such size. That’s another factor. Plus, Amazon’s credit is pretty strong. ‘Why am I not using this to my own benefit? Why am I giving so much of that value to landlords, who can charge me a higher rent?’”

According to the reports, the volume of fulfillment and data centers that Amazon owned in North America came close to doubling in 2021, ticking up to 16.6 million square feet, from 8.5 million in 2020.

“There’s this change in strategy to try to own more,” said John Kim, a U.S. research analyst at BMO Capital Markets Equity Research, who covers Prologis, the largest publicly traded industrial real estate investment trust. “Amazon is Prologis’ largest tenant, by a wide margin, but it’s only 4.8 percent of its total rent. It’s not like it’s a double-digit explosion.”

According to a third-quarter 2021 report from Prologis, Amazon was indeed Prologis’ top customer, with 31 million square feet. No. 2 was logistics company Geodis, with 15.4 million square feet and paying 1.4 percent of Prologis’ net effective rent. In fact, the next three companies combined — Geodis, DHL and GXO — paid 3.9 percent of Prologis’ net effective rent, or less than Amazon’s number alone.

Kim sees Amazon’s move as two-sided. On the one hand, Prologis has to work harder to fill its buildings without its No. 1 go-to customer. On the other hand, if Amazon is willing to pay a premium to own its fulfillment space, that drives up the value of all industrial properties, including those of Prologis, he said.

“Amazon has taken the initiative to own some of the warehouses they occupy, as it benefits the business by giving them more control over operations, increasing efficiencies in the supply chain,” Bradley Norman, a spokesman for CoStar, said in an email. “Additionally, [it] is because it is becoming increasingly difficult to find logistics space due to tight vacancies, which is also pushing up rents. This favors ownership of properties over tenancy as owners can avoid the increasing rental rates as time goes on.

“Given the supply chain issues as well as the tight logistics market,” Norman added, “we expect Amazon will continue to purchase more properties in order to integrate their operations to derive increased cost savings.”

Amazon was the leading developer of industrial space nationally from February 2020 through March 2021, with well over $2 billion in development, according to a report from research firm Real Capital Analytics. Second was Seefried Properties, the only other firm with more than $2 billion of development. Still, Amazon was not among the top 25 buyers of industrial space during the first nine months of 2021, according to a spokesperson for Real Capital Analytics, suggesting that the pivot to acquisitions is indeed a recent twist — and that the internet godzilla has a lot of runway.

Atlanta-based Seefried is a merchant developer of industrial properties, meaning that unlike Amazon it is not a user of logistics space. The Real Capital Analytics report notes that Seefried started two projects in Texas that were each over 3.8 million square feet.

An attempt to get Seefried to comment on Amazon proved unsuccessful. A spokesperson said it has non-disclosure agreements with anyone who occupies the company’s buildings.

“From a business model standpoint, I do understand where Amazon is coming from,” said one prominent industrial developer who asked not to be identified due to the possibility — as with most industrial developers — of one day doing business with Amazon. “Because what Amazon has been seeing is they are signing leases and taking delivery of the space, and then the developer turns around and makes a hefty profit off of the Amazon lease. If I’m Amazon, I say to myself, ‘I’m the end user. It’s my credit that is driving the pricing. Why shouldn’t I be the beneficiary of the increased real estate value?’”

Because Amazon is a big company, its decision-making process is slow, he said, thus gumming up the transaction process and preventing other buyers, who probably can’t compete on price with Amazon anyway, from making a deal to buying a building or a site.

Amazon confirmed that it bought the Pleasanton, Calif., property. But spokesperson Lisa Campos said in an email the company doesn’t “currently have a policy on leasing versus buying properties since it isn’t a one-size-fits-all approach.” She added, “We typically look at each location and availability, and then determine the best outcome. In some cases that would be a lease and in others it may be an acquisition.”

Anyone who has ever been inside a vast Amazon “fulfillment” center knows they are a beehive of speed and precision, as orders are filled almost as soon as they are received off the internet from consumers. Robots that look like Roomba floor cleaners scurry around. Since they are controlled by computers, they know automatically where the merchandise is, so the hairbrushes, just to name an item, don’t have to be stored all together. Humans have to be certain that the computers got the order right before the boxes with the smiles on them are sealed and sent out, and that has created a mountain of controversy over whether their warehouse workers are being treated humanely, including whether Amazon is asking its workers to be too fast.

Two professionals familiar with a plan to build a 700,000-square-foot last-mile logistics facility at the former site of the Whitestone Multiplex Cinemas in the Bronx, said that Amazon was no longer expected to move in there. The property is being co-developed by Innovo Property Group and Square Mile Capital. A spokesman for Square Mile declined to comment, while a spokesman for Innovo didn’t return a call.

The Innovo website about the property at 2505 Bruckner Boulevard depicts a state-of-the-art distribution center, but studiously avoids showing brands of any occupants. Richard Warshauer, an industrial broker focused on the five boroughs in the New York office of Colliers, said the absence of Amazon as a user should not hurt the project.

“It’s extraordinarily hard to find development sites,” he said. “The ones where Amazon has signed leases have sold at gigantic numbers. Most of the ultra-modern buildings like [the Bruckner site] have leased up very quickly, so I don’t think the developers there are going to have any problems with that.”

Pete Quinn, Colliers’ national director of industrial services, said that Amazon has had an enormous impact on the industrial side of commercial real estate. Industrial vacancy rates plunged to record lows during 2021, according to various brokerage reports, and even a brisk clip of development can’t satiate the ongoing demand.

“They’re acquiring so much property that we’re running out of product,” he said of Amazon. “The biggest challenge our brokers face right now is product. Developers are developing at a record pace. The three issues facing our market right now are lack of product, inflation and supply-chain interruptions, and the third one is lack of labor.”

On Amazon’s most recent earnings conference call Feb. 3, executives discussed how important it was to get orders to their customers as fast as possible — the same day in certain circumstances, and at a maximum of one or two days for Amazon Prime subscribers.

Amazon CFO Brian Olsavsky said during the call that fulfillment centers represented about 30 percent of the company’s spend over the last two years, which he said would moderate going forward. According to the company’s most recent financial statement, also from Feb. 3, total operating expenses in 2021 were $444.9 billion, $272.6 billion of which was in North America.

“We want to have capacity to have a healthy retail and FBA [fulfillment by Amazon] business” to facilitate same-day, one-day and two-day deliveries, he said. “That’s very important.”