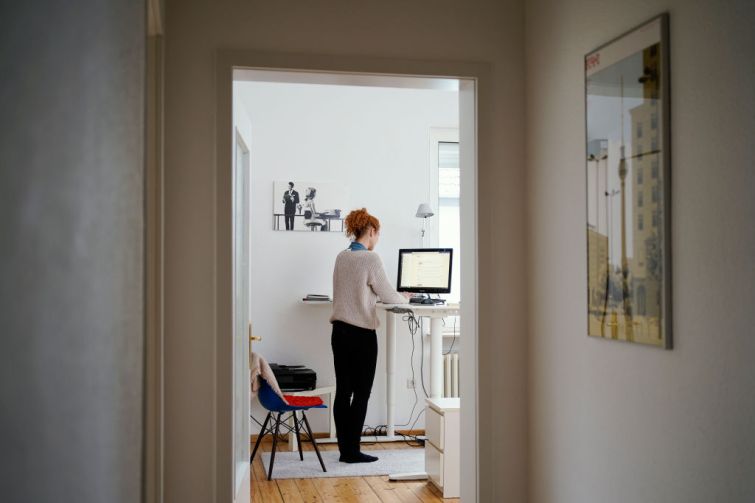 A woman is working in her apartment in front of a computer at a high desk. Photo: Uwe Anspach/dpa via Getty Images

The Federal Reserve Bank of New York’s August survey found that service employees are spending 20 percent of their working hours at home, and plan to continue that next year. Roughly 30 percent of respondents— 150 business executives in New York, northern New Jersey and Fairfield, Conn.—  log on remotely for 3.3 days a week on average, according to the survey.

“Remote work is sticking,” Richard Deitz, an economic research advisor with the Federal Reserve, said. “We’re almost at a point where firms have adjusted to a new normal, and there’s much more remote work than people even thought was possible before the pandemic.”

While the share of remote work is far lower in hospitality and retail service jobs, for obvious reasons, its commonplace among office staffers with professional, business and financial services employees spending more than half of their work hours at home, according to the survey.

Despite remote work’s popularity, the trend is far from a death sentence for New York City’s office market. Only 16 percent of service firms reduced their office footprints after adopting a hybrid model, cutting space by 5 percent on average, the survey found.

Things also looked brighter in the manufacturing industry with only 7 percent of them shrinking their office footprints by 2 percent on average.

“While more remote work has resulted in a smaller footprint on net, the reduction has not been proportional to the rise in remote work,” the survey said. “Somewhat encouragingly, as more remote workers are gradually returning to the workplace, businesses plan a slight increase in their footprints, in aggregate, in the next one to two years.”

While the report found most firms kept similar office footprints in New York, there have been some notable exceptions. Yelp closed its nearly 200,000-square-foot New York City office last month while Twitter wants to offload a full floor of its nearly 140,000-square-foot space at 245 West 17th Street. Meanwhile, both Amazon and Facebook will pare back on their expansion plans in New York City.

For workers trekking to the office, Mondays and Fridays are, unsurprisingly, the least popular days to go into the office, according to the survey, with an August report from New York City Comptroller Brad Lander finding the same pattern. New York City’s office buildings were only 34.6 percent occupied on Mondays and just 21.2 percent occupied on Fridays in the second quarter of 2022, compared to occupancy levels above 42 percent on the other days, according to Lander’s report.

About 22 percent of employees preferred to spend zero days a week in the office and 26 percent preferred to go in twice a week, though 33 percent of managers expected workers to come in three days a week, according to the comptroller’s report. Given the tight labor market, bosses might be forced to listen to their staffers, the Federal Reserve’s Deitz said.

“It’s something that workers are almost requiring as a benefit,” Deitz said. “If you’re trying to find people to fill jobs, which a lot of organizations are right now … offering remote work is going to be very beneficial.”