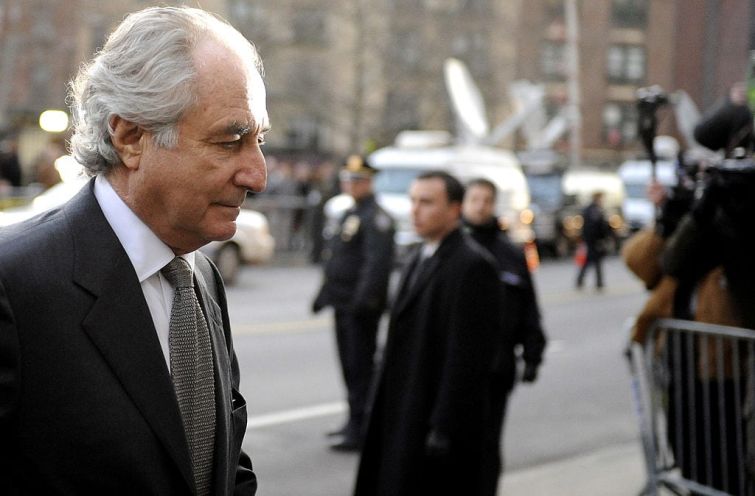 When the bad guys in “Die Hard” tried to pull off one of the greatest ripoffs in history at the Nakatomi Corporation one Christmas Eve, they were aiming for what seemed in 1988 like a dizzying sum of money: $640 million in bearer bonds.

Twenty years later, Hans Gruber would have to successfully pull off 100 such heists to capture the wealth stolen by Bernard Lawrence Madoff, who died this week.

Madoff’s name lit up news outlets the world over when his Ponzi scheme was revealed during the height of the global financial crisis. The sheer size of his con ($64.8 billion) was jaw-dropping. (Although it should be noted a lot of the losses were based on fictitious gains that his victims believed they were socking away year after year. The capital stolen was closer to $19 billion.)

The other thing that was equal parts shocking and maddening was how clearly the con could have been exposed if only someone had had the guts to say that the emperor wore no clothes — or listened to the few lonely voices saying exactly that. Harry Markopolos, a forensic accountant, realized within hours of studying Madoff’s financial statements that he was a fraud. Markopolos repeatedly reported this to the SEC and was essentially ignored. (In Malcolm Gladwell’s 2019 book, “Talking to Strangers,” he reported on the seriously intelligent investors at Renaissance Technologies who looked at Madoff’s numbers, realized that something was awry, couldn’t figure out how he was making his profits, and decided to leave a big chunk of their money with him anyway.)

There were a lot of notable real estate names who got ensnared by this villain: the Wilpon family (which owned the New York Mets) were Madoff victims, as was the late Burt Resnick, and the Rechler family; plus super brokers Brian Waterman of Newmark and Steve Siegel of CBRE were blasted by the Madoff bomb.

But, then, Madoff stole from everybody. Charities. Pensions. Steven Spielberg and Kevin Bacon. It didn’t matter to Bernie.

Our mothers taught us not to speak ill of the dead, so we’ll leave it at that.

No, he’s not going to be Bernie Madoff 2.0, but things are starting to look worrying for real estate lawyer Mitch Kossoff.

First, he can’t be found.

More than a week ago, he was hit with lawsuits from landlords trying to retrieve millions in escrow accounts that Kossoff controlled and … he’s ghosted everybody. Not just SSM Realty Group and 537 Associates, who brought the suits, but also clients and partners who have been unable to reach him.

Second, this week we learned that Manhattan DA Cyrus Vance had opened an investigation into whether he misused funds.

We’re still waiting for Kossoff to be located to find out what happens third.

It was a big week in the world of blockchain.

Legendary broker and owner, Kent Swig, started his own cryptocurrency this week with the rollout of DIGau, a digital token attached to the price of gold, which he launched with $6 billion in gold reserves with Stephen Braverman’s Dignity Gold.

Plus, blockchain is playing a growing role in landlords thinking about how to effectively manage their buildings’ emissions. Carbon trading may be the way that landlords mitigate the steep fines that are shortly going to bite, thanks to Local Law 97.

“There is a huge opportunity for NYC to establish a secondary marketplace for LL97 compliance by creating tradeable ‘tokens,’” wrote Zach Livingston, head of sales for energy data platform ClearTrace in a column for CO. “If created, it would allow building owners to purchase tokens from other buildings that have ‘overcomplied’ and become more efficient than they need to be.”

Yes, sustainability is very much on the minds of a lot of owners and tenants. As is health.

CO spoke to the Center for Active Design’s Joanna Frank about healthy buildings and she’s seen an unprecedented level of interest in making the working environment a healthy one.

“I think pre-COVID, building owners were aware of the fact that health was part of what they were doing,” but it lacked urgency until the virus made its appearance. “From our perspective, the industry has embraced big changes within months that normally take 10 years to complete.”

Some of a healthy building is tied to tenants’ peace of mind. There is still a lot of anxiety about coming back to work and how to best combat this. And then, there are things like just making the working environment more serene, peaceful, enjoyable and green, which is what companies have tried to do with living walls.

The Sphinx-like Steven Roth tried to soothe the nerves of those who are worried that work-from-home is here to stay in his annual letter to shareholders.

“The success of our businesses will continue to depend upon talented workers gathering together,” Roth said in his letter. “I guess the kitchen table has a place for some but I continue to believe the urban office is the future of work.”

This was at odds with a CoStar report that found that the demand for office would fall in the coming years.

One area that doesn’t seem much in doubt is multifamily, which has been steady since the pandemic started. Foreign investors are getting in on the action. Just last week, we learned that Madison Realty Capital loaned $146 million on two multifamily developments in Parsippany and Basking Ridge, N.J.

And we saw some unexpected (but welcome) positive news in the retail sector. Sales were up 9.4 percent in March, according to a report from the Commerce Department. And there were some interesting retail leases to report, too. Triangle Equities inked a deal for a 20,000-square-foot Aldi supermarket in Flatbush, Brooklyn. (Aldi wasn’t the only supermarket chain making moves: the Russian grocer, Tashkent Supermarket, went beyond just a lease and dropped $18 million to buy a Bensonhurst location.) And the salad chain Sweetgreen announced a new 7,665-square-foot outpost in the Google complex in Hudson Square.

It’s not just parents who are eager for their kids to get back to school. The schools are doing their part, too, including some leases to get the process going.

Enjoy the rest of your weekend — we’ll be reading about the life and work of another cryptic person with the surname Roth.