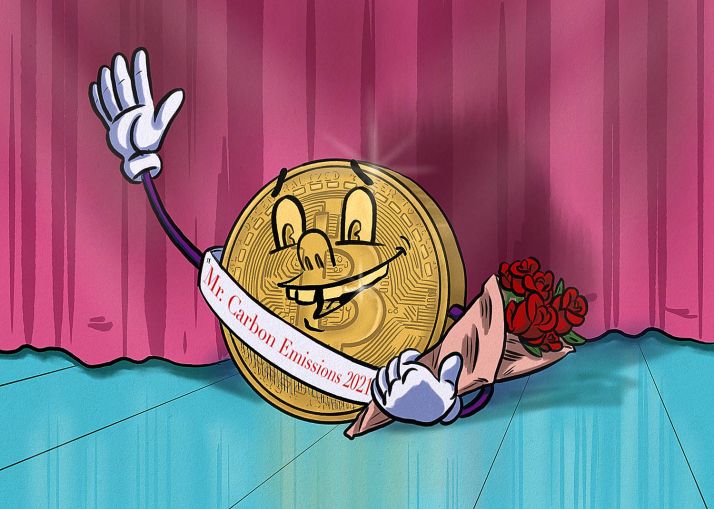 A blockchain-based carbon trading market could be a savior for New York City real estate in the wake of the city's new environmental regulations. Illustration: Spencer Alexander

Launching a blockchain-based trading system for carbon emissions — placing invisible gases in the care of the invisible hand of the market — may sound like the latest in trendy high-tech speculation, like cryptocurrency or the digital art obsession with non-fungible tokens (NFTs).

In New York City real estate circles, however, the idea isn’t seen much as a novelty anymore, but rather as a potential savior, as landlords and building owners reckon with the costs of the city’s landmark new environmental regulations.

“We’re using capitalism in a way that will decrease everybody’s carbon footprint and be kinder to mother Earth,” said John J. Gilbert III, chief operating officer and executive vice president of landlord Rudin Management Company, who’s helping to design a prototype carbon credit trading system. “Using market forces to accelerate the return on investment that owners make to improve their properties and decrease their carbon footprints is a good goal. I don’t think anybody disagrees with that. Question is, how do we do that?”

Local Law 97, passed in 2019, stipulates that most New York City buildings over 25,000 square feet need to dramatically reduce their carbon footprint, with fines starting in 2024 and increasingly strict caps being applied beginning in 2030. The Urban Green Council estimates that it may cost the real estate industry $20 billion to meet the law’s carbon reduction goals.

While that’s a hefty price tag, real estate interests are also frustrated at the ways the legislation limits their responses. Older, historic structures are held to what some see as impossible standards, and even brand-new office buildings with cutting-edge investments in sustainability will be hit with huge, multimillion-dollar fines annually because they house thousands of workers who use significant amounts of electricity all day. Gilbert believes Rudin’s portfolio alone could rack up millions of dollars in fines per year beginning in 2024.

“Business owners set to be hit by these 2024 caps don’t have a lot of tools to meet them, and some who have invested significantly in efficiency will face significant penalties with few options,” said Zachary Schechter-Steinberg, vice president of policy at the Real Estate Board of New York (REBNY).

Market advocates like Urban Green Council CEO John Mandyck believe trading carbon emission credits can solve the problems in the law, channeling fines into capital that can be invested in energy-efficiency upgrades in other buildings across the city. The group’s study on carbon markets, released last June, said the right regulations would unlock capital that could help buildings outside the scope of LL97 cut emissions, greatly speeding up the city’s green push.

“The trading market is a breakthrough policy tool for cities,” Mandyck said. “New York City has $3 trillion of insured coastal property. That’s nearly twice the GDP of Canada. It is in the enlightened self-interest of the real estate community to find a way to reduce carbon emissions.”

The idea of establishing a market for carbon credits was even written into the original law, which called for the city to publish a report on the mechanisms needed to establish such a market (the report, originally due this past January, is being finished by a panel of experts and is now expected early this summer).

“It’s a logical extension, because cap and trade is a common form of environmental management,” Mandyck said. “What we have now is cap and no trade. Adding trade is a complementary way of addressing this issue.”

But as the idea of a market, and one based on the blockchain, becomes more popular as building owners grapple with the fines they may face in 2024, there’s also a realization that setting up such a system is, in fact, even more complicated. The city and state government would need to pass new laws to enable the creation of such a market — the city’s home rule exemption may not cover the creation of a market that could be construed as a tax — and members of the environmental coalition that backed the law aren’t in favor of a market.

Such a proposed market would first create a network of data collection hubs on buildings and renewable power-generating sites. This information would then be analyzed and published on the blockchain, a powerful, peer-to-peer-distributed computer network that constantly and securely validates this vast trove of information. As Rudin’s Gilbert said, it’s a system to match real-time supply data with real-time demand.

Next, this carbon data would be turned into credits, which owners and investors could store in a digital wallet and trade, much like how investors currently swap bitcoin and other cryptocurrencies.

Once this market is set up, carbon emissions become a commodity; owners who find cheap ways to cut emissions or fall below the cap can sell their excess credits to those who can’t. Trading can also generate capital that can be used to fund projects in low- and moderate-income neighborhoods, especially environmental justice communities that have suffered from under-investment and the presence of polluting infrastructure, such as power plants and industrial sites.

Alec Saltikoff, an engineer and global head of sustainability at JPMorgan Chase, who’s designed building management systems, is now helping to design a blockchain system in collaboration with Rudin’s Gilbert; Brookfield Renewable Partners (owned in large part by Brookfield Asset Management); KPMG; and ClearTrace, a startup focused on carbon accounting. Saltikoff said that “the age of carbon tax is on us.” Blockchain is an elegant and practical solution to the larger problem of creating both the level of trust and efficiency needed to swap carbon credits.

“To do the standard calculation for every single building in a large portfolio is impractical,” Saltikoff said. “That kind of carbon accounting simply doesn’t exist.”

While cap-and-trade systems have been successfully leveraged for different markets, and have helped tackle environmental goals like decreasing acid rain or lowering power plant emissions, there isn’t much of a track record around implementing something as complex as the carbon trading scheme being envisioned as an extension of LL97.

Tokyo set up a similar market in 2010, but it’s still in its infancy. The city’s regulations and carbon caps are relatively easy for owners to meet via small investments in energy efficiency, said Mandyck, so there hasn’t been much of a need to trade credits. Just a few dozen trades have been made thus far, in a market that will only cover 5,000 buildings in total. That’s because the program was designed with self-reduction measures in mind, said Takuya Ozawa, who works for the Bureau of Environment in the Tokyo Metropolitan government; caps will likely be tightened, but new buildings probably won’t be added to the market.

Any New York City carbon market would need to be set up nearly instantaneously to have any impact on 2024 fines, and would need to handle a relatively high volume, since roughly 50,000 buildings are impacted by LL97.

“It doesn’t surprise me that companies are trying to get ahead of the curve to understand how carbon trading could physically work,” Mandyck said. “But we’re still sorting out the policy mechanics of, ‘Will it work?’ and ‘Can it work?’ And, once those questions are answered, there will be technical questions. You’re going to need sophisticated accounting systems to keep track of this.”

REBNY’s Schechter-Steinberg believes the city has already taken too long to release the report on mechanisms for the market and start leaping over the legislative hurdles to get a trading system set up before fines are levied.

“For an issue that’s supposed to be so important, you haven’t seen much progress; at this point, you’ve kicked the can down to the next administration,” he said. “”There’s interest and optimism it could work, but where are we? When we need new solutions, it’s increasingly hard to find them.”

It’s not a guarantee that the new laws needed to open such a market could be passed. Carlos Garcia, energy planner for the NYC Environmental Justice Alliance, which supported the passage of LL97, said his organization believes “any kind of carbon trading or pricing mechanism is bad for environmental justice communities,” as has been highlighted by criticism of California’s cap-and-trade system. He sees the rush to establish a market as a frenzied attempt by the industry to avoid steep fines and energy-efficiency investments.

“Do we feel bad for the multibillion-dollar industry that knowingly, for the last few decades, has been one of the largest consumers of energy?” he said. “No, 25,000-square-foot buildings aren’t mom-and-pop. Our interest and priority isn’t their continued profitability.”

The Urban Green Council’s Mandyck agrees that, historically, these cap-and-trade systems haven’t been good for low-income communities, which have tended to become vehicles to prop up outdated, heavily polluting plants.

“The skepticism, I get it,” he said. “Right now, we’re trying to turn that paradigm on its ear.”