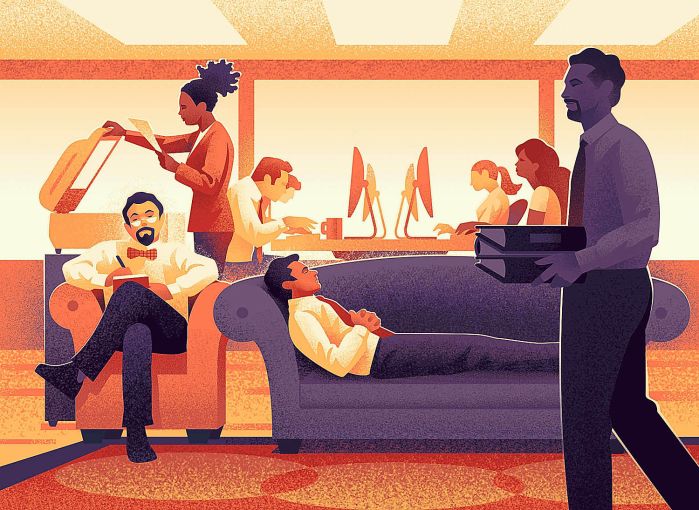 Is it over yet?

With spring in the air and a vaccine rollout moving faster than people imagined, the end of the COVID-19 pandemic seems nigh. Certainly, there are masks to be worn and variants to track, but, despite that, the return to office life seems closer than previously imagined.

Or, more likely, it’s a mix of both. The return to in-office poses a new set of challenges for those who have been quarantining at home, after an already challenging year, said Alyssa Petersel, founder and CEO of therapist-matching platform MyWellbeing. “A lot of mental health dynamics come up when someone’s in a period of abrupt change,” Petersel said. “With returning to in-person, there are some things that will probably be really exciting for people, and there are other things that will be really intimidating.”

The feelings about the return to work are also tied up with more generalized post-COVID anxiety, and readjusting to the social and work obligations that were paused for so long, according to numerous experts. It’s the little things: wearing heels for the first time in a year, making small talk at the coffee machine, navigating the frenetic pace and social cues so common during a pre-COVID day.

And it’s the big picture: employees have created new routines tailored to their own lifestyles and on their own terms, and now they have to reset all over again.

In addition to the general anxiety about readjusting to the world as we knew it, there is also a necessary adjustment to everything that’s changed. It is likely that many employees will go back to the office before the threat of COVID is entirely eradicated, if it ever will be. So, people will continue to navigate the new and shifting restrictions, protections and social codes imposed by COVID. Only that will be extended to professional environments as well.

With that in mind, employers are considering how to welcome employees back to the office, and what kind of workplace strategy to adopt in the short and long term.

“Every company right now has different versions of the same return-to-work philosophy,” said Jamie Hodari, CEO and founder of workspace management company Industrious. “We want as much employee autonomy and empowerment as possible, before it starts to really impinge on company culture, or productivity, or workplace strategy.”

Because the office has been so central to the organization of some people’s lives, the cultural and social effects of its displacement are going to be far reaching, and that will only become more apparent as those changes solidify when office employees return to work.

For employers, there are at least three areas to consider as employees begin making the transition: managing the health and social anxieties of the initial return to work, communicating expectations during the calibration period, and incorporating the broader landscape of shifting office culture over the long term.

In the beginning, employees will be dealing with a lot of change. Companies have evolved considerably over the last year, so employees are entering a landscape different from the one they left last March. Companies have hired new employees, shifted teams, and instituted new performance metrics or goals — some specific to COVID, some not. Usually, the social aspects of getting used to new colleagues, or management, or a new position would be gradual, but now it will be very abrupt, said Petersel.

“Some of the things that will be top of mind for people will be a little bit of social scanning of who they’re prioritizing, making time for and building relationships, all within a context of — if they’ve been quarantining at home — not necessarily having as much social energy or capacity that they once had,” she said.

In some ways, it will be like the first day of school, with an extra twist of pandemic-related awkwardness. As one employee who started a new job during COVID jokingly tweeted: “Meeting people who I’ve talked to on zoom for 8 months but haven’t met in real life and doing a double take is my bread + butter.”

“Sociologically, everyone is like a deer in the headlights,” said Nancy Slotnick, a life coach who advises companies on corporate wellness programs, and has recently begun consulting on “post-pandemic stress disorder” as she calls it. “We have [faced] a lot of loss as a country, as a society, as a globe through the pandemic; we need to be acknowledging the loss of the old life.”

While Slotnick advised addressing the loss and grief directly, Petersel suggested taking a more indirect approach instead, saying companies should offer opportunities for employees to interact naturally so as to connect — such as through a company-sponsored pottery class.

While some of the changes will only apply to the initial awkwardness of seeing old or new colleagues for the first time, and will wane after an adjustment period, some changes will be more permanent.

Companies will likely experiment with the new workplace models, and then make updates to their plans as time allows for more feedback: whether that’s managing time in the office by day or by team, organizing local regional company events, instituting hot-desking, offering satellite locations, setting variable expectations for how often employees need to be in the office, or many other options.

“Every company is going to have to get to a new normal, and they’re not going to know from the outset what that is,” Slotnick said. “The process of getting to that is going to be very rocky.”

Not everyone thinks it has to be such a difficult problem. Joel McIntyre is the CEO of internet service startup GiGstreem and manages a team of about 20 employees in New York. Over the last year, GiGstreem made sure employees had access to support and were maintaining an appropriate work/life balance, especially during the lockdowns last spring, McIntyre said. “We were aggressive about making sure employees were unplugging.”

He’s not concerned about the transition to in-person work, at which point, they’ll adopt a hybrid model. “As long as we’re smart about giving people flexibility, we’ll allow people to evolve back into it on their own, as opposed to mandating a corporate philosophy,” McIntyre said.

However, the flipside of flexibility is uncertainty, and the new flexibility afforded to employees may affect other life choices that employees are making. Many people will be rethinking where they want to live, and what they’re looking for in employment, with different considerations than they were a year ago — all while a new normal hasn’t yet settled into place, said Shannon Gunnip, a licensed mental health counselor and a former recruiter for tech companies. Many of her clients are not considering geography at all when thinking about work, and that’s opened the door to a lot of options.

“The main thing that I hear people struggling with is that there’s so much unknown still, even though we’re a year and several months into this pandemic; there’s so much uncertainty about the future as it pertains to our professional lives,” Gunnip said.

And with new autonomy comes new decision-making that employees didn’t have to think about before. “A lot of people have not had to take that deliberate of an approach to their work life,” Hodari said. “I think it’ll be a good thing, but it’ll be new for a lot of people and it’ll require them to do a little bit of introspection, and really think about what motivates them and what they want.”

Companies, too, will need to consider that. What are the reasons that some employees will want to come back to the office? Many have learned they can be productive at home, but what they crave is the social and collaborative environment of the office, said Hodari.

“And I don’t mean foosball,” he added. “There’s this presumption that interaction at work means foosball or whatever. And I think a lot of people like work; they like sitting with a group of people and working through a thorny problem together. That is a mode of social interaction as well. That’s like being on a sports team, part of what bonds you is you’re working toward an outcome together.”

Traditionally, though, offices have long been designed for productivity above all else, not necessarily for collaborative work. “How do we need to alter the workplace in order to accommodate the moment at hand and the type of work people are going to be doing there? The two major alterations are: more space for interaction, and then more space for privacy,” Hodari said.

It’s been quite well-documented that open-floor plans, which were popular in pre-COVID, millennial-heavy workplaces, are not necessarily the most conducive to either collaboration or productivity. Even pre-COVID, it could be difficult to do focused work during office hours because of the interruption-strewn cacophony of open-floor design, said Hodari. “I think it will be almost unbearable, after a year of being able to do heads-down work when I needed, to be in an environment where I’m constantly beset by distractions.”

Another helpful way to think about the shift in office culture is to consider the differences between high school and college, said Hodari. While high school students have a regimented schedule with a select group of people, colleges foster community-wide values and culture, even though many students will never meet each other, and, when they do, it’ll be based on their own choices and affinities.

However office-using companies decide to traverse this new set of uncertainties, the important thing is that expectations and boundaries are communicated, and, in some cases, that employees feel included in the feedback loop that will decide the new normal, said Petersel.

“Sometimes it matters a bit less what the answer is for the given company,” she said, “and a bit more that the company is communicating it clearly.”