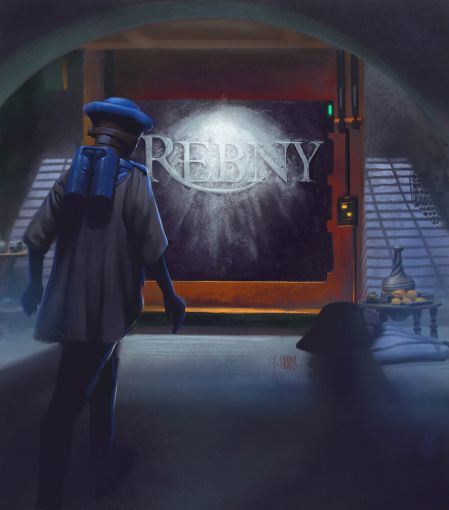 Real estate might be frozen in carbonite but REBNY is going to be unthawed. Illustration by Fred Harper.

The chill of the January air reminds the New York real estate-trained mind of one thing: the New York Hilton Hotel, and the Real Estate Board of New York’s annual gala.

Alas, the pandemic put it on ice this month (REBNY is planning on reviving it later in the year), but at Commercial Observer, we didn’t think this meant that REBNY wasn’t a topic worthy of coverage.

The outlook for 2020 was a lot less rosy than previous years. The wind shifted strongly against real estate in 2019, and REBNY was busy strategizing how to deal with a less-than-friendly class of politicians in Albany and City Hall. The last thing it needed was a global pandemic that would lend a body blow to office, retail and hospitality.

And, yet, REBNY has been regrouping.

We spoke to the new chairman of REBNY, the legendary Douglas Durst, about his outlook. We examined how the organization is planning on future-proofing itself; how REBNY has dealt with previous plagues (1918); how the most recent class of REBNY fellows are faring in this less-than-ideal environment; the costs that were going to be hitting landlords in the coming years, pandemic or not; what REBNY was hoping to get out of the Biden administration; and the mayoral candidates who would be most attractive to the REBNY set.

We also looked back on the tenure of the organization’s outgoing chairman Bill Rudin, as well as the unsung real estate legacy of former NYC mayor David Dinkins, who passed away in November.

Finally, we looked at the future of the schmooze, which was always the biggest reason that the REBNY galas were so much fun. And while REBNY plans to revive the gala later in 2021, we took the opportunity to partner with REBNY in putting on a virtual show of support for the industry, which included a jaw-dropping array of real estate and political luminaries: Marc Holliday, Larry Silverstein, Mary Ann Tighe, Tony Malkin, MaryAnne Gilmartin, Letitia James, Ben Brown, Vicki Been, and on and on.

Yes, office demand is way, way down (61 percent in December from the previous December, according to VTS). But there is optimism in the air. (REBNY announced a survey that found increased confidence in the future, thanks to the introduction of the coronavirus vaccine.)

And if you’re in the movie/TV business, there’s no need to think about the future. The present is pretty good. It seems like there’s a veritable tapeworm for studio space, in New York and Los Angeles.

Exhibit (a): Apple TV+ just announced the opening of a 90,000-square-foot soundstage at Kaufman Astoria Studios in Queens.

Exhibit (c): Last week, Hackman also bought a stake in Raleigh Studios in Hollywood. (No word yet on how much the deal cost.)

In general, there was some pretty good leasing activity in the last week. AWH, the hospitality investor, re-signed at 1040 Avenue of the Americas; Brooklyn Navy Yard signed two leases at Building 127: one for product design and branding firm Smart Design, and another for theatrical scenery maker Daedalus Design & Production; and we even saw an out-of-towner make its way to the Big Apple: Beam Suntory, which owns such brands as Jim Beam and Canadian Club whiskey, is moving its headquarters from Chicago to 11 Madison Avenue.

Does this make up for the fact that apparently Condé Nast is looking to get out of its One World Trade Center lease and move to (checks notes) New Jersey? Maybe not, but it was a good week, nonetheless.

Did we mention that indoor dining is returning to New York just in time for Valentine’s Day? Or that Related Companies just got a $229 million CMBS loan to acquire Phillips Point in West Palm Beach? Take that, haters!