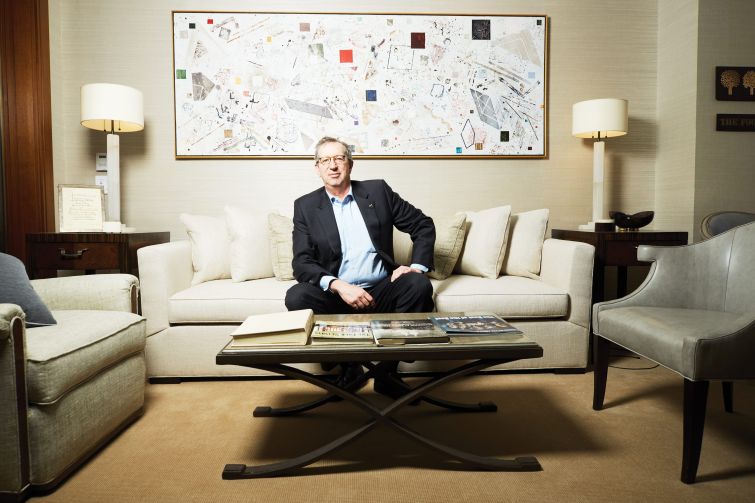 Bill Rudin’s three-year chairmanship of the Real Estate Board of New York, which ended on Dec. 31 when Douglas Durst took over the position, saw no shortage of accomplishments. Rudin spearheaded initiatives that increased diversity within New York real estate, guided the organization through COVID-19, and championed the creation of cutting-edge real estate technology.

Given the trying times New York commercial real estate has experienced over the past three years, the great advantage Rudin, co-chairman and CEO of Rudin Management Company, brought to REBNY had as much to do with who he is as what he did.

“This was probably among the most tumultuous times in REBNY’s history,” said Mary Ann Tighe, CEO of the tri-state region for CBRE and REBNY’s chair from 2010 through 2012.

Outside of the obvious disruptions from COVID-19, Tighe also noted the marked increase in “negativity about any changes to the built environment,” and how the commercial real estate industry was often cast as a villain by the city’s progressive political forces.

“It’s ironic that would happen with a man whose natural disposition is toward harmony and congeniality,” Tighe said. “For his ability to bring people together in a period of such tumult, we were lucky to have Bill.”

“He was a fabulous leader during challenging times,” echoed Leslie Himmel, founder and co-managing partner at Himmel + Meringoff Properties and co-chair of REBNY’s Economic Development Committee. “I’ve sat on REBNY’s Executive Committee since around 2003, and I’ve watched many chairmen and one chairwoman run the executive committee meetings and present and develop policy. What I thought was outstanding leadership on his part was that he united many different voices into a unified strategy. I felt that was outstanding.”

Long before marchers took to the street this past summer to protest the murder of George Floyd, diversity was top of mind for Rudin.

“Increasing diversity is a priority for the real estate industry and we are expanding our efforts on multiple fronts,” Rudin said at REBNY’s annual banquet in 2018.

According to REBNY, its diversity committee, created under Rudin, “launched innovative recruitment strategies to build and nurture a new pipeline of diverse talent for the industry that did not previously exist.”

“He was instrumental in adding women to the executive committee and making sure that REBNY was becoming more diversified in terms of giving job opportunities to individuals and just having a more diverse space,” said Himmel.

This support for diversity took many forms. Rudin’s REBNY, along with the City University of New York and the social impact platform Project Destined, launched a Virtual Internship Program in May that provided 100 CUNY students from diverse backgrounds, who had lost in-person internships due to COVID, with paid five-week internships in commercial real estate.

“The diversity of New York City is one of our city’s greatest strengths and REBNY is focused on efforts to better leverage this great asset within the real estate industry,” Rudin said at the time. “With programs like this, our industry is providing a more inclusive pathway for careers in real estate, which is critical for the long-term success of our city and the development of our next generation of leaders.”

“These are extraordinary internships,” said James Whelan, REBNY’s president. “These are intensive internships that really get into the granularity of making real estate deals. They culminate in a contest at the end, where the interns have to work in teams. It’s remarkable how much they learn to get them versed in real estate. What we’re doing is seeding the ground for the future of real estate in New York City.”

“When Bill became chair, we got heavily involved [in the Building Skills program],” said Whelan. “We took over the lion’s share of the fundraising and retooled the staff, and the results really show. In 2016, the program made about 42 placements. This past year, it made 365 placements. A hundred percent of those placements were city residents, and 97 percent were persons of color. It’s been a great stepping stone for getting people involved in the construction industry and on a path toward a career.”

According to REBNY, Rudin oversaw “a record period of hiring and promoting of diverse team members.”

REBNY’s members and executives can feel the difference.

“If you walk the halls of REBNY today, it feels like the city as we know it,” said Tighe. “And by that, I mean both gender and racial diversity, and just openness to people from all throughout the city, all the different boroughs, etc. It’s not just about people who own the major commercial skyscrapers or developers of the most expensive condos. It is the full range of people who are connected to the full range of real estate in New York.”

Diversity was just one area that Rudin’s tenacity as chairman impacted. He also fought to make New York a welcoming home for the tech industry, and, while Amazon’s beachhead in Long Island City went up in smoke, his tenure saw Google and Facebook sign significant deals here; plus, Amazon made less-publicized real estate deals like the $1.4 billion purchase of the former Lord & Taylor flagship for a 2,000-person office.

He also launched the PropTech Challenge, a hackathon that encouraged tech developers to innovate for the CRE industry. Winners have included Seeing Green, a collection of tenant apps with features intended to increase occupant engagement; StructionSite, which simplifies the tracking of the construction process; and HomeSpace 360, which allows property marketers to create 3D virtual tours on a smartphone.

Whelan points out that Rudin, via Rudin Management, has been a tech pioneer in commercial real estate for decades.

“To say they’ve been early leaders in this would be an understatement,” said Whelan. “Going back to the 1990s, Bill repositioned 55 Broad Street in Lower Manhattan as one of the first tech hubs in New York City. They were one of the first to identify that as a growing industry in New York. Then, they were incredibly innovative in setting up a company called Nantum, which provides real-time data to building owners, in terms of what’s going on in their buildings and how they should adjust internal mechanisms like their HVAC.”

In other areas, Rudin led continued opposition to the Small Business Jobs Survival Act (SBJSA), a long-simmering City Council bill that would essentially serve as commercial rent control. Rudin’s opposition included bringing more than 100 REBNY members to a 2018 council meeting to make their objections loudly known. He also oversaw the syndication of the Residential Listing Service, streamlining the distribution of REBNY’s listing data.

Of course, all of these initiatives took a backseat to COVID-19. Rudin worked with the city to establish health and safety guidelines and identify spaces for surge hospitals, and mobilized an effort to place a voluntary moratorium on evictions.

“With COVID, REBNY was giving clear directions early on about things like opening and closing, which was very helpful,” said Himmel. “I’ve watched Bill speak many times, and he gave a very clear vision as to what you should do for social distancing and for temperature taking, and how you need to have clear communication with your tenants.”

While much has been made of eviction moratoriums, Whelan points out that REBNY volunteered this before it was required.

“Back in March, it was actually REBNY that got out there before the city and state, pledging a voluntary eviction moratorium for 90 days,” Whelan said. “Bill and the other owners realized the unique nature of this crisis and the impact it would have on people. So, he helped corral a group of 30 of the larger owners in New York City to pledge voluntarily to place a moratorium on evictions.”

Public officials, too, turned to Rudin for advice and influence amid the pandemic. Gov. Andrew Cuomo appointed him to the state’s reopening advisory board, and Mayor Bill de Blasio tapped him for the city’s Construction and Real Estate Sector Advisory Council. Under Rudin’s aegis, REBNY was able to score key victories. The J-51 tax abatement program for renovations was extended and the deadline was pushed back for filing real property income taxes and expenses. And REBNY secured a statewide electronic notarization platform.

In the end, it’s these efforts at confronting COVID and ones aimed at boosting diversity in the CRE industry that will define Rudin’s tenure as REBNY chairman for many.

“The face Bill projects is exactly what the real estate board should project, which is as a champion for the city — someone who gives his all to that which will strengthen the city, and someone who makes it a big tent,” Tighe said. “It’s that inclusiveness that I think of as Bill’s big contribution at a moment when the industry really needed it.”