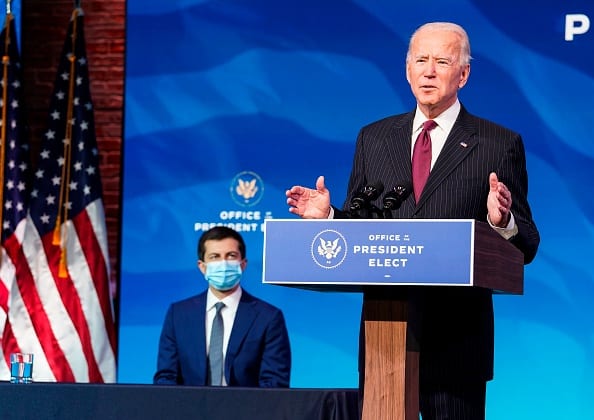 When Joe Biden was inaugurated on the steps of the U.S. Capitol shortly before noon on Jan. 20, many New Yorkers felt their chest cavities loosen and jaws unclench, while hoping the federal spigot unfastens and spritzes earmarks once again.

President Biden kept his remarks from the dais devoid of malarkey, promising the nation would overcome the coronavirus pandemic, rebuild the middle class, and end systemic racism.

“We will press forward with speed and urgency, for we have much to do in this winter of peril and possibility. Much to repair. Much to restore. Much to heal. Much to build. And much to gain,” Biden said. “Few periods in our nation’s history have been more challenging or difficult than the one we’re in now.”

He was not exaggerating. More than 400,000 Americans have died from a pandemic that has spurred widespread economic devastation, boarded up offices and small businesses, and forced many families to remain tethered to their homes for months at a time.

The country faces enormous challenges, yet most New Yorkers are optimistic about the future — 54 percent of New York state voters believe the Biden presidency will be good for New York, in a Siena College poll released Jan. 19. (Only 23 percent said the new administration will have a negative impact on the state.) And another 49 percent have confidence that a Democratic-controlled Senate, led by Brooklyn’s Chuck Schumer, will be good for the state.

“We’re in a historically difficult position and it’s going to require extraordinary leadership on the federal level,” Jim Whelan, president of the Real Estate Board of New York, told Commercial Observer shortly before the inauguration. “Within the first 100 days, I think progress will be made and Schumer will be the key point person. Over the weekend, he was making very clear the leadership role he is going to be taking on.”

Biden isn’t wasting time getting started. On his first day in office, the president signed 17 executive actions, including measures to re-enter the Paris climate accord; rejoin the World Health Organization; and dissolve former President Trump’s travel ban on several predominantly Muslim nations. The Biden administration also introduced an immigration plan to Congress that would provide a pathway for citizenship for the nation’s 11 million undocumented immigrants within eight years.

Friendlier federal immigration policies could have the effect of reversing the tepid flow of global migrants to New York City. Only 34,000 immigrants moved to the city in 2019, a 45 percent decline from 2016, when 62,000 arrived, according to a Brookings Institution analysis of census data. With immigrants making up 45 percent of the city’s workforce before the pandemic, and 70,000 people leaving New York last year, the city could risk labor shortages and stagnation.

“We lost thousands of people last year and that’s a death sentence for any city,” Eliot Spitzer, owner of real estate firm Spitzer Enterprises and a former governor of New York, said. “If we do not open the city and get people back into the city, the city will not survive as an economic or political organism.”

Biden’s toughest challenges will be inoculating the public and getting people back to work. The president has set a goal of vaccinating 100 million Americans in his first 100 days and passing a $1.9 trillion COVID relief bill that includes individual $1,400 stimulus payments, rental assistance, enhanced unemployment benefits, and $350 billion in aid for state and local governments.

The money is far from guaranteed and congressional Republicans are already questioning its size. On Jan. 19, New York Gov. Andrew Cuomo hedged against an aid package that doesn’t meet the state’s substantial needs by drawing up two budget proposals: one assuming only $6 billion in federal aid and another accounting for the state’s full $15 billion request.

Cuomo and other state leaders want Congress to prioritize eliminating a $10,000 cap on federal deductions for any state and local taxes (SALT) paid, a tax provision that affects many homeowners in New York and its suburbs. Cuomo said repealing the law would regain the state $12.3 billion.

The SALT repeal has less of a chance of passage than rental relief. Real estate leaders support Biden’s plan for $25 billion in rental assistance for low and middle-income tenants who lost jobs during the pandemic, as well as an eviction moratorium on federally-guaranteed mortgages through September.

“We need rental assistance on both the residential and commercial side, not only to help out tenants but owners, too,” Whelan said. “If tenants can’t pay their rent, then owners can’t pay obligations like property taxes and mortgages.”

An infrastructure plan that was so elusive over the past four years might finally come together now that Democrats control both the House and Senate. For New York, that could mean restarting the process on congestion pricing, funding for the MTA and other transit networks, and the completion of the Gateway rail project with a new rail tunnel connecting Penn Station and New Jersey — one of Schumer’s top priorities.

“As people get vaccinated and there’s hope, I imagine we’ll be talking about these projects again,” Carlo Scissura, president of the New York Building Congress, a trade association that promotes the construction industry, said. “We’re optimistic about the future of the city and that these projects will be built.”

All presidents deal with unexpected and unwieldy crises, and Biden is starting out with a plate drowning in them. The unpredictability of the pandemic may continue to scramble lofty goals.

“We’re not yet seeing the consequences of the pandemic,” Kenneth Fisher, a real estate attorney at Cozen O’Connor, said. “For the half a million people who lost their jobs and neighborhoods that have streets full of vacant storefronts, it is dismal. We’re in a limbo period.”