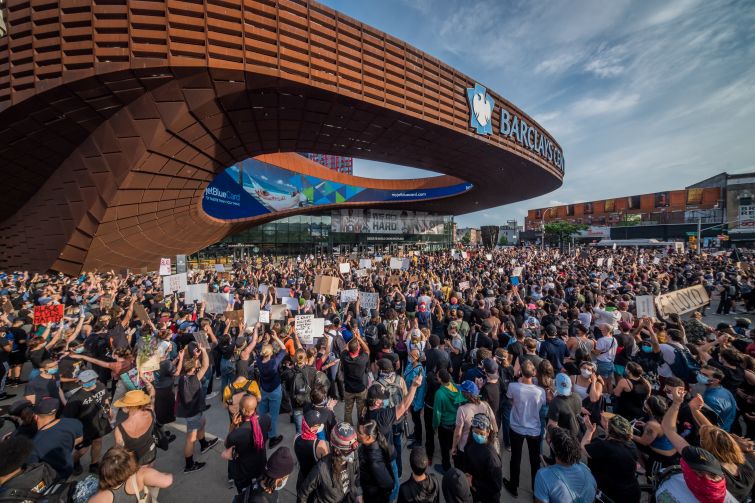 One unfortunate thing that we’ve noticed about 2020 is that every week feels more wrenching and emotionally draining than the last. We thought a global pandemic was bad… and quarantine was bad… and unemployment was bad… but America reached a breaking point last week when protests over the death of George Floyd led to clashes with the police. (CO had its own reflections on these protests and what it has meant for real estate and our nation as a whole.)

New York had been poised to begin its Phase I reopening when this happened and the unrest sparked looting that hit everything from the city’s most luxe to its poorest corridors, with landlords responding by boarding up their stores.

Mayor de Blasio responded by issuing a curfew which will be in effect until the early morning of the planned June 8 reopening. So far, we have yet to hear of any changes to this plan.

L.A., which had been slowly reopening retail, also saw a lot of its stores boarded up to guard against unrest.

For weeks we’ve been sniffing out deals that signaled some sort of change in the direction of the economy and the marketplace. Some signs were good (like, say, TikTok taking nearly a quarter million square feet at One Five One); others had promise but were coupled with some clouds (like Facebook still in talks to take space at Farley Post Office, despite announcing that they were letting employees work from home a lot more in the future.)

Well, Friday did offer some unexpected and unassailable good news: The unemployment rate dropped in May! 2.5 million jobs were added!

It’s true that 2.5 million jobs is a lot less than what the economy had been hemorrhaging every single week for quite some time, and many of these jobs were described by Evercore ISI’s Ernie Tedeschi as the “low hanging fruit” of employers probably calling workers back to their jobs. Still, we’ll take it.

One thing about the positive employment numbers and the approaching Phase I is it focused the mind on what the aftermath of COVID-19 will be.

There will no doubt be a best case scenario, a worst case and a middle-of-the-road case. We examined what we should expect: How could it get worse? What does a realistic recovery look like? And what will happen if we play our cards perfectly?

And while the protests scrambled so much, preparations are being made for a post-COVID future. For example, the City Council introduced a bill opening up streets to outdoor dining.

Retailers weren’t the only ones who were twitchy this week thanks to the civic unrest. WeWork, which has remained stubbornly open and staffed throughout the pandemic, finally sent staff home.

One of whom is not coming back to WeWork is co-founder Miguel McKelvey who announced he was parting ways with the company, but we don’t know much beyond that.

It was another cruddy week for WeWork in other ways, too; investors announced a suit against the company for its botched IPO.

While the clash between police and protesters was more graphic in Washington D.C., deals still materialized in and around the nation’s capital this week. Acento Real Estate Partners nabbed a $114 million loan to buy three multifamily properties of 774 units in Baltimore and Grosvenor Americas picked up two office buildings for $85 million from Equity Commonwealth in Georgetown.

In L.A. Omninet Capital purchased two office campuses of about 400,000 square feet in a $78 million deal from Colony Capital.

ESRT proved that, despite the pandemic, they were still inking deals, doing more than 100,000 square feet of leasing in New York and their suburban portfolio.

And there was even some retail activity in Washington Heights and the Upper West Side, with deals signed for 312 Food Corp., a grocer, an Israeli grocery delivery service called Shookit and a salon called Hair Lounge.