Officials: looters ‘hijacked’ peaceful protests and destroyed hundreds of businesses throughout the region 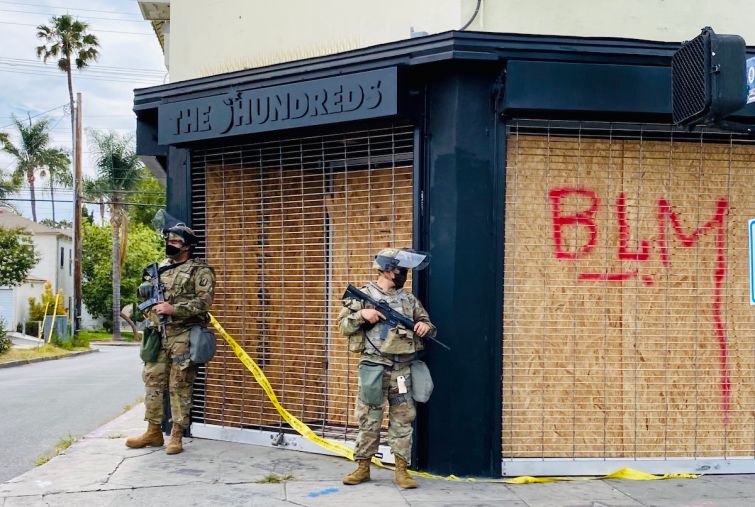 Dozens of stores along Melrose Avenue have been boarded up. photo: Gregory Cornfield/Commercial Observer 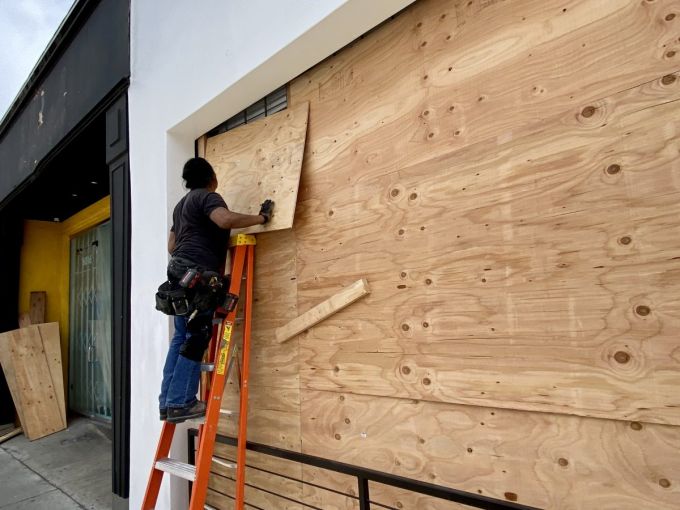 The store at 8020 Melrose Avenue is boarded up on June 2. photo: Gregory Cornfield/Commercial Observer 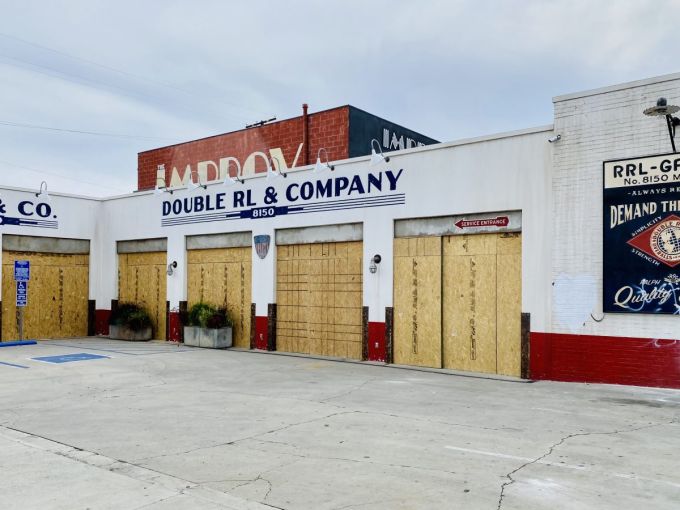 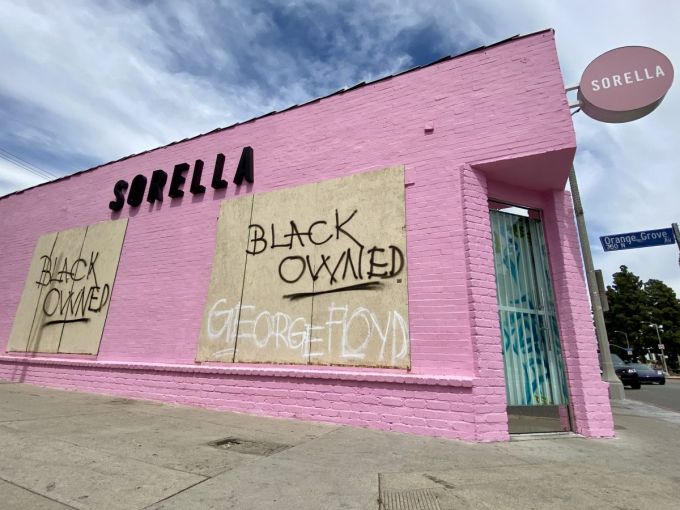 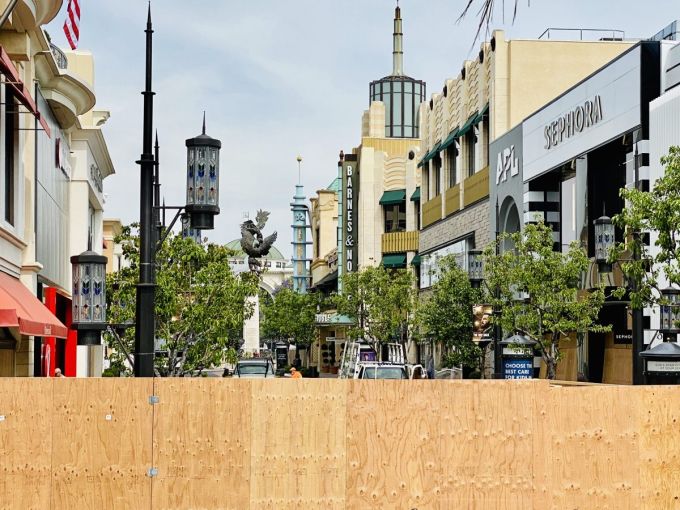 A plank wall was put up this week to separate workers rebuilding destruction at The Grove. Apple, Nordstrom, Michael Kors, Sephora, and Ray Bans were targeted by looters. photo: Gregory Cornfield/Commercial Observer 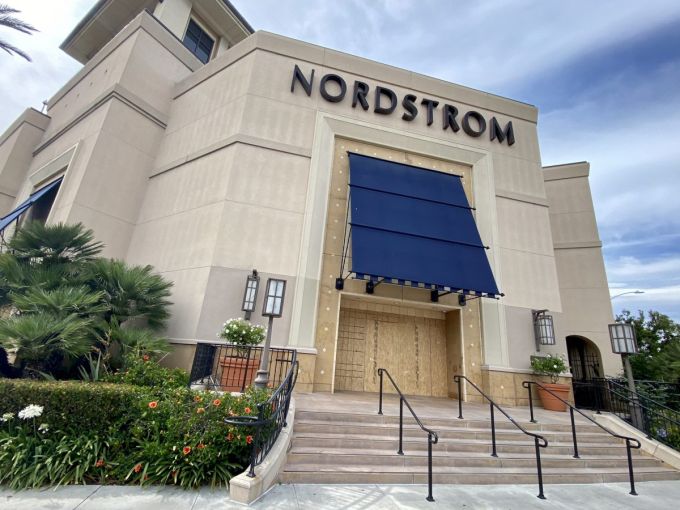 The Nordstrom store at The Grove was a big target for looters over the weekend. photo: Gregory Cornfield/Commercial Observer 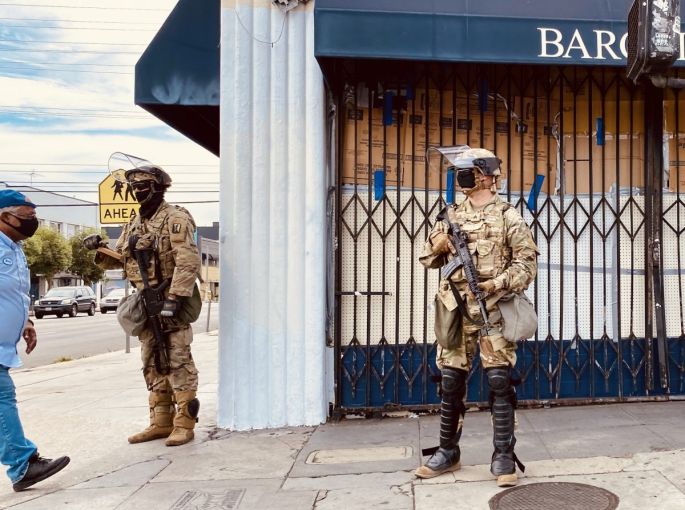 Bargain Fair at Beverly Boulevard and Fairfax Avenue is boarded up with National Guardsmen on June 2. photo: Gregory Cornfield/Commercial Observer 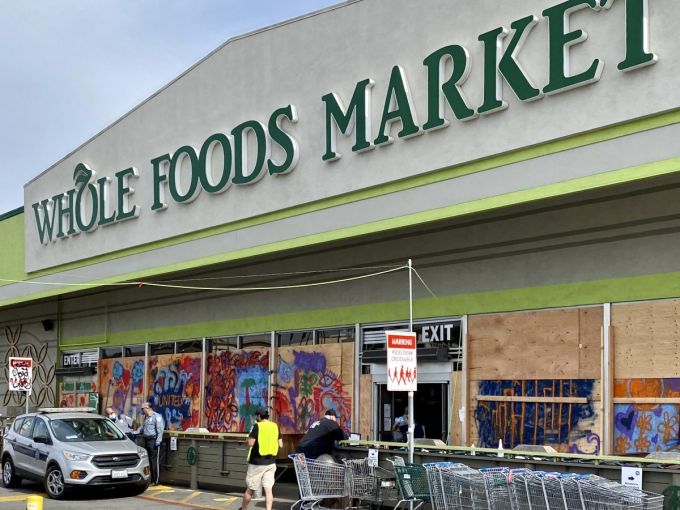 The Whole Foods on Third, across from the Original Farmers Market and The Grove, was looted over the weekend. photo: Gregory Cornfield/Commercial Observer 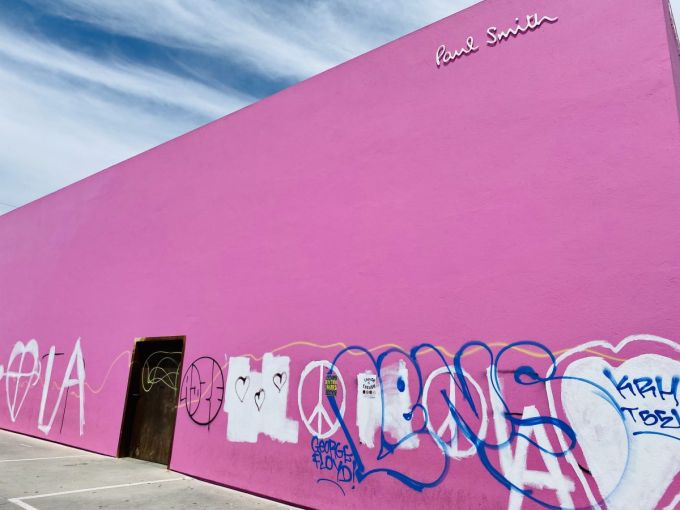 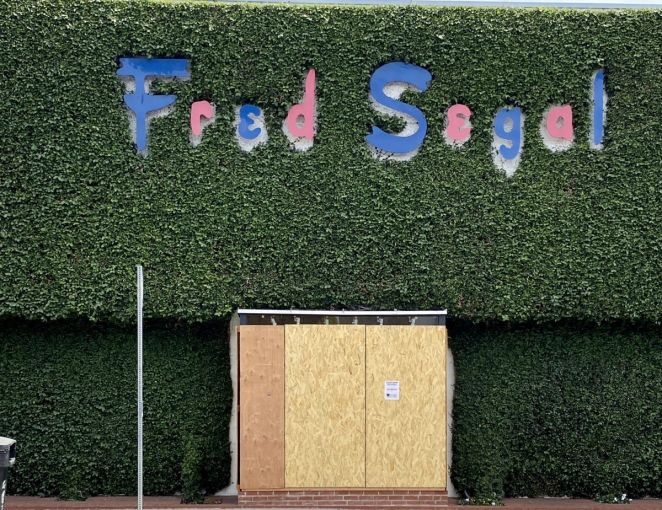 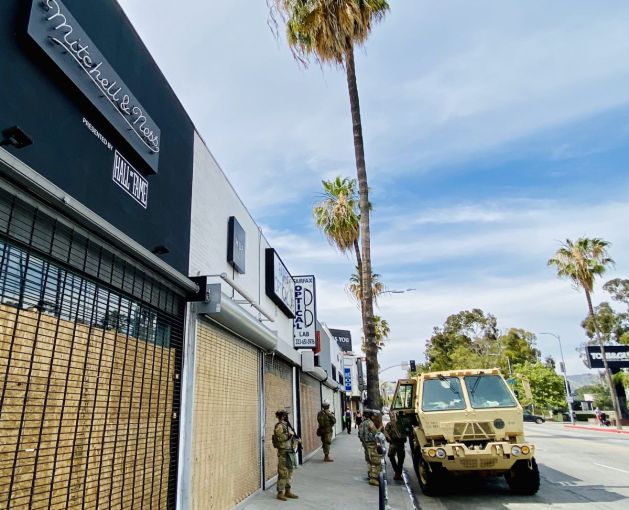 Mitchell & Ness and a row of other retailers on Fairfax have been boarded up. photo: Gregory Cornfield/Commercial Observer 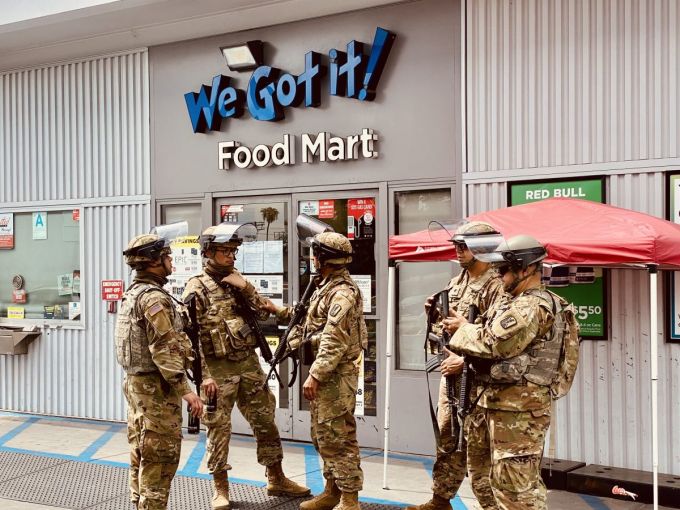 National Guardsmen congregate at a gas station at Melrose and Fairfax across from Fairfax High School. photo: Gregory Cornfield/Commercial Observer 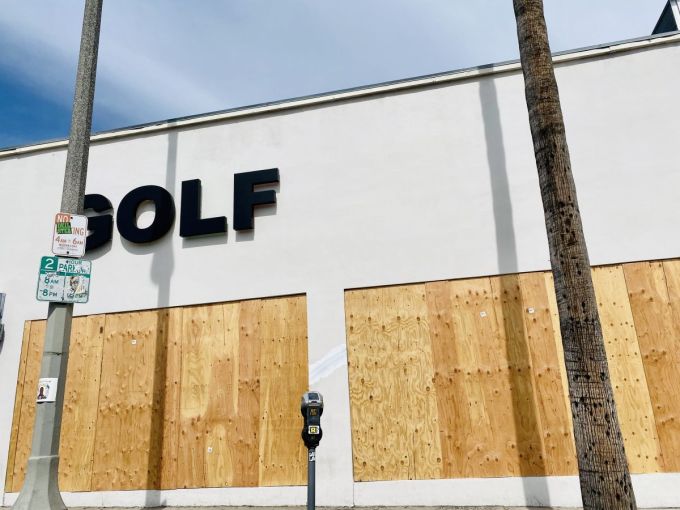 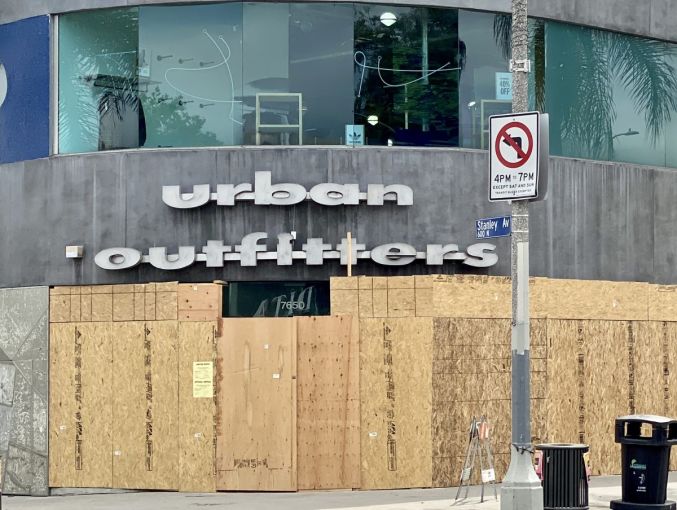 Urban Outfitters at 7650 Melrose Avenue has been boarded up. photo: Gregory Cornfield/Commercial Observer 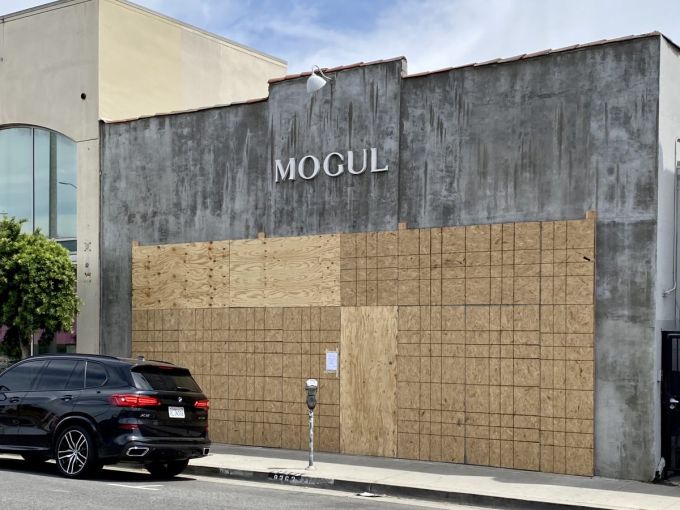 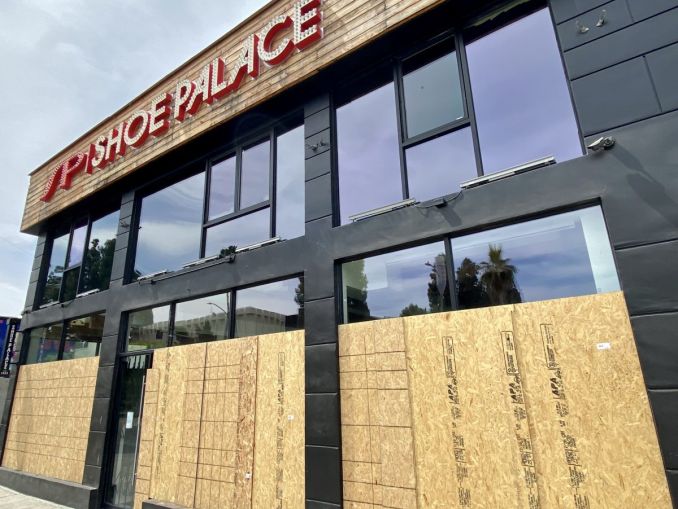 Shoe Palace at 7725 Melrose Avenue has been boarded up. photo: Gregory Cornfield/Commercial Observer 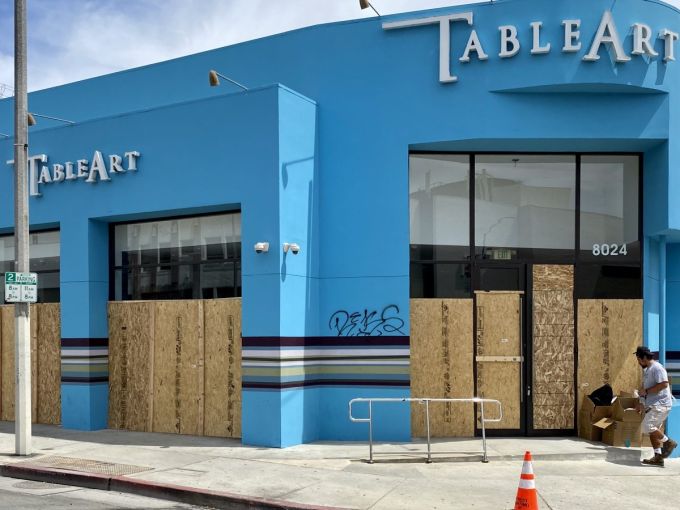 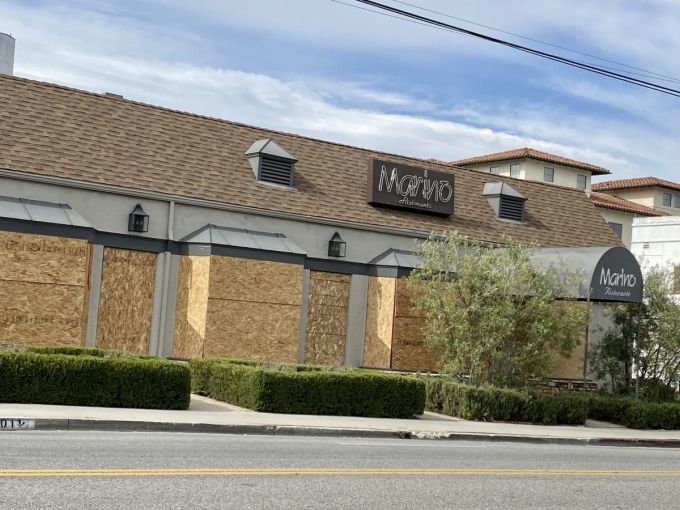 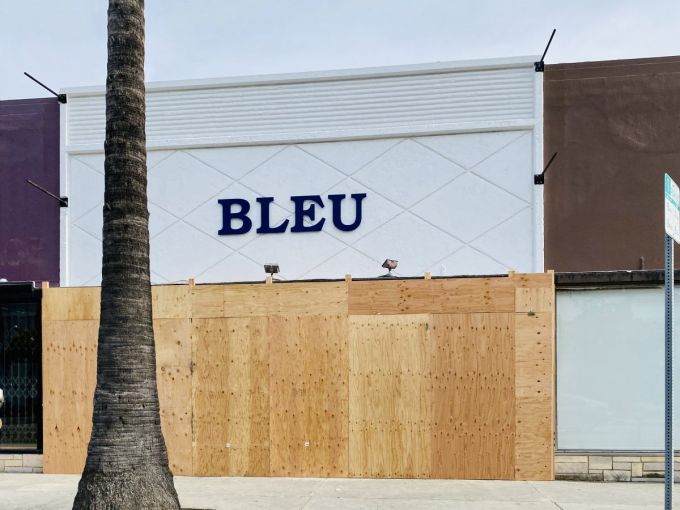 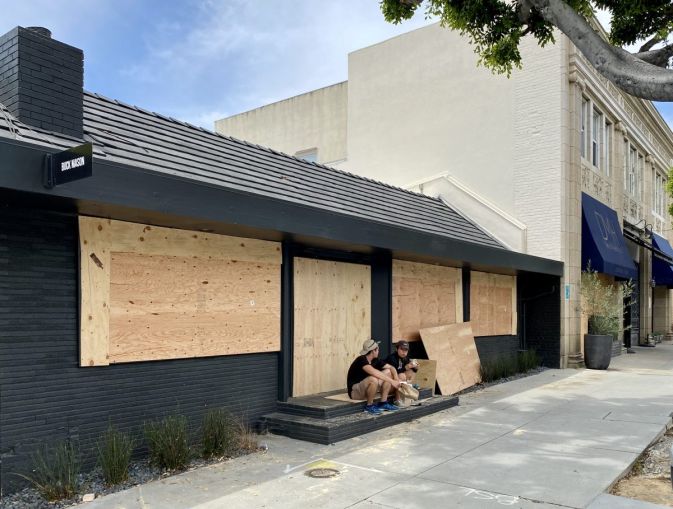 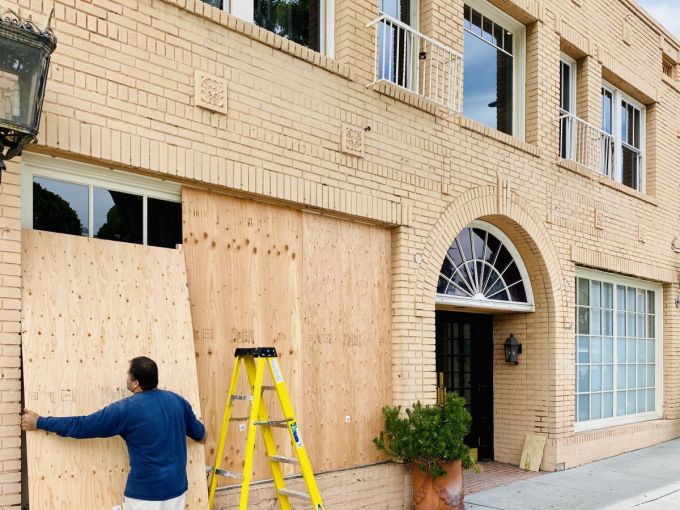 The store at 119 Larchmont is boarded up Tuesday. No damage was done over the weekend — it was just precautionary, the worker said. photo: Gregory Cornfield/Commercial Observer 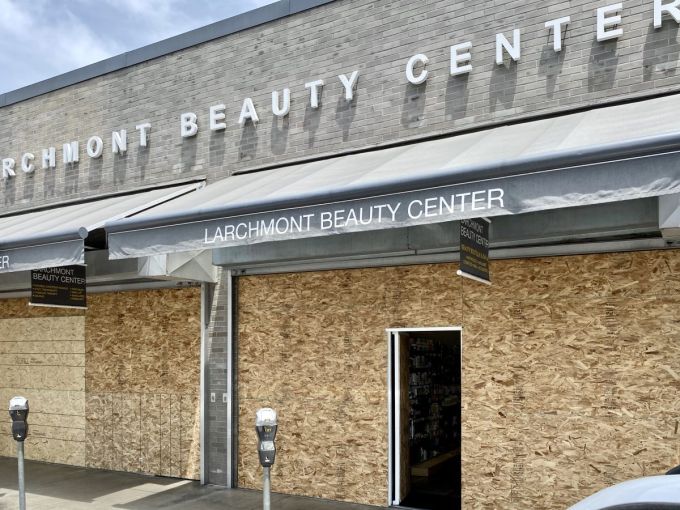 Landlords and retailers in Southern California continued cleaning destruction left by looters over the weekend, and boarded up their storefronts to prepare for the potential of more rioting.

Protests and demonstrations — shadowed by the National Guard, LAPD, and officers with the County Sheriff’s Department — continued this week, from Downtown Los Angeles to the neighborhoods on the coast, including in front of Mayor Eric Garcetti’s home in Hancock Park. Officials also announced more curfews throughout the county today.

Many of those districts — including Santa Monica, the San Fernando Valley, Downtown L.A., and Hollywood — are assessing property damage and theft suffered over the last few days. Among the hard hit sections was the shopping retail strips on Melrose Avenue; city officials estimate 88 stores were damaged or destroyed. Along with the adjoining Fairfax District, the area is one of the more unique and iconic retail districts in L.A., lined with modern clothing and retail options.

Councilman Gil Cedillo delineated between the looters and the peaceful protestors, the latter of which has the council’s support. He said looters are “exploiting this moment and this circumstance, and they’re not just stealing products from local stores. But they’re stealing jobs.”

“Those 88 buildings that were destroyed on Melrose reflect jobs of working men and women; they reflect jobs that immigrants do late at night when no one else sees them, cleaning those buildings; they reflect retail jobs that provide training so that people who work there can move up in those industries,” he said.

Sources familiar with ownership at Double RL Company, or RRL, at 8150 Melrose Avenue, told Commercial Observer that the clothing store was completely looted. Representatives declined to comment. Other videos show looters breaking into Dr. Martens on Melrose with about 20 people looking to enter a shattered opening. An Adidas store, the Reloaded L.A. clothing store, and boutique salon WAX, were also hit by looters or set on fire on Melrose Avenue, according to media reports.

The Fairfax area is also home to the iconic Farmers Market at Third and Fairfax, and the well-known, high-end shopping district that accompanies it, called The Grove, which is owned by Caruso Affiliated. Viral videos from security, and from witnesses posted on social media show looters flowing out of broken-glass doors at the Apple and Nordstrom stores with boxes and bags of merchandise. In the same area, a looter set fire to the LAPD kiosk. Windows were also smashed at the Michael Kors, Sephora, and Ray Bans stores, among others. Across the street from the Grove shopping district, looters ransacked the large Whole Foods grocery store.

Councilman Paul Koretz, who represents the Fairfax District, said he has been criticized by activist groups and protestors for expressing concern over the “devastation that we’ve seen in our own city in the aftermath” of the killing of George Floyd.

“People said, ‘Why do you care, we’re just harming property?’” Koretz said Tuesday at a city council meeting. “[But] we’re not just destroying property, we’re destroying peoples’ businesses and peoples’ lives at the same time. Mom-and-pop businesses in my district — many owned by immigrants, many owned by black and brown individuals — have all been lost. … Jobs are held by folks from across the city in my district, jobs that were hanging by a thread, and now probably won’t return. I would argue that it’s not just property. We’ve devastated a lot of lives.”

Similar scenes have been reported throughout the region. City Council President Nury Martinez said there were peaceful protests in her district in Van Nuys. But they “turned into something violent, and quite frankly, really disturbing,” as strip malls were set on fire and outlets like Kovac’s Care Pharmacy were completely looted.

Councilman Marqueece Harris-Dawson said it is often the objective of anarchists and looters to delegitimize society, “so they can say, ‘Look, they care more about windows than they do about human life.’” He said “every looter, every petty criminal should be hunted down, and charged, and jailed,” but their actions don’t compare to the loss of life and the systemic injustices to African-Americans, and that it is not an excuse to take the city’s attention away from George Floyd, “who was killed by four people.”

“It took them three days to arrest one of them,” he said. “The city of L.A. arrested 500 people Friday night. Minnesota can’t figure out how to arrest three people, who were on film.”

Cedillo also said the most egregious part about mass looting is that it steals attention away from the cause for George Floyd, and “away from the righteous cause of addressing violence against black men in this nation and police brutality.”