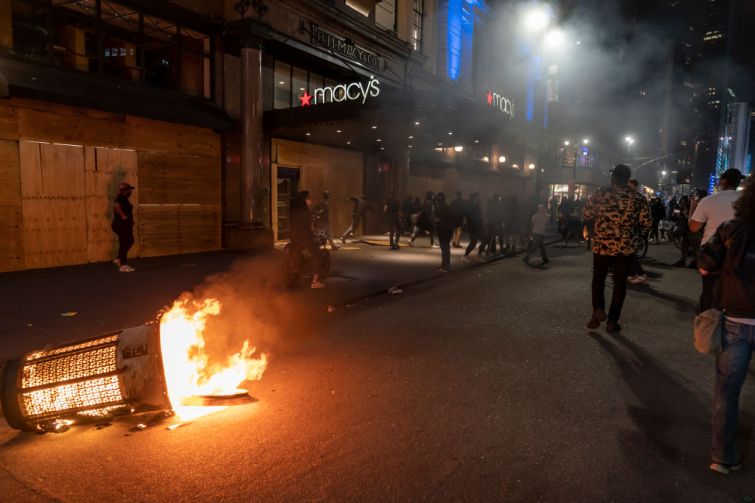 Mayor Bill de Blasio has instituted an 8 p.m. to 5 a.m. curfew for New York City from today through Sunday, June 7, after the city was roiled by a third day of looting amid protests against police brutality.

The curfew was moved up from last night’s 11 p.m. curfew after it failed to deter looting, which was concentrated on Monday night in Midtown, Herald Square and Union Square. The robberies marked an expansion of the looting that began over the weekend in Manhattan, where stores primarily in Soho and Greenwich Village were broken into, cleared of merchandise, and vandalized, as Commercial Observer reported.

The curfew unveiled this week, the first in New York City since 1943, will add additional restrictions for New Yorkers who have been under stay-at-home orders since mid-March in order to curb the spread of the coronavirus pandemic. It’s a drastic measure, considering that even at the height of the New York City’s outbreak, when hundreds of people were dying every day of the virus, the de Blasio administration chose not to impose explicit restrictions on New Yorkers’ movements. But after several days of property damage, the Mayor pulled the trigger on a citywide curfew, against the backdrop of an unresolved pandemic and amid the ongoing protests.

Last night, looters broke into the famed Macy’s in Herald Square, tore the boards off of the Bergdorf Goodman flagship on Fifth Avenue, and ransacked a FedEx store, ripping open people’s packages.

Tens of stores were affected along Broadway, Fifth Avenue and Sixth Avenue, including Dolce & Gabbana, LV, Moncler, Camper, Dior, Chanel, Diesel, Supreme, and Lululemon, according to a reporter on the scene. A Nike store at 20th Street and Fifth Avenue was ransacked, a Cohen’s Optical at 14th Street and Sixth was wiped clean of merchandise, and the Microsoft store on Fifth Avenue.

In many cases, there were no cops present during the looting, despite the prior warning, though by the end of night, over 700 people were arrested.

Gov. Andrew Cuomo criticized de Blasio’s response to the widespread looting Monday night, and called for even more law enforcement. “The NYPD and the mayor did not do their job last night,” Cuomo said in a press briefing Tuesday. “You have 38,000 NYPD people… use 38,000 people and protect property. Use the police.”

Cuomo also said that he offered to deploy the National Guard but de Blasio declined, and although he has the option to go over de Blasio, that would only cause more chaos. “I don’t think we’re at that point,” Cuomo said.

The protests, part of a wave of national outrage following the death of George Floyd at the hands of a Minneapolis police officer, are a call for police accountability and an end to police brutality against the black community.

The looting has largely been attributed to fringe groups of young adults and teenagers, utilizing the protests as cover for their illegal activities, as well as more organized groups of thieves who have been canvassing stores for looting. “It’s giving a bad name to us people who are out here trying to do the right thing,” one protester told the New York Times.

Over the weekend, 100 stores were looted in Soho alone, according to the NYPD, as cited in the New York Post. (A spokesperson for the NYPD said they did not have a count of looted stores at this time.) In response, de Blasio instituted an 11 p.m. curfew Monday night, and deployed 8,000 police officers, double the amount of the nights prior.

In New York, the protests have been met with a significant police presence and police have clashed with protesters, with over 2,000 New Yorkers arrested since Friday night, when the protests began.