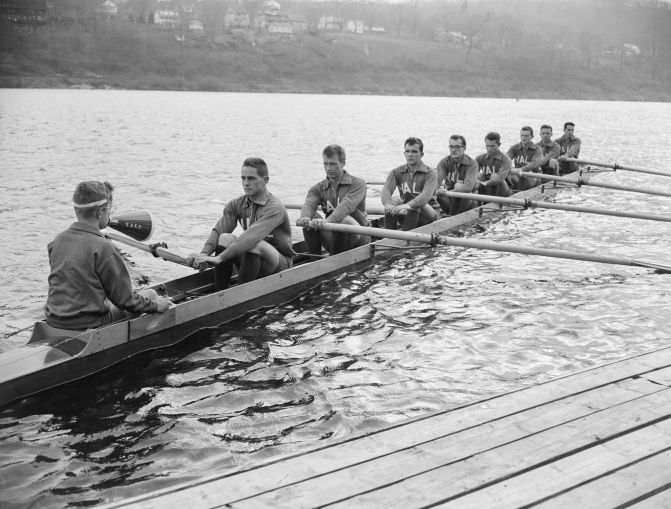 1949: Eli crew season begins...Yale Wet is rowing shells today in formal opening of outdoor rowing season, and shown above is the way the varsity crew manned the sweeps in trial spin. Getty Images

In 1864, as the Civil War raged and entered its fourth blood-soaked year, Harvard and Yale undergraduates nevertheless put boats in Lake Quinsigamond and had their young oarsmen compete against each other in their annual rowing race. (Yale won.)

There’s a similar ability to disassociate and look beyond the immediate calamity happening in the world of business and real estate. (We Americans, after all, are a forward-looking people.)

To wit, we saw the first monster lease of the coronavirus era signed this week when TikTok, the video sharing app, took nearly a quarter of a million square feet at the Durst Organization’s One Five One, previously known as Four Times Square, and Conde Nast’s old haunt. (Last week we also learned of another monster deal, Facebook taking 740,000 square feet, still hovering over Farley Post Office despite rumors that Facebook would bail.)

But wait, there were indeed other six-figure leases that apparently had been been cleared for landing:

Mitsubishi International Corporation renewed the 120,000 square feet they had at Durst’s 655 Third Avenue.

While SL Green was no doubt still smarting from the deal that has gone south between them and the Chetrit Group over the Daily News Building (they’re currently enmeshed in lawsuits), they too had reason to be happy: They closed on the $168 million sale of their retail condominium at 609 Fifth Avenue to an affiliate of Reuben Brothers.

And this activity was not strictly a New York-only phenomenon. Microsoft signed a monster lease for 400,000 square feet at Boston Properties’ Two Freedom Square in Reston, Va., a deal so significant that Gov. Ralph Northam announced it at a press conference.

The world of financing even saw a $100 million-plus loan, too, namely the $133 million in construction financing ACORE provided to Legion Investment Group for their new Upper East Side condominium.

“There will be such a demand for social interaction, such a demand for contact” after the crisis, predicted ESRT’s Tony Malkin on a Commercial Observer Power Briefing this week. It would seem tenants and borrowers are taking him at his word.

It wasn’t just TikTok deals and $133 million financings. Starwood Capital Group defaulted on a $254 million bond on the Tel Aviv Stock Exchange on a mall portfolio, raising questions on the fate of a single-borrower CMBS deal issued in 2018.

A survey from the Kung Group found that a majority of startups are planning on shrinking their office footprint.

And the situation remains grim for small businesses. In response, Mayor de Blasio signed a package of relief bills this week aimed at these businesses which capped third party fees on delivery apps, extended the waiver of sidewalk cafe fees, and prohibited landlords from going after tenants’ personal assets if their businesses were mandated to close.

On the apartment front, renters struggling from lost income due to the economic shutdown are feeling some of the pressure relieved. The state government approved a bill that would provide up to $100 million worth of rent relief in the form of vouchers that will go to New Yorkers earning less than 80 percent of the area’s median income both now and before the pandemic struck in March.

Like we were all collectively some Joad family distant relations, can easterners see salvation in California?

The return to normalcy continued apace in the Golden State. California reached the third stage in reopening their economy and in-store shopping returned to Los Angeles! And deals are being made. Omninet Capital picked up two office campuses totalling 400,000 square feet of space for a combined $78 million from Colony.

Makes the advancement of Senate Bill 939, which would force landlords to renegotiate deals with small business owners affected by COVID-19 and allow them to break leases, seem like small fry. (Actually, if passed, that would kinda be a big deal. Lawyers CO knows are crying, “Unconstitutional!”)