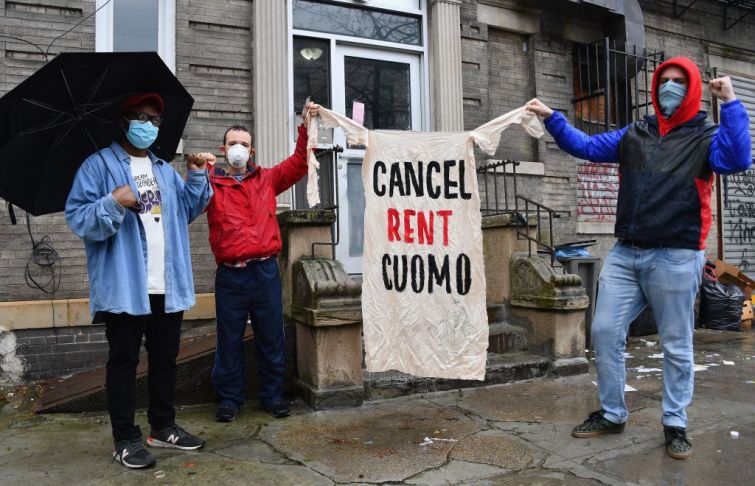 Sen. Gianaris' rent cancellation bill has been tabled in favor of a $100 million rent voucher program for tenants who have lost income during the pandemic. Photo by ANGELA WEISS/AFP via Getty Images

Both chambers of the New York State Legislature passed a bill last night that would provide up to $100 million worth of rent relief to cash-strapped tenants who lost income because of the coronavirus pandemic.

The program, administered by the state Department of Housing and Community Renewal,  will offer rent vouchers to New Yorkers earning less than 80 percent of the area median income both now and before the pandemic struck in March. (Eighty percent AMI is $63,680 for a single person and $90,960 for a family of four.) The vouchers are funded by $100 million from the federal CARES Act that was allotted to the state. Much like the federal Section 8 voucher program, the subsidy will be paid directly to the landlord.

Tenants who apply must meet the income threshold, spend more than 30 percent of their monthly income on rent, and be able to document lost income since March 7. Income includes “all wages, tips, overtime, salary, recurring gifts, returns  on  investments,  welfare assistance, social security payments, child support payments, unemployment benefits” and any other government benefits meant to replace lost income or rental payments, according to the legislation.

The amount of the voucher would be calculated to cover “the gap between [a tenant’s] pre-COVID rent burden and their new rent burden” up to 125 percent of the federally-mandated fair market rent. The federal Department of Housing and Urban Development determines fair market rent on a county and city-wide basis. For example, fair market rent for a studio in the New York metro area is $1,714.

The bill replaces Sen. Michael Gianaris’ rent and mortgage cancellation bill, which would waive rent for residential and commercial tenants affected by the pandemic and partially forgive mortgage payments for landlords who lose rent from tenants during the same period.

Many legislators voting yesterday acknowledged that the voucher bill was not enough to cover rent shortfalls for hundreds of thousands of New York City tenants, but felt that it was better than nothing.

“My heart is breaking,” said Assemblymember Crystal Peoples-Stokes, who represents Buffalo. “I know it’s not enough, but it is what we have today.”

Several members of the Assembly strongly opposed the rent voucher bill, arguing that Assembly Speaker Carl Heastie had fast-tracked the legislation and skipped over the Assembly Housing Committee entirely because the committee wouldn’t have approved the proposal. Brooklyn Assemblyman Charles Barron called the move “a slap in the face to democracy.”

Some took issue with the lack of tenant protections and the rent burden requirements in the bill. Assemblywoman Linda Rosenthal, who represents the Upper West Side, said that the bill “bails out landlords and does not guarantee that they cannot evict their tenants.”

Lower East Side Assemblymember Harvey Epstein pointed out that the program wouldn’t help people who were spending less than 30 percent of their income on rent before the coronavirus struck New York.

“We could do so much more for the tenants of New York,” said Epstein. “I’m not sure if it matters if they were rent burdened before the crisis. The question is today, are they rent burdened? How are we assisting the most vulnerable people who have lost all income? There are many New Yorkers who don’t have access to unemployment benefits for a variety of reasons. Many New Yorkers who are struggling every single day. And we’re telling them that if they weren’t rent-burdened before, we won’t assist them.”