The state’s Senate Judiciary Committee advanced a bill on Friday that would allow small businesses — like cafes, restaurants and bars — to renegotiate and modify lease deals if they have been impacted by shelter-in-place orders and economic shutdowns. 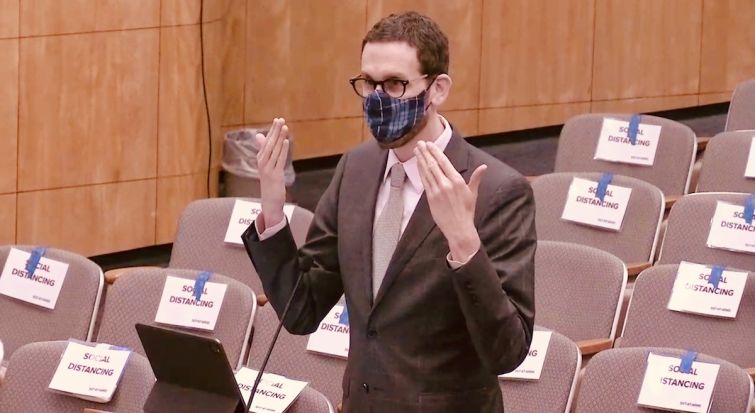 "The choice is not between full rent and reduced rent. The choice is between reduced rent and no rent.” Sen. Scott Wiener argues for Senate Bill 939 at Friday's Senate Judiciary Committee hearing. photo: senate.ca.gov

Commercial landlords and property owners across California may need to get a lot of Wite-Out ready.

The state’s Senate Judiciary Committee advanced a bill on Friday that would allow small businesses — like cafes, restaurants and bars — to renegotiate and modify lease deals if they have been impacted by shelter-in-place orders and economic shutdowns. If an agreement isn’t reached after 30 days of negotiations, the tenant can break the lease with no penalty.

Landlord advocates have been mobilizing in opposition, arguing that the proposal is unconstitutional, and that it would “upend” leases around the state. Justin Thompson, a real estate partner with Nixon Peabody, told Commercial Observer that it was illuminating to see so many industry organizations come out “so vehemently opposed” in a short period of time. He heard from industry groups all week, and said the general consensus in the commercial real estate community is that the bill is “overly broad, overreaching, and it is a bit of a sledgehammer” when something less blunt would do.

“Everyone recognizes that restaurant tenants and smaller non-franchise retail tenants in particular really are in dire straits and in need of assistance,” Thompson said. “But I think the implications of SB 939 are really laying it at the feet of landlords, and putting them in the situation where, even if they have tenants that were going to make it through this, they might now rethink that and leave the landlord in the lurch.”

Senate Bill 939 was initially introduced as a statewide moratorium that would prohibit landlords from evicting businesses and nonprofits that can’t pay rent during the coronavirus emergency. But it was amended last week to also give smaller businesses the ability to trigger renegotiations if they have lost more than 40 percent of their revenue due to emergency government restrictions, and if they will be operating with stricter capacity limits due to continued social distancing mandates.

If the parties do not reach a “mutually satisfactory agreement” within 30 days after the landlord received the negotiation notice, then the tenant can terminate the lease without liability for future rent, fees, or costs that otherwise would have been due under the lease.

One of the bill’s authors, Sen. Scott Wiener, said during the hearing Friday that the bill is focused on the hospitality sector, which has been most devastated. The renegotiation provision will not apply to publicly owned companies or their businesses. The law would be in effect until the end of 2021, or two months after the state of emergency ends, whichever is later.

Wiener argued that the state faces “a mass extinction event of small businesses and nonprofits in every neighborhood,” and the “very real prospect” of them permanently closing due to prolonged mandates that reduce capacity, “chopping in half someone’s business.”

“This would change the face of our state permanently,” he said. “It would severely hamper our ability to recover.”

Matthew Hargrove, senior VP of government relations for the California Business Properties Association (CBPA), wrote a letter to the committee saying SB 939 “could cause a financial collapse.”

“This postponement of rents will cause … landlord’s financials to crumble and lead to lenders putting out cash calls to lower loan balance and foreclose when landlords cannot pay, and cripple landlords’ abilities to keep their properties open and maintained,” the letter read.

CBPA also argued it is unconstitutional for a state to pass a law impairing the obligation to contracts, and warned it would “allow one party to unilaterally abrogate real estate leasing contracts.”

Thompson added that the bill risks harming foundational landlord-tenant relationships throughout the state.

“Everything we do, especially in real estate, runs on relationships,” he said. “I think that when you tip the balance so far in favor of the tenant the way that [SB 939] does, it certainly strikes at the heart of the idea that we are in this together. … This does not make it feel like landlords and tenants are in this together anymore.”

The law firm Buchalter, which has offices in L.A., Orange County, San Francisco and around the West Coast, warned clients that the bill sets a “terrible precedent” that will “upend all your leases.”

“The rights afforded under SB 939 would effectively rewrite every commercial lease in California” other than publicly traded companies, the firm said. It “negates all current commercial leases to the benefit of one business over another.”

Instead, Buchalter said the state should provide assistance to tenants impacted by the stay-at-home orders, and pointed to the “more reasonable” renter relief proposals introduced by Senate Pro Tem Toni Atkins

Wiener said they are sensitive to the needs of property owners in terms of their loan obligations.

“It’s a complicated issue. We don’t want these property owners to default on their loans,” he said. “But we also need to be clear: these landlords aren’t going to be able to collect the pre-COVID rents from these restaurants, bars and cafes. That is not the reality. The choice is not between full rent and reduced rent. The choice is between reduced rent and no rent.”

He argued current leases negotiated before the pandemic reflect a “different financial reality.”

“Restaurants, bars, and cafes are expected, frankly, to just suck it up, and magically come up with the high rent that was obtained in pre-COVID circumstances,” he said. “This provision is not for leases to be terminated. It is to provide space and incentive to actually get the renegotiation done. … We know that overwhelmingly, these businesses don’t want to close down. This is their life’s work, they want to find a way to survive.”

“It’s not in anyone’s interest where the landlord gets no revenue,” he said. “Sadly, on the other hand, all too many commercial landlords are refusing to renegotiate; are insisting that the pre-COVID, unrealistic rent be paid; are invoking lease-rent escalators; are imposing late fees on backrent. That is happening all over the state.”

During a press conference Thursday, Roberta Economidis, a partner with GE Law Group hospitality law practice, said that in order to survive, “hospitality-related businesses need long-term rent relief, not simply a deferral of high rents now that will become an insurmountable debt later.”

Governor Gavin Newsom already gave local governments authority to halt commercial evictions, and some cities like San Francisco and Los Angeles quickly did so. But SB 939 would cover all California businesses and nonprofits from eviction, whether their local jurisdictions have acted to do so or not.

SB 939 will be heard in the Senate Appropriations Committee in June.