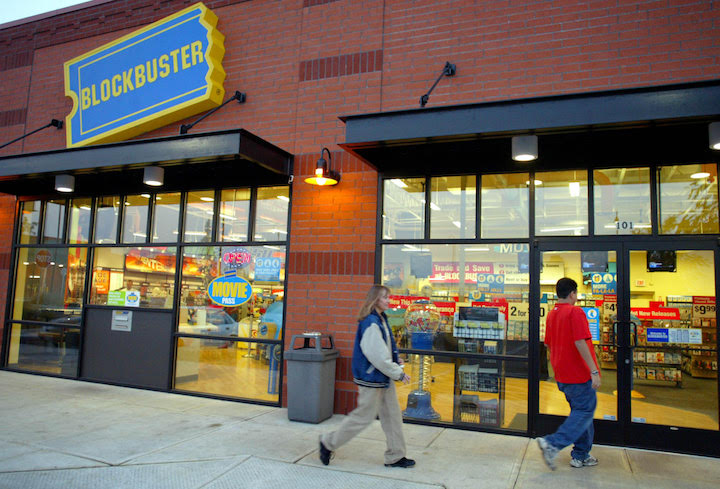 The coronavirus has laid waste to many, many retailers over the course of its short existence. Everybody from Le Pain Quotidien to True Religion to Dean & Deluca have been laying off workers and turning to bankruptcy protections — and that’s not even mentioning the companies that have yet to pull the trigger, but probably will (JCPenny, AMC, Neiman Marcus … the list goes on and on). So we were surprised that one retailer that seemed relatively healthy was . . .

That comes with a couple of qualifications. Since the height of its powers in 2004, when it could claim some 9,000 stores worldwide, Blockbuster has been reduced in force to a single store in Bend, Oregon. And it sounds as if that shop exists as much as a kitschy piece of nostalgia than something that services the entertainment needs of its clientele. But even amid a global pandemic, it’s still offering curbside service and its landlord doesn’t seem especially eager for them to go anywhere. That was one retail success story we did not see coming.

Aside from that, it was another grim week consisting of horrific new highs in the death toll (by Thursday afternoon the number reached 33,460 — falling just short of the number of Americans killed in the Korean War — one of whom happened to be titan of real estate, Stanley Chera, and harrowing news for many parts of the American economy.

First, the retail numbers for February — before the full impact of the pandemic was truly felt — were as bad as we’ve ever seen. Sales dropped a whopping 8.7 percent, according to the U.S. Census Department, making it the single biggest drop since the government started tracking retail numbers in 1992. Nobody is looking forward to the March to April numbers.

Second, while many shrewd people knew that the hotel sector was among the most vulnerable to this particular kind of catastrophe the evidence was brought into stark relief last week when Trepp released the remittance data of single-asset single-borrower and commercial mortgage-backed security loans. Hundreds of assets were transferred into special servicing.

On the flip side, property owners are dusting off their notes on loan workouts, given it’s been almost a decade since the market saw significant distress. They’re bombarding servicers with requests for forbearance, as well as making other requests such as using reserves in lieu of mortgage payments and waiving the LIBOR floor on floating-rate loans. The pain is mostly centered among hotel and retail borrowers, but others remain on edge.

And, for good measure, Mayor Bill de Blasio cut $2 billion out of the city’s budget, in preparation for the financial problems ahead.

Of course, none of this is going to get any better until COVID-19 is under control and the country can reopen. To advise him on this, President Donald Trump turned to those he knows best: real estate bigwigs.

Of the 200 members of his “Opening the Country Council” some of the boldfaced names include David Simon, Jonathan Gray, Donald Bren, Barry Sternlicht, Steven Roth, Stephen Ross and Steve Witkoff. (Hey — that’s a lot of Steves!)

In the meantime, some of the less high-profile real estate professionals are hunkering down and doing what they can, doing meetings virtually. (In some cases doing so with their children playing in the background.) And while “dealmaking” sounds like a term from the before times — the long, long ago — deals are actually happening.

While Commercial Observer’s lease column has been bare for the last couple of weeks, there were, in fact, several bona fide deals inked.

How will this all shake out in the end? Who knows! If it weren’t so corny, we’d remind you that your humble local Blockbuster should have a copy left of “Contagion” to while away the quarantine.