The 78-year-old founder of Crown Acquisitions was a friend of President Trump and key player in his rise to the White House. 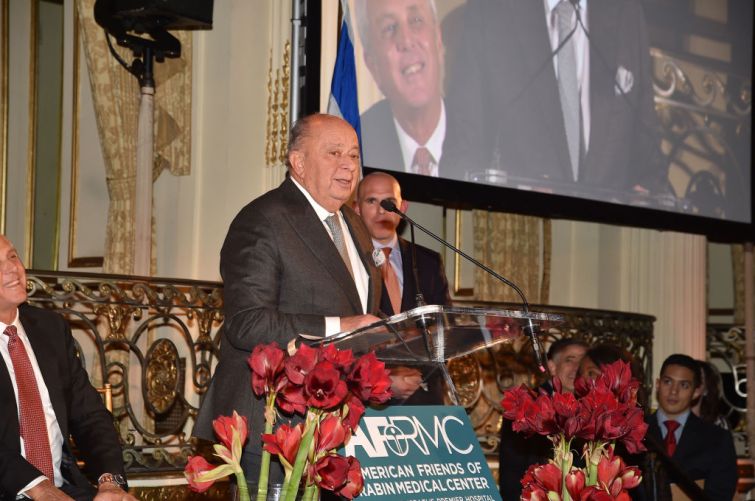 Stanley Chera, the founder of Crown Acquisitions, died due to complications from the coronavirus. Photo: Patrick McMullan/Patrick McMullan via Getty Images

Stanley Chera, a former powerhouse in New York City real estate who made his name with his retail acquisitions and a longtime friend of President Donald Trump, died over the weekend from complications caused by the coronavirus. He was 78.

Chera, who founded Crown Acquisitions, was admitted to New York-Presbyterian Hospital late last month after he contracted COVID-19, and fell into a coma before he died on Saturday, The Real Deal reported.

The Brooklyn native was a close friend to Trump — donating thousands of dollars to his campaign and using his wide influence to help Trump’s rise to the presidency — and known for his big retail purchases in Manhattan, especially along Fifth Avenue.

“He was a larger-than-life personality,” said Jonathan Mechanic, the head of Fried Frank’s real estate group who worked with Chera on a number of deals including the purchase of Herald Center. “He was smart, he was funny, he was warm, he was embracing and he was well-loved by the community — both the Syrian community and real estate community.”

“It’s very hard not to like Stanley,” Mechanic added.

Chera, based on the advice of Trump, had decamped to his summer home in Deal, N.J. — known as a vacation destination for real estate moguls in the Syrian Jewish community — as the coronavirus exploded in New York but still contracted the disease, according to TRD. His wife also was diagnosed with COVID-19 but recovered.

News of Chera’s diagnosis and coma reportedly hit Trump hard and was one of several reasons the president decided to keep the strict social distancing guidelines to stop the spread of the disease in place, Vanity Fair reported.

“Boy, did that hit home,” Trump donor Bill White told VF. “Stan is, like, one of his best friends.”

Chera was born in Brooklyn in 1942 and got his start working at his father’s children store in Downtown Brooklyn called Suzette Kiddie Store, as Commercial Observer previously reported. The family later changed the name to Young World and expanded to several other outposts in the borough.

After becoming frustrated with the amount of money he paid to landlords each month, Chera decided to invest his cash into real estate himself.

“I was paying $2,000 a month rent and I was doing business up to the sky,” Chera told the New York Times in 2010. “I said, ‘What am I doing?’ The building next door came up for sale, so I purchased it and started accumulating properties in the city.”

And Chera didn’t stop there. He eventually founded Crown Acquisitions — currently run by his two sons Richard and Isaac — and kept picking up properties, eventually expanding into Manhattan.

Chera eventually bought a stake in the Olympic Tower at 641 Fifth Avenue, the Cartier Mansion at 653 Fifth Avenue and 450 Park Avenue, according to its website.

“He was a very brilliant man with great business acumen and with a very kind, gentle and giving heart,” said Charles Kushner, the founder of Kushner Companies who sold the retail portion of 666 Fifth Avenue to Chera and the Carlyle Group in 2018. “He was extremely shrewd, a very good judge of character and he had a very good eye for value and how to create value in real estate.”

Chera told the Times that the key to his success was making sure his properties were underleveraged.

“We borrow maybe 35 percent; on some properties, it’s 25 percent,” he said. “The secret is to stay underleveraged and you can own something forever.”

Kushner said one of the things that was overlooked in Chera’s life was his family’s philanthropic work. He donated millions to the Rabin Medical Center, National Jewish Health and charities dedicated to helping special needs children, The Jewish Voice reported. Kushner met Chera when he needed a favor and somebody suggested he reach out to Chera for help.

“Sure enough we spoke; he helped me without even knowing me,” Kushner said. “We became close friends and business partners thereafter.”

Chera is survived by his wife, Frieda, and his three sons: Richard, Isaac and Haim (who left Crown Acquisitions last year to head up retail at Vornado Realty Trust, which has partnered in deals with Chera before.)

How South Florida Has Grown as a Market for Business