The Last Blockbuster on Earth Is Still Open

The Bend, Oregon, location is offering curbside service during the coronavirus outbreak. 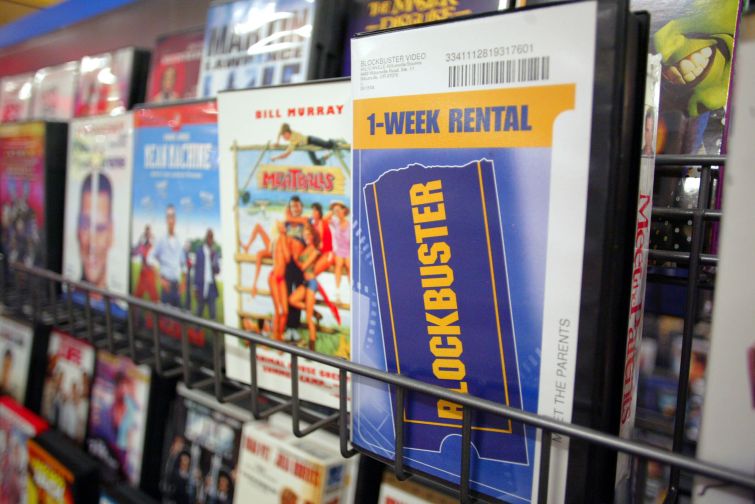 The last Blockbuster on Earth is still open for business, even as the coronavirus pandemic has destroyed nearly every other kind of retailer in the country. But it’s not exactly business as usual.

Located in Bend, Oregon, next door to a take-and-bake pizza shop, the lone Blockbuster holdout is offering curbside service, and will soon reopen to the public with social distancing measures in place.

For now, customers can call in and order a movie in advance and then drive up to the store to pick it up.

“We clean ‘em, put ‘em in Ziploc bags, and when they pull up, we hand it to them,” Sandi Harding, the store’s general manager, told Commercial Observer. There’s even a copy of “Contagion” still available, a Blockbuster employee confirmed.

“They’re doing as good, if not better,” said landlord Kurt Schneiter, principal of Maverick Investments, and a big Blockbuster acolyte. “People walk in, they get a movie, they pick up a pizza; it’s the perfect date night.”

The Bend outpost became the last remaining Blockbuster in 2019, after stores closed in Perth, Australia, and Alaska. It attracts visitors from all over the country, not to mention the world, and a significant portion of their revenue comes from Blockbuster-branded merchandise. “Every time I go there, people are taking selfies,” said Teri West, who manages the property. Prior to the coronavirus, that is.

Blockbuster plans to reopen its doors to visitors soon with strict social distancing measures, Harding said, something that’s possible given the store’s size. “Now that people are getting used to social distancing, I feel safe enough to reopen with limited contact,” she said. The store will be redesigned to allow for one-way aisles, they’ll use every other register, and the number of visitors will be limited to between ten and 12 at a time.

Unlike in the hardest-hit states like New York and California, Oregon Gov. Kate Brown’s executive order mandated the shutdown of certain categories of businesses, while others can remain open if they maintain social distancing.

Harding initially kept the store open after the executive order, but people weren’t following the rules. “It was a mess. People weren’t used to it enough to know to stay apart,” she said, but things have changed quickly, and it’s become the norm to wear masks, to have spaced lines at the grocery store, and people even pause before turning in to a new aisle. “It’s like the culture has changed, so I think we can probably do it.”

In the meantime, business has slowed at the Blockbuster. “It’s pennies in the bucket compared to what we typically make in a day,” Harding said, but she and Blockbuster’s owners wanted to be there for their customers, and keep their workers employed. “We have loyal customers and I want them to be safe, but I also recognize that they’re stuck at home, and not everyone has streaming services,” Harding said.

Even with the slowdown, the plucky success of the sole remaining Blockbuster, which is celebrating its 20th anniversary this year, is ironic in the face of the wider decimation of most non-streaming movie businesses. With theaters closed across the country indefinitely, and most major blockbuster openings pushed months, or to 2021, few theater companies will escape unscathed.

AMC Theaters, the largest movie theater company in the country, is facing bankruptcy after closing its 600 locations and furloughing 26,000 workers, while competitors Cinemark and Cineworld are facing similar issues. Independent theaters like Alamo Drafthouse and New York’s Film Forum have started at-home programming, and video stores are barely hanging on. Vulcan Video, a beloved video rental store in Austin, Texas, announced that it was closing for good in April, Community Impact Newspaper reported.

Schneiter, who is based in Los Angeles, confirmed that Blockbuster paid its rent for April, and says he won’t let them break up with him even if they wanted to. In fact, he has a development planned for the area after this is over. It’ll be an apartment building named — wait for it — the Blockbuster.

“The thing that’s amazing about Blockbuster,” said Schneiter. “You’re walking through the aisles, I’ll see a movie that’s a childhood favorite of mine; we just watched ‘E.T.’ with my 9-year-old. She thought it was the most fantastic movie.”

On Netflix, he said, you have to know what you’re looking for. “It’s all trapped in a sea of sameness,” he lamented.

But Blockbuster is like an instant nostalgia machine. “Walking in there, I’ll remember a movie that I’ve seen with my parents when I was 14. It brings me back,” West said.

“Or, I’ll remember the girl I saw that movie with,” Schneiter added. “And I haven’t thought of her in 40 years.”

While Blockbuster is closed to visitors for the moment, Harding has made several exemptions over the last couple weeks. In one case, an army veteran was moving from his home state of Washington to Texas, and planned to pass through Bend on the way, to see the last Blockbuster. It would be his one opportunity to do so.

He contacted Harding, and she agreed to let him in after-hours, with just the two of them in the shop keeping six feet apart. He came in, looked around, and bought a Blockbuster-emblazoned t-shirt before continuing on his way.

“That was something I could do for that person,” Harding said. “We can maintain our distance in a 4,000-square-foot store.”