The Kids in the Hall: Juggling CRE Business With Young Children

It's a Zoom world, and real estate professionals are doing their best, conducting business with occasional interruptions from their children. 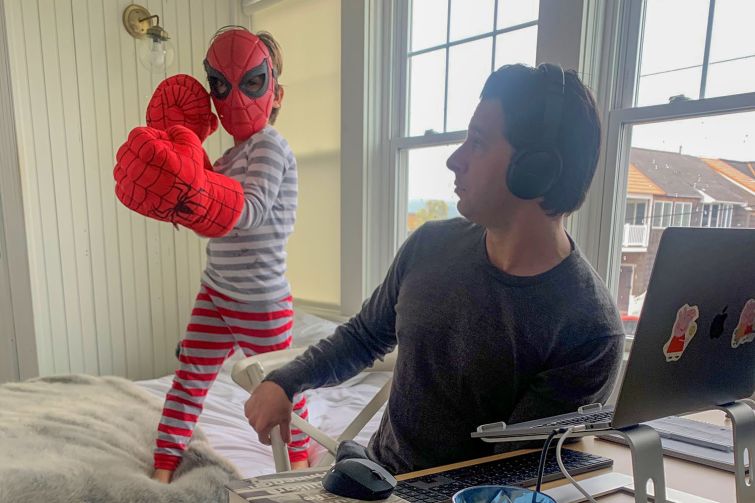 Real estate can be a challenging industry at the best of times. The work is complex, and the competitors are both numerous and clever. But the industry that has survived World Wars, natural disasters, and numerous financial crashes is now facing an unprecedented challenge: our children.

In a scenario that’s been like something from a Stephen King novel, earlier this year, a new, highly contagious, and rather deadly virus, COVID-19, began to attack people in the United States. The public-health response was to isolate all but the most essential workers in their homes, discouraging the use of offices and public transport. In service of reducing the rate of transmission in order to prevent the health care system from being overwhelmed, popularly known as “flattening the curve,” private schools began to close, and then public schools followed, closing on March 17 in Connecticut and a day later in New York and New Jersey. Meanwhile, babysitters, nannies, and other caregivers, normally a source of great support for working parents, stayed in their own homes to protect themselves and their employers. So now, real estate pros, in industries from architecture to development to proptech, find themselves juggling the work of both their jobs and parenting.

“I have a 5-year-old, Axel,” said Nick Romito, founder and CEO of commercial real estate software platform VTS. “And a wife, Leah, who is working 12 hours a day as the GM of an online beauty platform. And she’s eight-and-a-half months pregnant. We’re doing all that while I’m running a company, and we’re homeschooling. These are individual jobs that any one person would do full-time. No one individual could do all these jobs in a day. It’s not possible.”

Romito, who has built a company with 250 employees and a billion-dollar valuation from the ground up in less than a decade, is arguably a better-than-even-spectacular manager, so when he calls the challenge … “impossible,” he’s right. But it’s in the DNA of real estate people to not back down from even an impossible challenge.

Many have taken to calling their younger kids “coworkers,” as in, “I was trying to have a productive day at the office, but everything went pear-shaped when my coworker refused to wear pants today.” Still others have attempted to take up the challenge of supporting their older kids’ schooling.

“Every developer I’m on the phone with is getting good at either first-grade math or algebra,” one architect noted drily. The schools, for their part, can’t win, with parents either declaring that there isn’t enough “appointment video” (wouldn’t it be great for the teacher to set up a standing 1 o’clock so I know I can have a work call?) or that there is too much appointment video (our teacher tried having certain lessons on dial-in video at certain times, but I needed to help my kid with the dial-in, and then I couldn’t make my 1 o’clock work call.)

If you’re chasing around a younger kid, bear in mind that even those with older children don’t necessarily have it easy. Robert Nelson is the president of Nelson Management Group, a management firm that specializes in management of multifamily properties in New York City. The firm owns and manages about 3,400 units, mostly “workforce” housing with rents ranging from $1,000 to $2,500, in Brooklyn, Queens, Manhattan and the Bronx. His job is fairly challenging right now: “We’re housing the essential workers.”

Meaning, a lot of his tenants are nurses, police officers, and the like.

“I’m putting together a memo for my tenants about some sort of rent-deferment program while trying to collect the rent; remember, we still have to run the elevators and provide electricity and heat and hot water and pay staff.”

And yet he has an unexpected coworker in his Upper East Side living room: Nelson’s 19-year-son, Dylan, a freshman at Washington University in St. Louis, came home for spring break and then received an email asking him not to return to campus. (The University, which had initially attempted to keep away students who were in the virus hotspots of New York City and Seattle, has since increasingly gone virtual, canceling Commencement and moving all instruction online.)

What’s more, the returnee was on the night shift.

“He’s a responsible kid, but he still has the college life where he goes to bed around 2-2:30 [a.m.] which drives me bananas,” Nelson noted. “I’m still [driving in] to the office — we’re sheltering those who are sheltering in place — but I have to keep my voice down when I’m getting ready in the morning. I’ve never been a suburbs person; I grew up in Brooklyn. But you kinda wish you had a house at this stage.”

Of course, having a house then prompts the desire to fill it. Jared Epstein, a principal at Aurora Capital, had been tracking the threat of COVID-19 since early January, and he and his wife had already taken their two boys out of their private pre-K when the NBA shut down. “On Thursday, I went to work, made the calls I needed to make, packed up the car and drove out here,” he said, referring to a vacation home in Water Mill, N.Y., that he noted the family is “fortunate” to have. “We came out here for the space; we came out here because we have a larger area than our small apartment in the city.” Then, he said, “things got really challenging in terms of business about two weeks later … our restaurant, retail, and even a few office tenants, started, with a phone call, or an email, or an official letter from a lawyer, to reserve their rights for rent abatement or rent deferral under the pandemic. That’s the force majeure.”

Yet, in the middle of this business firestorm, the existence of a backyard prompted the family to go ahead with long-delayed plans to adopt a dog, Maverick.

Now, Epstein, says, he’s on the phone, negotiating with tenants. “If there’s a deferral, how long is the deferral? When is it paid back? Also, there are tenants that we were negotiating deals with before this, two of them look like they’re still going to happen, and I think they’ll get signed in the next couple of weeks. The deals that we had negotiated going into the crisis were fair, we always want to make sure that our tenants have the resources they need.”

Meanwhile the kids, Jagger Maddox (“three and three-quarters”) and Brant, 2, are around, and he and his wife Mindy are trying to keep them entertained and happy.

“I’m working, I’m reading, and I take the kids out to feed the birds by the bay, taking my younger son in a long three- or even five-mile walk in the stroller, so he can get his nap in and I can get some exercise, and in the midst of all that, we’re trying to train a puppy.”

Pre-crisis Mindy had been a stay-at-home mom; has her territory been invaded?

“When I’m busy and I’m on a conference call or Zoom, she enjoys having me here,” Epstein joked. “But sometimes she’s ready for me to go back to the routine of work.”

Routine, remember routine? Like being jostled in a crowd, it’s a not-that-great thing that is beginning to seem nostalgic as we wade through the New Normal.

“I am looking forward to getting back to a regular routine; I’ve never been so tired,” said Dan Marks, a Brooklyn-based partner at Terra CRG. His wife is a doctor, a pathologist with the Medical Examiner’s office, so their days are spent juggling her vital work, his work, and the needs of their two boys, Luka, 4, and Niko, 10 months. In addition to the two-bedroom, no-backyard problem, Marks is missing one of a broker’s traditional competitive edges: the early morning. “My 10-month-old wakes up at five every day, so there’s no opportunity to get ahead of the game,” he said. Instead, he does a heavy night shift. “Once the kids are down to sleep, I’m on emails for a few hours, and I call the people who I know will be okay with my calling them at that hour.”

“I have daily check-in calls with my team,” said Marks, “and there are deals that are still active, deals that I’m negotiating right now.” Sometimes those flare up while his wife is working. “I’m really fortunate and proud to have a wife who’s doing necessary work for the city,” he said. “But if I’m on a Zoom, and my wife is working, the kids, they want attention.”

The good news is that clients are understanding: “I try to remember that it’s funny, that they just want to be kids.”

This is a point that Romito echoed. “I’ve been in two customer meetings with prospects, and we’re having pretty serious conversations about price — and in comes Spider-Man in full costume! And customers are like, ‘I want to see him, I want to see your kid.’ ”

One thing that Marks did early in the pandemic was to start, with two competitors, raising cash for some local nonprofits.  With DJ Johnston of B6 Real Estate and Sean Kelly of Ariel Property Advisors, he put together a fundraiser for local food and workforce charities such as CHiPS, the Campaign Against Hunger and Opportunities For a Better Tomorrow. “We were looking to show that even three people who are competing in the same space every day could co-operate and do something immediately,” Marks said. Point made: They’ve raised more than $20,000.

“I get worried, ‘am I getting lapped by competitors because I’m home with my kids?” Marks told Commercial Observer. “But we have to remember that this is a hard time. Don’t beat yourself up if you’re not on the phone making 50 calls a day.” He added, “I feel a lot of obligations to my partners and my team and my clients to be fully engaged in the market, but it is a hard time, and we’ll come out of it. It’s OK if you’re not as productive as you were a month ago, or will be a month from now.”