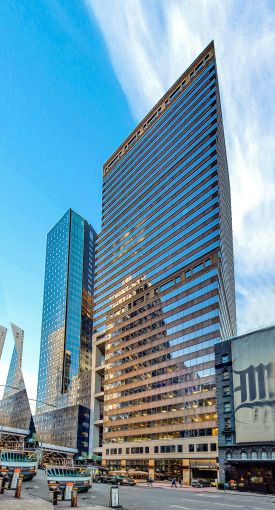 The fund signed a 12-year renewal for its space on the entire 31st to 35th floors and 39th to 40th floors of the building at 120 West 45th Street between Avenue of the Americas and Seventh Avenue, according to landlord brokers Avison Young. Asking rent in the 40-story building is more than $85 per square foot.

D.E. Shaw was founded in 1989 and has been at Tower 45 since 2011, according to Avison Young. The hedge fund, which has $50 billion in investment capital, also has offices in Boston, London and Hong Kong.

“We were pleased to represent Steve [Levy, the head of Kamber] and Tower 45 on such a significant transaction, which was executed during an uncertain time in the market,” Ryan said in a statement. “This early renewal validates the commitment Kamber Management Company has made to the building through its multimillion-dollar capital program that has included upgrades to the building infrastructure, reimagined common areas and a new lobby.”