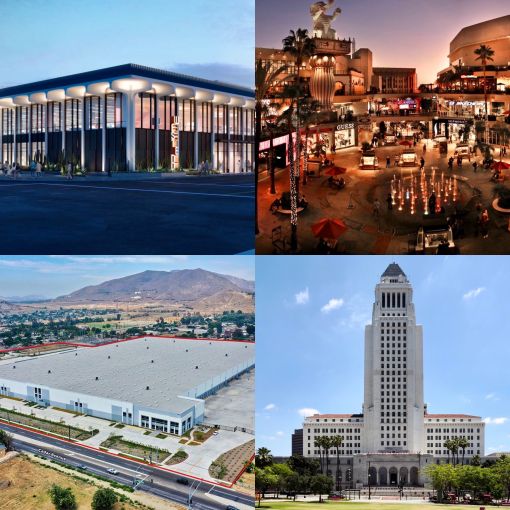 The real estate landscape in Southern California continued to expand and evolve this year with major pre-lease agreements for unbuilt office space as well as big commercial trades and massive industrial sales.

The narrative was defined by alleged wrongdoings in Los Angeles City Hall and with California professionals tied to the college admissions scandal. It was also driven by the first statewide rent control reform in a quarter century, and the proliferation of streaming companies. Tech and media firms like Google and Netflix, along with prominent real estate companies like CIM Group and Blackstone, continued to make the biggest waves and drove the action in 2019.

One of the biggest stories in California came from the approval of Assembly Bill 1482, the first statewide rent control expansion in 25 years. The new law caps annual rent increases to 5 percent plus inflation until 2030 on properties completed before 2005. It also eliminates the ability to evict tenants without cause. Approximately 1.2 million additional households in Los Angeles County will now have rent control under the new law.

The new law set the stage for another contentious year, and rent control is poised to be one of the largest stories in 2020 after it’s implemented on January 1, 2020. Industry leaders criticized the bill for creating inverse effects and said it will discourage further investment. AIDS Healthcare Foundation is preparing to put another rent control measure on the statewide 2020 ballot.

Los Angeles City Hall has long been fighting the perception of a pay-for-play system that gives too much control to developers. Real estate companies with pending projects have been some of the biggest sources of political funds for officials. That fight came to a head this year after the FBI started searching for evidence of kickbacks, extortion, money laundering and bribery between the private sector and officials.

Agents raided the office and home of City Councilman Jose Huizar, who was chairman of the Planning and Land Use Management Committee, which helps determine which projects are approved throughout the city. No one has been charged with a crime, but Huizar was stripped of his post at the end of last year, and a warrant filed with the U.S. District Court named 13 officials, including former aides to Mayor Eric Garcetti, as well as Councilman Curren Price and an aide to Councilman Herb Wesson.

The events were part of what led to the City Council approving a new measure to curb political spending and the perception of developer influence. The new regulation takes effect in 2022 and will prohibit developers from contributing to campaigns for candidates for city council, mayor’s office and the city attorney’s office during the entitlement periods. The restriction will last for one year after the final decision on a project, and it applies to property owners or companies that file applications, as well as all executives, directors, board chairs and stakeholders.

The creative and modern office craze continued to drive the commercial sector on the Westside of L.A. County this year, with more plans to build massive properties, and more top-tier firms agreeing to lease space years before it’s built.

Experts say there are more pre-leasing agreements in L.A. than ever before. That trend was propelled by Google, which started 2019 by agreeing to lease the entire One Westside project for 14 years after it’s completed in 2022. Hudson Pacific Properties and Macerich are transforming the former Westside Pavilion mall in West L.A. into 584,000 square feet of new office space.

Goldstein Planting Investments Companies followed suit when it announced its own plans to convert the remaining area of the Westside Pavilion into 230,000 square feet of modern office space next door. ACORE agreed to provide $120 million for the project in November.

Areas on the Westside to the South Bay, such as Culver City and El Segundo, continue to see a steady stream of big deals for modern office conversions. Other major leases this year were found in Downtown L.A., like the 370,000-square-foot lease for L.A. Care Health Plan at an office property owned by Rising Realty Partners.

Content streaming services like Apple, Amazon and others have been gobbling up space in Hollywood and Los Angeles County the past few years, and now they’re adding historic movie theaters to the list.

In April, Netflix made a bid to buy the historic Egyptian Theater on Hollywood Boulevard valued in the “tens of millions of dollars.” It originally opened in 1922 by iconic showman Sid Grauman, who also ran the famous Chinese Theatre a couple blocks away. The irony wasn’t lost for the firm that made its way by providing content to be specifically consumed without theaters. Netflix also opened New York City’s Paris Theatre this year to screen its prominent films, according to reports.

Companies haven’t slowed down bulking up their space for streaming content, too. Disney signed a 116,000-square-foot lease in Burbank that starts in 2020.

One of the blockbuster deals in Hollywood came from the sale of the enclaves most iconic retail center — the Hollywood & Highland Complex on the main drag of Hollywood Boulevard. CIM Group sold the complex to development firm DJM and Gaw Capital, an international private equity firm.

The deal was valued at about $320 million, according to reports. Records show it previously traded for $142.2 million in 2013. The two new owners plan to reimagine the 463,000-square-foot center next year. CIM Group retained ownership of the Dolby Theater, where the Academy Awards ceremony is held.

Most signs point to continued growth for warehouse real estate, particularly for the Inland Empire, which is east of Los Angeles. For example, earlier this month, ASB Real Estate Investments purchased the Bloomington Logistics Center for $100.5 million, adding to a string of consistent trades in the region.

Many of the top stories that broke and the issues that defined the year led to the new list of the top players in L.A. real estate by Commercial Observer. From Chris Graham and Jimmy Yung at Blackstone to Hudson Pacific Properties CEO Victor Coleman to Governor Gavin Newsom who signed the new rent control ordinance — the list shows the individuals behind some of the largest deals and biggest stories of the year, and who’s calling the shots became one of the top stories for Commercial Observer in 2019.