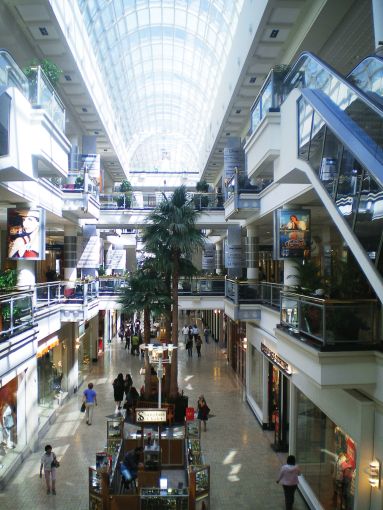 The interior of the Westside Pavilion, which is to be redeveloped as One Westside. Photo: Wikipedia Commons

Google will rent almost the entire former Westside Pavilion mall being redeveloped by Hudson Pacific Properties in partnership with Macerich, Hudson announced in a release today. The tech giant signed a 14-year lease to occupy 584,000 square feet of the complex, which will be called One Westside, upon the completion of construction and tenant upgrades in 2022.

Hudson Pacific acquired majority control of Westside Pavilion last March and has plans to turn the three-story mall on Pico Boulevard into offices geared toward tech and entertainment companies, as Commercial Observer reported. (Hudson Pacific holds 75 percent of the joint venture and acts as the property’s day-to-day operator, with Santa Monica-based Macerich, the longtime owner of the property, 25 percent.)

“One Westside represents adaptive re-use on a grand scale and provides a unique creative office environment,” Victor Coleman, the chairman and CEO of Hudson Pacific Properties, told CO. “We had multiple, well-qualified tenants interested in One Westside from the moment we announced the deal; however, Google was able to negotiate the best deal for all parties.”

Todd Doney and Blake Mirkin from CBRE represented Hudson Pacific Properties. A spokeswoman for CBRE declined to comment on the deal.

“Google’s been a proud member of the Los Angeles community since 2003,” RG Kahoe, Google’s real estate project executive said in the release. “We’re excited to continue investing in the community as part of Hudson Pacific and Macerich’s adaptive reuse project at One Westside.”

Google’s foray to the Southland began with the acquisition of Santa Monica-based Applied Semantics, when it only had a dozen or so employees, as The Los Angeles Times reported. The tech giant’s presence has continued to grow in the region, with the company leasing 100,000 square feet of space in Venice and just moved into a revamped 450,000 square feet of space at the “Spruce Goose” hanger in Playa Vista this fall.

It was unclear who represented Google in the transaction, with the tech giant declining to comment further or to provide additional details.

Construction is expected to begin later this year, with Hudson calling it “a first-of-its-kind conversion from a landmark shopping mall to Class A creative office space,” in the company statement. To be designed by Gensler, the property will repurpose high ceilings and a multi-level atrium and skylight, allowing for natural light-filled interiors. Up to 150,000-square-foot floorplates provide hyper-flexible open layouts, while 45,000 square feet of expansive exterior terraces and patios with 15-foot wide folding glass walls create a seamless indoor-outdoor environment. The property also features a rooftop amenity space with a garden deck and direct bridge access to the approximately 100,000 square feet of retail being maintained on-site, including the Landmark Theatre, Westside Tavern restaurant.

The Pavilion, which opened in 1985 was once one of the city’s top shopping malls and pop culture landmark, featured in such movies as “Clueless” and the music video for Tom Petty’s song “Free Fallin.” However, the property has struggled with weakening occupancy rates given the rise of online retail and nearby competition, including the Westfield Century City, which completed a $1 billion revamp in 2017. The redeveloped mall has siphoned off business and longstanding tenants from Westside Pavilion, with Nordstrom leaving for the Westfield Century City mall last year and Macy’s, which already opened a new store at Century City, before closing its location at the Westside Pavilion.

Nationwide, malls operators have worked overtime to revamp and reposition struggling properties by adding amenities from the once shunned fitness centers, pop-ups, immersive art exhibits and trampolines. Then there’s the long-stalled American Dream Mall in New Jersey, which, when completed will have the nation’s first indoor ski slope, an aquarium, indoor water park and the largest indoor theme park in the Western Hemisphere with four roller coasters, as CO previously reported.