Despite court decisions, the battle between developers and NIMBY groups continues 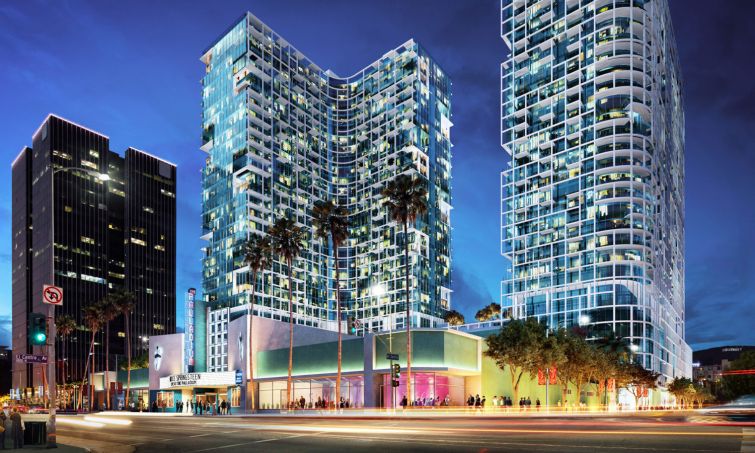 A rendering of the towers that are set to rise next to the headquarters of AIDS Healthcare Foundation, left, which opposed the project and sued the city over development in Hollywood. rendering: Crescent Heights

Los Angeles has long been a battleground for the most prolific planning and land use issues in California, where developers and landlords struggle with activist groups that are dedicated to reining them in.

More so than rising construction costs, developers and real estate experts tell Commercial Observer that the top challenge to production is the difficulty and risk involved in the entitlement process, which is made more strenuous by local groups who delay projects with appeals and court challenges via the California Environmental Quality Act (CEQA). The issue has been an ever-growing concern for years as delays add more costs, especially for housing developments in a time when the city is experiencing a historic housing shortage.

Carl Muhlstein, a broker for JLL, has been calling for CEQA reform for years, and said the costs that come from delays are becoming insurmountable for developers. He said lawmakers must address delays to break ground, as well as transparency behind serial litigation challenges using settlements to hide payoffs and avoiding prevailing party legal fees liability.

“Developers are interested in providing affordable housing with expedited approvals,” he said. “It’s always easy to blame the developer for high prices, but it’s just not the case. It’s very frustrating. As a commercial broker, a resident, a father of two sons, I am concerned about the government’s ability to deliver affordable housing in a growing housing crisis.”

Sometimes, a few projects can be exempt from CEQA requirements, but that doesn’t shield them from appeals or court challenges. The projects that are not exempt from CEQA are required to complete environmental reports that can take more than two years to finish in many cases. Afterward, they can still be challenged in court, further delaying the builder from breaking ground by years at a time.

The 200,000-square-foot Target retail development in Hollywood has been one of the top examples over the past decade for projects hindered by CEQA. An opponent group noticed the city failed to complete an additional impact review after it was approved, which was required by CEQA. The opponents successfully challenged the project, and delayed the completion of construction by years. The project was first stalled in 2012, and was not resolved until March this year.

Other projects run into opposition from other interests like labor unions. For example, Laborers’ Union International of North America has appealed the environment review via CEQA for Holland Partner Group’s 185-unit apartment proposed for Hollywood. UNITE HERE Local 11 forced developer Perri Lee to create a new project after they appealed plans for a 120-unit hotel at 2870 West Olympic Boulevard, according to reports.

But despite recent losses for the opposition groups at the ballot box and in court — which have decided in favor of the development process and approved megaprojects — opponents are showing no signs of easing their fight to curb the rate of construction in Los Angeles, and the issue is set to continue playing out.

In November, a Superior Court Judge ruled in favor of the city of Los Angeles and four development firms who are building major developments in Hollywood. The lawsuit came from AIDS Healthcare Foundation (AHF), which has been the most active group in the city in seeking to clamp down on property owners and developers.

AHF was formed by Michael Weinstein in 1987 to provide testing and healthcare services for HIV patients. For at least the past five years, the firm has increasingly been involved in controversial efforts to thwart major development projects and policy in Los Angeles. Weinstein has said those efforts are consistent with the firm’s mission of addressing issues facing disadvantaged people, and that high-priced projects gentrify neighborhoods and force people with AIDS and HIV out of L.A.

In the past year, AHF lost at least three land use-related lawsuits, and failed at the ballot box with Proposition 10, which AHF drafted and spent tens of millions of dollars supporting. Nearly 60 percent of voters voted against Proposition 10 in November 2018, which would have repealed the state law that prohibits rent control on properties built after 1995. After the ruling, Weinstein said the foundation will appeal the dismissal of the lawsuit.

In early December, a branch of AHF submitted signatures to put a new version of the failed Prop. 10 on the November 2020 ballot. If approved, the measure would give municipalities the ability to add new rent control limits — at 15 percent over three years — to buildings that are up to 15 years old.

State lawmakers already approved rent control expansion this year for the first time in 25 years. The new measure takes effect next month and caps annual rent to 5 percent plus inflation.

“Weinstein’s flawed initiative would reduce housing options for Californians and make our housing crisis worse,” he said in a prepared statement.

Developers have held steady, and are expected to continue opposing such measures. Firms like Blackstone, Western National Group, Essex Property Trust, and Equity Residential each donated more than $1.5 million on efforts to defeat Proposition 10. The California Association of Realtors also added $1.5 million.

In Hollywood, AHF filed four separate lawsuits challenging four projects on Sunset Boulevard — where AHF has its headquarters. Despite losing two of the four, the foundation filed another lawsuit against the city in August that cited all four projects.

The lawsuit included the $1-billion Crossroads Hollywood by Harridge Development Group, which will add a 26-story hotel, 190,000 square feet of commercial space, and about 950 new units; the Sunset Gordon tower by CIM Group which will add about 300 units; the Hollywood Palladium Residences by developer Crescent Heights that includes 730 residential units; and 6400 Sunset, a 200-unit project by GPI Companies on the site of the Amoeba Records building.

AHF helped fund a new lawsuit filed this month by an affiliate of the Los Angeles Tenants Union, according to the Los Angeles Times. The group argues that the developers of Crossroads Hollywood did not follow city requirements aimed at protecting renters of existing residential properties that will be demolished.

AHF was also behind the notorious Measure S ballot initiative in 2017, which would have implemented a two-year moratorium on projects that require zone changes or height increases. Measure S was rejected by nearly 70 percent of voters in Los Angeles. AHF’s involvement in land use issues was criticized by City Controller Ron Galperin, among others, at the time.

“Michael Weinstein has sadly injected his organization into a debate over land use that has nothing to do with HIV or AIDS or healthcare,” Galperin said at the time. “In the process, unfortunately, AHF is squandering millions of dollars that should be spent on HIV prevention and treatment.”

Ryan Leaderman, an attorney with Holland & Knight, focuses on helping his clients adhere to regulations and avoiding litigation.

“It absolutely is a fear for developers to be stuck in litigation for years,” he said. “It can kill a project or cost a tremendous amount to survive litigation, even if it’s for a bogus reason. It definitely has a chilling effect on development.”

He explained that EIRs — environmental reports required by CEQA — need a lot of technical analysis, and can take more than two years to complete. They can also cost more than $1 million, especially if there is opposition. It has birthed a cottage industry for CEQA for consultants and attorneys that support or oppose the EIRs.

Leaderman explained that there are benefits to CEQA, and it addresses real environmental issues. He said its goals are good, but there is a “big disconnect” between the goals and the way it’s used.

“The way that we structure the law gives a lot of power to people who can be an extortionist,” he said.

Leaderman’s first experience with CEQA litigation involved Caruso Affiliated at the Santa Anita racetrack about 15 years ago. He estimated that Westfield spent about $10 million at the time fighting Caruso’s shopping center opening next door to them. Leaderman said it’s difficult to connect all the dots to find out who’s funding opposition efforts, but they also suspect Westfield funded a community group’s challenge against the project.

As California continues to suffer a historic housing crisis, many opponents also lament that lack of “affordable” housing produced, while “luxury” housing projects continue to rise. Developers, however, point out that higher rent is the only way major projects pencil out, especially with added fees and requirements from each municipality.

Simon Aftalion, development director for Markwood Enterprises, explained how the fees, risks and the “ever-changing and more restrictive city requirements” involved in the entitlement process add “tremendous cost to developers overall budget,” and leading to lower returns and less profit.

“As developers, it’s no secret that there are so many – often unexpected – factors in the entitlement process that drive up development costs,” Aftalion said via email. “While many city-related requirements — such as the inclusion of replacement units on top of the already required inclusionary income units — certainly have good intention, they contribute to more sensitivity as to entitlement risk due to the larger cost and dwindling returns. […] This leads to so many developers having no choice but to serve the top market with luxury housing in order to recoup costs; it makes for a perfect storm.”

AHF also joined many other opponents across the state and launched a campaign to oppose SB 50, the California transit-housing bill by state Senator Scott Wiener. The bill, which would allow four- and five-story buildings to rise near some train and bus stations, failed in the Legislature this year. But Wiener and Governor Gavin Newsom both vowed to revive it in the next session, setting the stage for more battles between NIMBY groups and the real estate industry. (The California Rental Housing Association supports SB 50.)

SB 330 was approved this year and will take effect next month. It incorporates some of the less controversial features of SB 50. Kristina Lawson, a former San Francisco Bay area mayor who is an affordable housing expert and heads the real estate and land use practice at law firm Hanson Bridgett, told the Observer that SB 330 should help stop cities from adding more restrictions to entitlement processes across the state. The law suspends development restrictions such as housing moratoriums and downsizing, and “requirements that don’t make sense from a sound land use planning perspective,” she said.

“Cities have tried to take some preemptive action to change fees and some land use rules before it goes into effect,” Lawson said. “But just based on reaction from the cities trying to increase development impact fees [before SB 330 takes effect], it leaves me to believe there will be an immediate impact.”

SB 330 also establishes a 12-month period for processing all housing projects, and limits the number of public hearings for new housing development to three total. Lawson said that will be “hugely beneficial.”

Leaderman said there’s no hope that CEQA will be reformed, He said former Governor Jerry Brown would say reforming CEQA is the “lord’s work,” but he wasn’t able to move the needle.

“If he lacked the political will and desire to reform this, then who’s going to do it?” he said. “There are too many vested interests.”