Behind the Netflix Bid for Hollywood’s Egyptian Theater 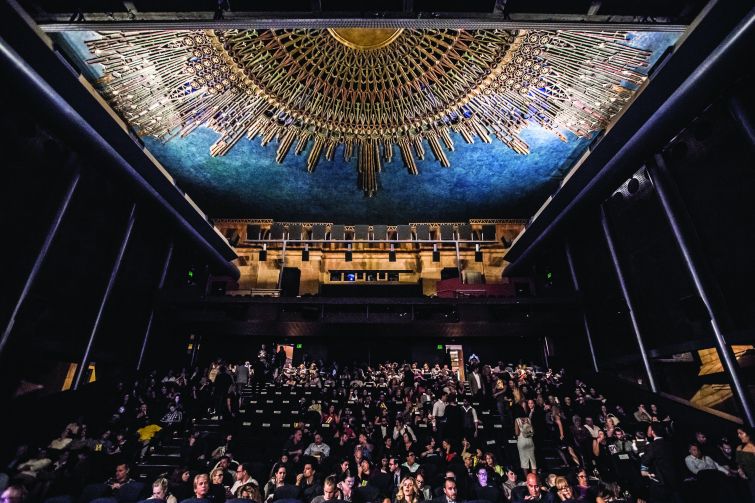 When John Girodo moved back to Los Angeles, his apartment search had one unusual criteria: it needed to be within walking distance of the historic Egyptian Theater on Hollywood Boulevard.

The theater was special to Girodo, who spent hours watching obscure films in its dark, gilded hall, which was built by showman Sid Grauman in the 1920s. While relatively low-key compared to its sister property, the glitzy Chinese Theater just two blocks away, its laurels include hosting Hollywood’s first movie premiere.

The theater, after decades of disrepair, was returned to its former glory in the late nineties, under the stewardship of nonprofit American Cinematheque. The nonprofit, a Hollywood institution that also operates the Aero theater in Santa Monica, provides programming and community for cinephiles.

So it came as a shock when, in April, news emerged that Netflix was in talks to buy the historic theater in a deal valued in the “tens of millions of dollars,” according to a report from Deadline. Netflix and the American Cinematheque are still actively negotiating the deal, both confirmed, but neither would provide a timeline for when it might close nor specific deal terms.

It would be quite a coup for Netflix to plant its flag in an iconic Hollywood cinema. Having muscled into the industry by dominating the internet, Netflix will be able to preen in the heart of Hollywood itself, screening its films, premiering award contenders, and hosting Oscars parties on the star-studded boulevard.

Netflix has already invested significantly in the Hollywood area, committing to occupy over 1 million square feet of office space in the next two years. It’s taking the entire 13-story new Epic development at 5901 Sunset Boulevard; 355,000 square feet across three buildings at Kilroy’s Academy on Vine development; and leased a combined 417,000 square feet at the Icon and Cue buildings in the Bronson Studios lot.

Its advances have not always been welcomed. In recent weeks, community activists have begun rallying, hoping to, if not prevent an outright sale of the theater, then to at least provide some input. They’re going head-to-head with the American Cinematheque board, which includes industry insiders like Paramount CFO Mark Badagliacca, producer Nick Ricita, and neo-Hollywood royalty Ted Sarandos, Netflix’s chief content officer. (Sarandos reportedly recused himself from the negotiations.)

For the activists, at issue is the fact that the city of Los Angeles sold the theater to the American Cinematheque for $1 in 1996 under an agreement in which the nonprofit would rehab the structure, which had suffered from earthquake damage in 1994, and operate it as a cultural center for the public.

“The Cinematheque is there to show amazing films that don’t have commercial distribution,” said Richard Schave, the Moses of the opposition and a co-owner of Esotouric, a tour company. For him, it’s unconscionable that an asset entrusted to a nonprofit for the public good would be thrown away by an incompetent, or disinterested board. “The world is made better by people watching old movies and new films that don’t have regular commercial distribution,” he said.

Recent events at the theater include the 55th annual Cinecon, a classic film festival, and a screening of the 1988 Polish-language crime drama “A Short Film About Killing,” directed by Krzysztof Kieslowski.

In 1991, the Community Redevelopment Agency (CRA) purchased the Egyptian Theater from United Artists, which was facing bankruptcy, and put out a call for a nonprofit to take it over, part of a concerted effort to revitalize the Hollywood Core.

“We adopted a revitalization plan, which helped to bring Hollywood back to its storied glory,” said Donald Spivack, the former director of operations at the CRA and a professor of urban planning at the University of Southern California.

In addition to the property itself, the American Cinematheque was awarded $5 million in federal and CRA funds to rehabilitate the building. They were to fundraise the remaining $4.5 million in project costs, according to city council reports from 1996.

It was not immediately clear which, if any, public agency would need to clear the deal.

According to Spivack, who brokered the deal between the CRA and Cinematheque, there would likely have been a predefined time limit, after which the nonprofit would have owned the asset outright. According to a city council memo from September 1996, Cinematheque was expected to operate the theater under the terms of the agreement “for a period of not less than 10 years.”

Regardless of the legalities involved, some community members believe it would be a betrayal for American Cinematheque to relinquish what they view as a public asset.

“I don’t believe the city intended to make a gift of a public asset like that, for it to end up in a for-profit’s hands,” said Miki Jackson, a preservationist who works with the AIDS Healthcare Foundation. “You don’t go around selling something that is entrusted to you for the benefit of the public to solve your particular financial issues.”

Among the issues facing the nearly 40-year-old American Cinematheque are an inquiry from the state attorney general for lax reporting of revenue; the departure of its co-founder and longtime president Barbara Smith in 2018; and a failure to remain relevant to a younger generation of film lovers.

The activists are also concerned that Ken Scherer, best known for founding the Night Before the Oscars party, and former president of the nonprofit Motion Picture & Television Fund, is representing the American Cinematheque in its negotiations with Netflix.  To them, Scherer lives in infamy for his attempt to sell off the Motion Picture home, a retirement community for Hollywood’s seniors, founded by Charlie Chaplin and other founding fathers of Hollywood, with a tin-can collection. (It was saved following an outcry by Hollywood elites, including George Clooney, Tom Cruise and many others.)

Councilmember Mitch O’Farrell, who represents the district in which the theater is located, did not respond to requests for comment regarding his position on the Egyptian Theater sale. He has previously praised Netflix’s investment in the area.

O’Farrell has been involved in a previous negotiation, in which Netflix was looking to buy another historic theater, the abandoned Pacific-Warner Theater in Hollywood, according to sources with knowledge of the proceedings.

If the sale goes through, it will be a big win for Netflix, which recently lost a skirmish in its battle with old-school Hollywood over the release of Martin Scorcese’s The Irishman, the company’s play for Oscar gold. The feature will premiere at the New York Film Festival in October and have a three-week release in independent theaters, after Netflix failed to reach an agreement with several national theater chains, who were holding out for a 90-day run, the industry standard.

One thing the sale won’t do is help Netflix qualify for the Academy Awards, since an Oscars contender needs to have a seven-day run in a commercial Los Angeles theater, and the Egyptian doesn’t qualify.

But at least they’ll get an invite to the Night Before the Oscars party.