Sunday Summary: Marc Holliday Believes 2021 Office Life Will Be Off the Hook! 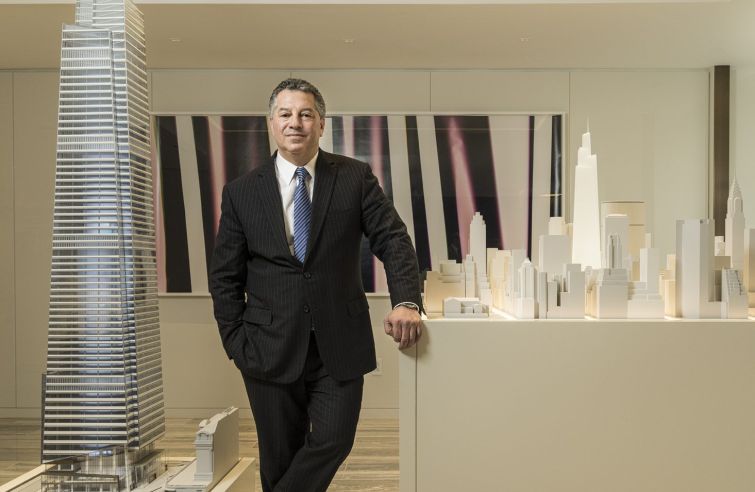 Marc Holliday at his office in Midtown showing off the model of One Vandy. Sasha Maslov for Commercial Observer

There’s an understandable impulse to play things conservatively and not raise too many expectations about the future, especially given all the negative turns fate took over the last year.

So it’s worth sitting up and taking notice when one of the most esteemed and powerful CEOs in the business says: New York is undergoing a “vast reawakening” and companies are returning to the office.

Those were the words of SL Green Realty’s Marc Holliday on his quarterly earnings call and on Andrew Ross Sorkin’s “Squawk Box.”

This might be fine and good to soothe the shareholders, but Holliday brought the receipts:

The REIT’s crown jewel, One Vanderbilt, which cut its ribbon last September at one of the worst possible moments to open an extremely expensive 1.7 million-square-foot piece of Class A office, is 77 percent leased. Holliday said that SL Green’s internal forecast expects that number to rise to 90 percent by the end of the year. And he said to Sorkin that in addition to SL Green being back in the office, most tenants in its portfolio have begun making hard plans to return.

In addition to this, SL Green also announced it was selling interests in two of its properties: the apartment tower Sky on the far West Side and 400 East 57th Street, to The Moinian Group and A&E Real Estate, respectively.

“The sales of our interests in these two properties are a continuation of our strategy to divest non-core assets, including residential properties, and reinvest the capital on a value accretive basis into our share repurchase program and development projects,” SL Green Chief Investment Officer David Schonbraun said in a release about the deals.

SL Green isn’t the only one gearing up for a brighter future. This week, the MTA released two proposals for the renovation of Penn Station, the idea being to bring better light, passenger access and retail options to the station.

And Robert Knakal gave reasons for optimism in the Manhattan investment sales market in his most recent CO column, despite some disappointing first-quarter numbers.

Plus, despite coming off a year when everyone stayed home, it hasn’t affected the underlying real estate for car washes, which have been proving to be one of the most durable asset classes in the industry.

No, not everybody had a great week.

Aby Rosen, for one.

Industrial and Commercial Bank of China (ICBC) filed a lawsuit in New York County Supreme Court on Tuesday to foreclosure at RFR and Vanke US’ Midtown luxury condo development at 100 East 53rd Street.

But that’s not all. RFR could lose the Gramercy Park Hotel ground lease after Solil Management filed suit in the same court, claiming that RFR defaulted for allowing the property to “fall into a state of utter disrepair,” and that Rosen was using the property as his own personal hangout, comping meals at the restaurant and allowing his mother to stay in the hotel rent-free.

Another week, another insanely valuable SPAC deal. In this case, it was the home automation provider SmartRent, which will merge with Fifth Wall in a $2.2 billion deal.

There are so many of these SPAC deals and multibillion-dollar valuations that it’s difficult to keep up. This week, CO broke down the story of Luke Schoenfelder and his proptech company Latch’s $1.5 billion valuation.

But the investments in proptech are not strictly about the Benjamins. There are plenty of investors who are jumping into proptech designed to make buildings greener. (Which, we should add, is going to be a major issue going forward as New York City’s LL97 regulations begin to bite. It’s an issue that the mayoral candidates are thinking about, too.)

“The consumer is really primed to jump back into retail,” Datex CEO Mark Sigal told Commercial Observer. “More so than anything, getting the vaccine at scale enables the country to reopen. It’s like oxygen in a room … And there is a tremendous amount of accrued consumer capital because we didn’t travel during the holidays. We didn’t have the normal spending patterns.”

We see it, too. In Miami, there has been a gold rush for restaurant space, as New York favorites like Cote and Pastis have begun laying down their roots there. Nightlife king David Grutman is eyeing the Punch Bowl Social spot in Miami’s Wynwood, too, for his next big thing. And, in New York, the Puerto Rican coffee purveyor 787 doubled its Gotham footprint and Hungry Ghost Coffee opened its second full-size Manhattan store at 315 Bleecker Street.

We’ll raise our Sunday coffee to that!