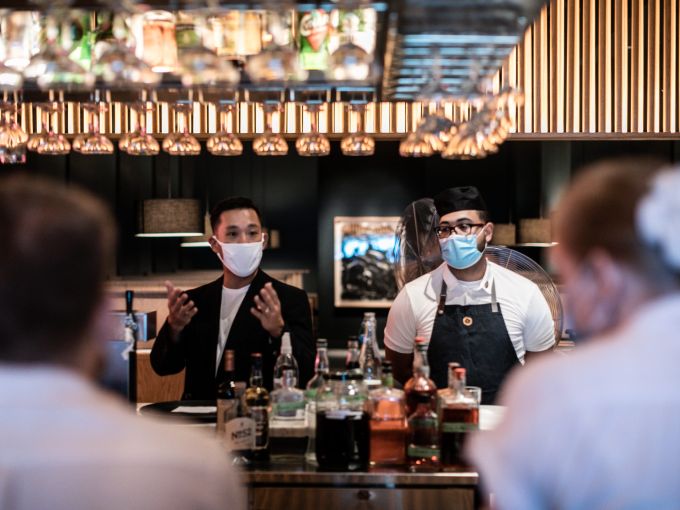 It’s booked solid for a month in advance — inside at full capacity with no social distancing. Cote, a New York-based, Michelin-starred Korean steakhouse, opened its Miami branch in the swanky Design District on 3900 NE 2nd Avenue, in February.

Miami’s restaurant market is thriving, in stark contrast to culinary epicenters, such as New York City, where eateries have struggled to make rent. Miami has seen a rash of new openings — some that were delayed by, and others that were inspired by, the pandemic — as New York restauranteurs compete to open eateries in a city marked by lax COVID restrictions and a clientele eager to dine out.

Operators are even launching bidding wars to take over spaces with a premium on so-called second-generation spaces, spots that are already fitted out for restaurants and come with permits and infrastructure, allowing restaurants to open up fast.

In Edgewater, a bidding war erupted for a second-generation space located on NE 2nd Avenue between 23rd and 24th streets after sitting on the market for three days. Broker Mauricio Zapata of Chariff Realty Group said he could “pick and choose” the future tenant, as three restaurateurs, one of whom was from New York, fought over the space. The winning bidder agreed to pay the full asking rent.

Pre-COVID, Zapata predicted the property would have sat on the market for months before receiving serious offers.

At the city’s northern tip, 8001 Biscayne Boulevard is currently home to Italian restaurant Sottosale. And yet, the space is drawing interest since the tenant set up grease traps, a professional kitchen and a bar area, landlord Shane Neman explained.

“I’m getting cold calls from restaurant and hospitality groups offering me higher rents than what I’m receiving now,” Neman said. Their letters of intent and proposals “are each better than the other,” with some offering to pay upfront in the form of key money, he added.

Wynwood is on track to welcome a record number of new restaurants by the end of 2021, said Albert Garcia, chairman of the Wynwood Business Improvement District. Newcomers include New York staples Prince Street Pizza and French bistro Pastis.

To be sure, Miami’s broader retail market has taken a hit during the pandemic. Asking rents for Miami retail space fell to $37 per square foot in 2020’s fourth quarter, down from $39 a year ago in 2019, while vacancy rates increased by 0.5 percentage points to 4.8 percent over the same timeframe, according to a report by MMG Equity Partners, a Miami-based investment firm specialized in South Florida commercial properties.

That compares with an 8.9 percent decline for asking rents in Manhattan’s retail market between the final quarters of 2019 and 2020, according to a report published by CBRE. The borough’s most popular shopping districts were some of the hardest-hit areas with asking rents dropping to levels “not seen since 2011,” the report said. SoHo’s Prince Street and the Meatpacking District’s Washington Street saw 41.2 and 22.2 percent declines, respectively.

Florida restaurants can operate at full capacity indoors, making open Miami a compelling alternative to closed-up New York. (About 92 percent of New York restaurants could not pay their full rent in December, according to a survey by the New York City Hospitality Alliance.) Since November, the number of seated diners in South Florida has outpaced the number nationwide, according to data compiled by CBRE and OpenTable.

New York restaurants have taken note. The city’s upscale eatery Carbone took over 49 Collins Ave. on South Beach from the Upland, allowing it to serve meals within three months of signing the lease. This past winter, Upper East Side French bistros Le Bilboquet and La Goulue opened outposts in ritzy Palm Beach, a wealthy island town 70 miles north of Miami.

While Miami’s restaurant scene is abuzz, some say the frenzy is peaking, given the rush and speed at which establishments are sprouting up. F+B Hospitality’s Bendersky fears the market for restaurant spaces is a “bubble.” As the vaccine rollout speeds up and major cities like New York open up, Miami will face renewed competition. When snowbirds move back north this summer, it will test the market’s strength, Bendersky said.

At his restaurant, where its signature steak costs $58, reservations open a month in advance. For April, almost all slots are taken.

The restaurateur began scouting for Miami real estate two years ago, well before the current boom. He believed Miami was already showing promise of being a full-fledged cosmopolitan center, with New Yorkers fleeing high taxes. And the pandemic has accelerated those trends.

Kim does not fear competition from the Big Apple. “If New York reopens, Miami doesn’t need to shrivel,” he said.