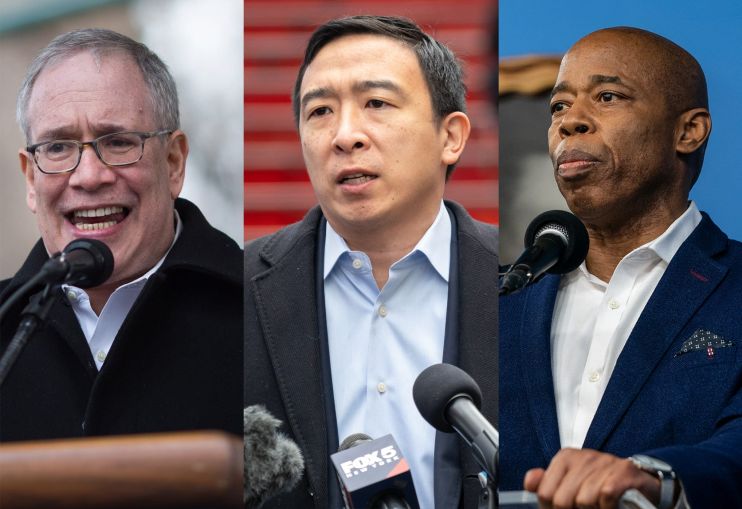 New York City’s real estate community hoped Albany lawmakers might save them from looming environmental fines, but a late-breaking budget maneuver has them looking toward the mayor’s race instead.

Building owners worried that they would have to start paying hefty penalties under the city’s 2019 emissions rule, known as Local Law 97, if they didn’t reduce their carbon footprint.

So they pressed Gov. Andrew Cuomo earlier this year to add a provision to his budget proposal, allowing developers to buy renewable energy credits from upstate New York wind and solar plants, instead of spending millions of dollars to renovate inefficient properties.

But environmental advocates argued in February that the governor’s bill would allow owners to utilize five to six million energy credits, enough to meet their emissions goals through the rest of the decade and render the city law useless.

The Cuomo proposal remained through the final days of budget negotiations, until Democratic lawmakers snuffed it out before passing the $212 billion bill in early April.

“Local Law 97 was years in the making, the result of painstaking work and thorough analysis by many people, and to swoop in and try to override it through the state process was a huge mistake,” Queens state Sen. Michael Gianaris said in a press release on April 14.

Real Estate Board of New York President James Whelan, whose trade association represents an array of property owners, brokers and managers, pleaded for the city to rework the law without punishing those making an effort to cut emissions already.

“It is becoming increasingly clear that the next mayor and City Council will need to address the mistakes of its predecessors and meaningfully address our climate crisis,” Whelan said in a statement. “We are ready, willing, and waiting to work with the city to seriously deal with our urgent environmental issues.”

Resolving the climate crisis won’t get any easier.

The pandemic severely curtailed commuting and travel, reducing greenhouse gas emissions 10 percent globally. But the city’s progress in reducing fossil fuel use also slowed over the past year, after officials eliminated parts of its recycling program, and quarantined New Yorkers used more energy at home.

The city’s largest source of carbon emissions remains its building stock, too, which accounted as of 2019 for 68 percent of the total, far higher than the national average of 40 percent. Cars, trucks and buses comprise 28 percent of the city’s fossil fuels, which is lower than more sprawling metropolitan areas.

Local Law 97 is supposed to counteract some of that pollution, with a goal of cutting building emissions 40 percent by 2030 and shrinking them 80 percent by 2050.

Under the rule, Mayor de Blasio’s administration has targeted buildings of at least 25,000 square feet with carbon caps beginning in 2024. Building owners will have to pay $268 for each metric ton their site’s carbon footprint exceeds the limit each year.

The key to lowering emissions will be how quickly owners can electrify their buildings to provide heat and hot water. That could involve changing steam radiators over time to electric heat pumps that plug into a grid.

“It’s our biggest issue. We could have a 100 percent renewable grid, and this issue would still remain because it’s outside the grid,” John Mandyck, CEO of environmental advocacy group Urban Green Council, said. “We have to find a way to convert the fuel source to something more renewable, like electricity that’s powered by wind, solar or hydro.”

Advocates also want to ensure the city has enough funding, so its building inspectors can implement emissions rules, and the city’s workforce has training to retrofit buildings and make other upgrades.

“These are very complicated issues. We need to make sure proper resources are in place for the Department of Buildings to do the analysis and do the job,” Mandyck said. “Training is necessary to upgrade job skills throughout the city to upgrade the efficiency for buildings for sure.”

Property owners and environmental advocates agree that carbon emissions must be drastically lowered going forward — and some common ground exists to get there.

Real estate lobbyists point to energy-efficient buildings, like One Bryant Park, that are on track to rack up enormous penalties, despite being one of the few commercial towers to have achieved LEED Platinum status, a designation for a structure’s environmentally friendly design and construction. The building uses an enormous amount of energy because it is densely populated, and houses data servers that need to be powered and cooled.

“They’re running global operations [for huge companies] there,” Zachary Steinberg, REBNY’s vice president of policy, said. “The challenge for them is [that] it’s not about their efficiency; it’s about how much energy is used and how dense it is. That’s the biggest issue for our members.”

One solution may be fixing disincentives for density and energy use in the existing law by broadening the types of categories for carbon caps. Office buildings, for instance, are measured under the same emissions-per-area formula, which doesn’t take into account whether the space contains a lot of refrigerators, like a supermarket, or a room full of computer servers.

Other ideas from advocates include carbon trading between buildings, where one property owner, who can’t meet the emissions cap, pays another who has the ability to go below the limit, and reinvesting fines toward upgrading buildings with older, below-market units. And some real estate leaders have floated tax offsets and grants to help less-profitable landowners meet energy requirements.

“If a property owner doesn’t have finances to convert, what are the options here?” Jay Martin, executive director of the Community Housing Improvement Program, which represents the city’s rent-regulated owners, said. “These are not climate-change deniers by any means, but it’s mathematics. The more mandates the city puts in, without helping them comply on the financials — it’s a real issue.”

It’s entirely down to the next mayor to ensure multifamily residences and office buildings meet these energy standards. Several candidates have staked out positions on how they would do that.

Scott Stringer, the city’s comptroller, and Andrew Yang, a tech entrepreneur, have pledged to follow the current emissions targets outlined in the city law.

“Local Law 97 is a critical tool in our arsenal, but it requires a mayor who knows the details and has the courage to enforce it, who will marshal every resource the city has at its disposal to truly deliver a Green New Deal to New Yorkers,” Stringer said in a statement.

Eric Adams, as Brooklyn borough president, has worked with the state’s Energy Research and Development Authority to provide envelope improvements and air source heat pumps for residential and commercial buildings in several neighborhoods. During his campaign, he has also focused on constructing manufacturing plants that build wind turbines in the city’s ports.

“We need to think bigger than simply fining building owners who fall out of compliance with the law here, and would look at earmarking penalty funds toward specific sustainability initiatives,” Donovan said. “It is also critical that we ensure equitable implementation of this law.”

The next legislative fights will be over fossil fuel hookups in new buildings and gut renovations, and bringing the vast majority of the city’s aging building stock under compliance. Then, there’s the city’s electric grid, which would need to be upgraded to meet surging energy demand, as buildings are converted from gas and oil to electric hookups.

Costa Constantinides, a former Queens councilman who authored Local Law 97, believes the city can make headway reducing emissions by retrofitting its own buildings, including schools, warehouses, and offices. He isn’t opposed to tax incentives either, as long as they don’t enrich those with healthy profit margins.

“We’ve seen a lot of buildings whose owners have criticized the law, but it was very achievable for them to meet these goals,” Constantinides said. “I don’t want their money, I want their carbon. The sooner they resign themselves to the fact that this is the law of the city of New York, the better.”

UPDATE: This article has been updated with the correct 40 percent by 2030 target the city is aiming for with building emissions. It also includes an updated figure on how big a source of the city’s carbon emissions buildings are.