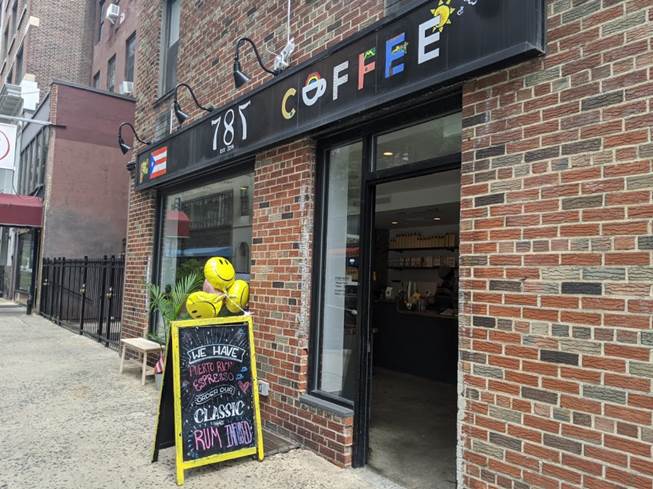 Brandon Pena and Sam Sepulveda opened their first coffee shop in the East Village with a mission: to bring Puerto Rican coffee to the city.

They called it 787 Coffee, after Puerto Rico’s area code, and the coffee was supplied by their own farm in Maricao.

“I fell in love with Puerto Rican coffee,” said Pena, adding he also became enamored with the coffee culture on the island. “They drink espresso all day long. You find it in every mom-and-pop store, in every corner store.”

By the time the coronavirus pandemic had begun, 787 Coffee had expanded to four locations. Since then, that’s doubled, as the two partners leased up coffee shops that closed in the wake of the shutdowns, allowing them to save up to 75 percent on buildout costs and expand more rapidly than expected, Pena said.

Pena was forced to close all 787 Coffee stores during the spring shutdowns to quell the spread of COVID-19, but opened again as soon as it was feasible. Then, they started their expansion.

Some of 787’s new leases include a 400-square-foot storefront at 100 Lexington Avenue that opened in August 2020. It was formerly a Black Press Coffee Shop, which never reopened after the shutdowns.

The team also leased a 250-square-foot storefront at 340 East 70th Street in Lenox Hill, formerly Capo, and took over from Champion Coffee at 319 East 14th Street. A fourth lease was signed at 30 Broad Street in the Financial District. Albert Halawani of Kassin Sabbagh Realty represented 787 in all of their deals.

Puerto Rico used to be one of the world’s largest coffee exporters, but that changed over the last century. Once it became a territory of the United States, coffee production continually declined.

“As a Mexican, I’ve been able to travel the world, and see tequila and tacos and Corona everywhere,” Pena said. “But I’ve never seen anything from Puerto Rico.”

That’s why he and his partner, who is Puerto Rican, started the business — but the economics of sourcing coffee from the territory are difficult. Because Puerto Rico is subject to United States taxes and rules, it can’t compete on price with the top coffee importers in the country: Colombia, Brazil and Central America.

In order to make the economics work, 787 Coffee has to cater to the specialty coffee market, said Pena. “Our primary market is coffee lovers; our second market is Puerto Ricans.”

At first, 787 Coffee started with several pop-ups throughout the city while they built up their coffee farm, called Hacienda Iluminada. Then, in 2017, the farm was almost entirely destroyed by Hurricane Maria, which dealt a blow to coffee production in the region overall. Nevertheless, by 2018, the farm was back up and running, and producing enough coffee to start a subscription business.

The shops are all designed with a colorful and friendly scheme, and the menu includes a variety of standard coffee shop staples with a Puerto Rican twist: a horchata latte; rum-infused cold brew; and coquito, a Puerto Rican coconut eggnog.

Pena and Sepulveda are searching for more locations in Manhattan, and want to expand to Brooklyn and other markets as well.

While they’re looking forward to expanding, it also comes with new challenges, including growing enough coffee to supply all of their shops.

“We have to continue to grow the farm so we can continue to open new locations,” Pena said. In addition, they have to maintain the core of their business, which was to spread both the flavor and the culture of Puerto Rican coffee.

“One of the things we have in our mind is: Are we ready for growth? Can we continue to be a human brand before a corporation?” Pena said.