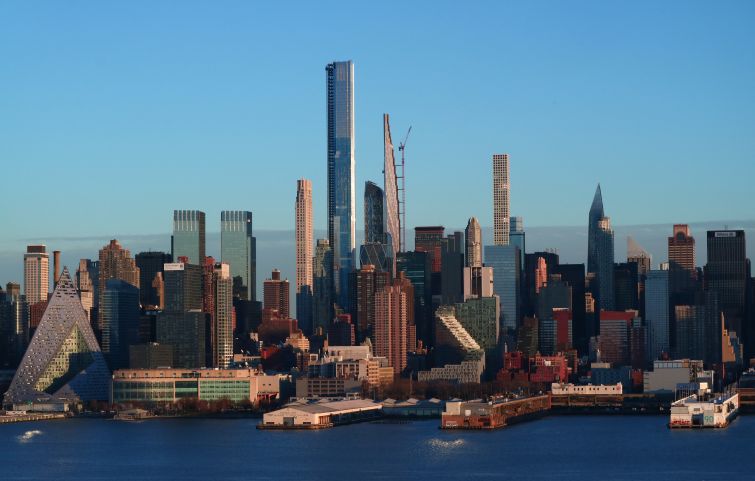 Many a Manhattan condo developer has chewed their fingernails down to the quick waiting for COVID-19 precautions to ease up, because no matter how rich some overseas magnates might be, they’re still not going to buy an apartment that costs tens of millions of dollars over Zoom.

Is the great fingernail gnawing of ‘20/’21 finally coming to an end?

“There was a major uptick around Q4 of last year,” The Corcoran Group’s Tara King-Brown told Commercial Observer late last month. The omicron variant put the brakes on this, but interest rebounded in recent weeks.

“My feeling is that by the end of Q1 we will definitely see a nice increase in the international market,” King-Brown said.

And King-Brown is not just speaking from instinct; there are solid statistics to back her up about the overall health of the high-end condo market. According to Miller Samuel, luxury Manhattan home sales (which is defined as the top 10 percent of the market) were up 87.4 percent annually in the fourth quarter of 2021, and international buyers are almost certainly picking up some of these units. Developer Michael Shvo said that approximately 75 percent of the buyers at his new Mandarin Oriental in Midtown were international.

International buyers and deals were very much on CO’s mind this week as we put out our global issue; indeed, real estate is not as local as the received wisdom would have you believe.

We did our own little bit of fretting about whether the deterioration of the Chinese super-developer Evergrande would touch the global real estate market. (Short answer: not really.)

We also thought a bit about Europe. In December 2021, some 15 London buildings worth a combined $1.2 billion changed hands, bringing overall volume for the year to $10.4 billion, with the British capital seeing a 68 percent increase in office investment from 2020, according to Savills. The activity, the focus on sustainability in the buildings, the types of tenants and more are starting to look … well, a lot like New York!

Speaking of the Brits, what started as a British firm, Cain International, has become a major player in Miami real estate with Justin Oates leading the way, bringing blockbusters like 830 Brickell to the fore. We spoke to Oates about his new position at Cain.

Plus, private equity behemoth the Carlyle Group shelled out three big ones (billions, we mean) on 18.3 million square feet of net-leased office, entertainment and industrial properties from iStar.

Yes, high-priced condos are turning a corner, but that’s not so surprising given that multifamily development in general had a record year in 2021, we learned last week.

Indeed, in terms of construction starts, New York is beginning to see numbers we haven’t seen in a while. According to the Real Estate Board of New York, the city saw 665 permits filed with the city’s Department of Buildings last quarter (the majority in Brooklyn, Queens and Staten Island); this was up 37 percent from the third quarter and up 22 percent annually, and REBNY noted it was the highest number of filings for new buildings in a single quarter since 2016 and was up 32 percent against the average since 2008.

But, wait, there are more records that keep getting broken!

In Broward County, Fla., Equus Capital Partners just surpassed a 2021 industrial record for the region when it shelled out $239.2 million for 16 warehouse complexes.

Nationwide, we learned from a recent Savills report that industrial vacancies hit an all-time low of 4.4 percent in the fourth quarter of 2021 despite the hundreds of millions of square feet added to the market and rents up nearly 20 percent in some cities.

Truly, it’s amazing seeing some of the industrial deals that are coming through: Bank of America just loaned $455 million to Robert Martin Company to recapitalize its Westchester industrial portfolio; and Zenith IOS announced a joint venture this week with JP Morgan Chase to buy $700 million in industrial outdoor storage (they’re expecting to close over $125 million of acquisitions by month’s end).

If you can go out to eat, you can go to your office. That’s what Gov. Kathy Hochul said in so many words at a breakfast this week at the New York Athletic Club.

“The restaurants are packed, you can’t get a hotel room, but people don’t want to go in to work,” Hochul said. “So they’re here. They just want to keep sitting in their apartment.”

Well, at least some companies are planning for a future in their offices.

The former Tammany Hall building at 44 Union Square finally found a tenant for its space (Slack walked away from a deal back in 2020 in true slacker form): Petco! The company is taking 30,000 square feet. And it probably has something in its inventory to keep the Tammany tiger at bay.

And London-based investment manager Steadview Capital Management is opening its first 9,943-square-foot U.S. office at 817 Broadway (see what we said about London!).

As we prepare for next week’s Super Bowl (we’re not ordering chicken wings this year!) it’s also worth thinking about the future of football.

Like: Why can’t the recently renamed Washington Commanders be in Washington, D.C., and not FedEx Field in Landover, Md., where the franchise has played since 1996?

At least this very much appears to be on Mayor Muriel Bowser’s mind.

Of course, there is another big real estate / football story brewing. Related’s Stephen Ross, who moonlights as the owner of the Miami Dolphins, has been accused of offering money to the team’s coach, Brian Flores, to throw games in order to improve the Dolphins’ draft prospects. He’s also been accused of discriminatory hiring practices. Ross has denied the allegations.

“His allegations are false, malicious and defamatory,” the owner said. (Ross fired Flores after the latest regular season and before the accusations.)

We’ll see what happens. In the meantime L.A. County is gearing up for hosting Super Bowl LVI next weekend by … seeing big real estate transactions!

But back to next week’s big game: What does the Super Bowl winner typically do? They go to Florida! (To be more specific: Disney World.)

If the players are looking a little south of Orlando may we suggest Ocean Drive? It’s a little seedier and a little more exciting than Disney.