If You Can Dine Out, You Can Go to the Office, Hochul Says 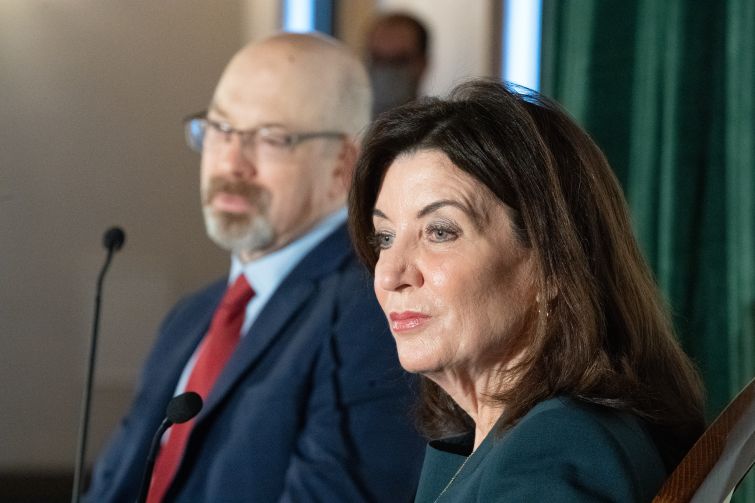 Hochul again pleaded with business leaders to get workers back to offices, repeating this message in discussions with Andrew Rein, president of the Citizens Budget Commission, a nonpartisan think tank, during a breakfast event on Feb. 3 at the New York Athletic Club in Manhattan.

“You know what’s fascinating, the restaurants are packed, you can’t get a hotel room, but people don’t want to go in to work,” Hochul said. “So they’re here. They just want to keep sitting in their apartment.”

Hochul talked about the executive budget for fiscal year 2023, too, but came back to expressing the need for office workers to prop up the real estate industry.

“Business leaders tell everybody to come back,” Hochul said. “Give them a bonus to burn the Zoom app and just come back to work.”

Hochul — who has been hitting all the right notes with leaders in the real estate industry since assuming the role in August 2021 from disgraced ex-Gov. Andrew Cuomo — previously called on Manhattan-based companies to require office workers to return to their offices after New Year’s. The rapid spread of the omicron variant derailed that.

Interestingly enough, Cuomo made a similar plea during virtual remarks to the Association for a Better New York last July: “We need private sector companies to say to their employees, ‘I need you back in the office.’” That appeal didn’t work either.

Even as cases of omicron have started to drop in New York, remote work has proven to be preferable for office employees. Concrete data is elusive, but it appears that most New York City office workers are steering clear of their workplaces, at least for part of the workweek.

Also during her breakfast remarks, Hochul touched on the notion that the state has to diversify its economy more, adding that progress has been made in beating other tech hubs like Boston in creating jobs in that sector.

“I’ve talked to a lot of business leaders about those who are thinking of leaving, those who’ve left, how we get them back, but also about new industries we can stimulate here,” Hochul said. “We need to diversify.”

New York, however, needs to be more business-friendly in order to draw new residents and keep existing ones from departing, especially those with ample resources.

“I think a lot of successful people, high net worth individuals, didn’t feel welcome in their own city,” Hochul said. “They had this sense that their success was being denigrated and that they weren’t welcome here. These are not just people creating jobs, they’re also the ones that are supporting our arts, our culture, our philanthropies. I can’t have them doing that in Miami, because that is going to hurt us as well.”

Hochul said other ways of diversifying New York’s economy include the state’s $500 million commitment to offshore wind farming and her proposal for the National Semiconductor Technology Center in Albany, N.Y., something for which she is requesting help from the Biden administration.