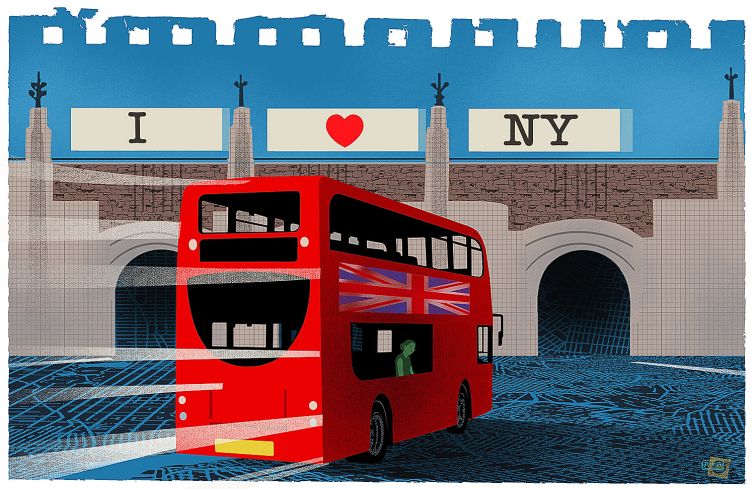 London and New York City share many similarities as hubs for the global financial sector and, it turns out, are also forging correlating paths with their office markets during COVID-19.

The United Kingdom and America’s most populous cities have had the same struggles getting workers back in the office amid remote working trends and flights to newer properties with modern designs. They also appear to be sharing a recovery trajectory that even omicron can’t derail.

“There are clear parallels in the improving occupancy levels and public transport usage as well as flexible working arrangements being adopted in New York City and London,” said Bill Sexton, CEO of Trimont Real Estate Advisors. “Elements of working culture have been impacted forever. Versions of flexible working are expected to be retained indefinitely by many employers, which will have an impact on the market.”

Still, even in the face of such uncertainties, New York and London remain strong office markets in terms of investment and leasing activity.

This was evident when tech giant Google opted to make big investments in both cities with a $1 billion purchase of London’s Central Saint Giles Building in mid-January and a $2.1 billion acquisition of the St. John’s Terminal Building in Manhattan last September.

James Beckham, CBRE’s managing director of investment properties in London, noted that the city’s investment sales ticked up to around $14.9 billion last year compared to $10.1 billion in 2020. The 10-year average annual office investment for London is $18.9 billion, according to Beckham.

“Gradually, it is stepping back up,” Beckham said. “We think this year it will get back to normal, even with some of the travel restrictions remaining in place.”

December was the London office market’s busiest month in 2021, with 15 buildings trading for a total of $1.2 billion, bringing overall volume for the year to 91 deals totaling $10.4 billion, according to Savills. Overall London office investment activity was 68 percent ahead of 2020, with North American investors the most active followed by domestic and European buyers. Investments in London were still 20 percent below the 10-year average, though.

London saw some large lease deals in late 2021, too, including Facebook taking 312,000 square feet at 1 Triton Square in the third quarter. The city had a busy fourth quarter with leasing activity reaching 3.4 million square feet, which was nearly in line with 2019 levels, according to Savills. An additional 3.2 million square feet is under offer at the start of 2022, per the brokerage.

Total leasing volume was up 88 percent in London last year compared with 2020 and is down 12 percent from the 10-year average. Philip Pearce, head of Savills’ central London office agency, said around 40 percent of the leases are derived from tech companies clustered mainly on the eastern side of London. Professional services firms like law and accounting took up around 26 percent of leases with finance and insurance comprising around 25 percent, according to Pearce.

“It is a pretty solid rebound from the height of the pandemic,” Pearce said. “Sectors that are considered to be heavily impacted by work from home, etc., have actually gone on to demonstrate that they’ve got a pretty healthy appetite for offices across central London.”

The volume of available sublease space has also dropped in London, to 5.6 million from 6.4 million last February.

Across the pond, New York’s office market gained steam in the fourth quarter of 2021, according to Savills, with leasing activity rising to its highest level since the start of the pandemic. Office demand totalled 9.3 million square feet for the final three months of 2021, up 20.8 percent from the third quarter and higher than the pre-pandemic fourth quarter average of 9 percent.

New York’s office occupancy rate increased steadily after Labor Day last year with a peak of 37 percent on Dec. 1, data from Kastle Systems show. The omicron variant spread rapidly through the city in mid-December, however, which resulted in reducing the number of workers in buildings as companies again reverted to more work-from-home strategies.

Pearce added that like New York, life sciences companies are looking to take up space in London from a low base level. And, like in New York, it will take time for the industry to fully make a dent in the city’s office market because of the challenges in finding the right-sized buildings to accommodate certain safety requirements.

Beckham said the overall impact of flexible working arrangements in London will likely eventually result in a 10 percent reduction in office space requirements, but stressed it will take time for the full impact on the office market to take hold since most leases are long term. He noted, though, that many developers may be reluctant to take on new office construction projects because of the unknowns in the market.

“Developers have been very cautious around spec developing new buildings because of the uncertainty around occupational criteria,” Beckham said. “In addition, we’ve seen build costs increase by 15 percent in the last 12 months so you have to be very careful about your appraisal in terms of having the right inputs. So the net result of that is hesitation in terms of spec development.”

Average office asking rents in New York increased 1.3 percent in fourth-quarter 2021, to $76.03 per square foot, marking the first quarterly gain for this metric in eight quarters, according to Savills. Overall asking rents still remain 9.4 percent short of pre-pandemic levels and Savills projects them to modestly increase throughout 2022, as the mix of available space shifts away from sublets and toward direct space.

London’s office rents for Class A office properties were up slightly last year from 2020 and 16 percent over the 10-year average, according to a late December 2021 report released by Savills. The average Class A rent stood at $86.80 per square foot as of late December. The rents reflect demand for such space.

“The percentage of space that’s leased across London in what we consider to be best-in-Class A office accommodations has never been higher,” Pearce said. “It’s a clear reflection that the occupiers recognize that in order to get people back to the office, they’ve got to provide them with the best-in-class process and also buildings that have best-in-class environmental credentials because that is increasingly important in terms of the corporate agenda in London.”

New York office landlords have also been touting the sustainability features of their properties and have been offering top-shelf amenities to attract tenants — everything from outdoor terraces to rooftop beehives to indoor golf. The same dynamic took hold in London before 2020 and only accelerated during the pandemic.

Sexton added that an increasing “flight to sustainability” began taking hold in London during the latter half of 2021. He said carbon emissions are starting to have “an increasing and material influence” on decisions of whether to sign office leases, which “will further pressure older, poorer quality office stock.”

While both New York and London experienced setbacks in drawing workers back to their large towers in late 2021, when omicron cases skyrocketed, analysts said the variant is not expected to have any lasting effects on the two cities’ office market recoveries. Those were well underway on both sides of the Atlantic before omicron.

“The steady return-to-office trend witnessed in both New York City and London throughout the second half of 2021 was abruptly reversed in December with the onset of the holiday season combined with the wave of omicron COVID cases,” Sexton said. “We anticipate this to be a short-term interruption and expect occupancy levels to continue to increase as the omicron wave passes, and governments and employers encourage staff back to the workplace.”